Problem with CORS on GeoServer running on Apache Tomcat

I am currently working on a little GIS web app using MapBox on the frontend and GeoServer as my WMS. I have GeoServer 2.15.0 running under Apache Tomcat 9.0.20. Both of them run on localhost but on different ports.

Problem is, when I want to get some data from GeoServer to load it into my app I get a CORS response.

I have followed many threads and the Apache Docs on how to enable CORS both for Tomcat and for GeoServer using the XML filter configuration. I've followed many answers but nothing seems to work.

As a side note, this only happens to me on Windows, at first I tested it on MacOS on my office computer and everything worked just fine on the first try. So then when I got home and repeated the process on Windows, it doesn't work, and I don't see what else I am missing.

This is the error I get on the console and the headers of the request. I am not sure if this is the best way to get JSON data from GeoServer, but it worked fine on the Mac. Following the recommendation, I deactivated Windows Firewall to test it but it still fails. 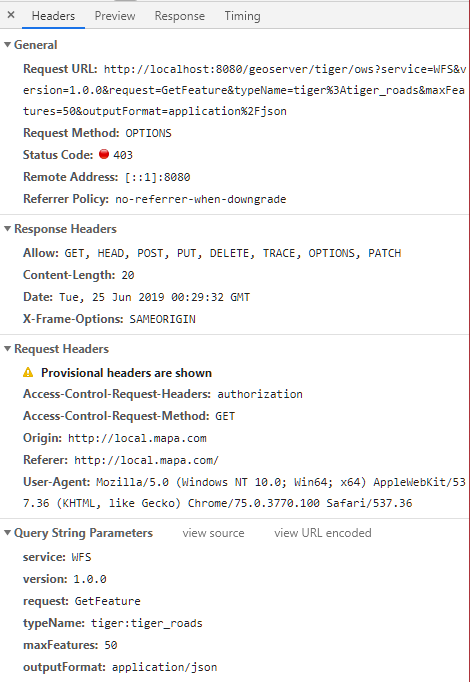 Browse other questions tagged geoserver windows tomcat cors or ask your own question.

2
How to can I run the OpenGeo Suite Community Edition under Apache Tomcat on Windows server 2003?
3
Error with GeoExplorer/GeoServer and Apache Proxy Authentication
1
Installing gdal to geoserver running with apache tomcat
2
Geoserver won't start after setting up CORS (no jetty installed?)
0
CORS ERROR with own WMS GeoServer layers
1
Deploy GeoServer inside Apache Tomcat in Google Cloud Platform