Questions relating to general IT or with no clear GIS component, are off-topic here but can be researched/asked at Stack Overflow (software development), Super User (computing hardware and software), Database Administrators (relational databases) and other SE sites

I want to generate a number of vegetation related indices (NDVI, NDTI, etc., min/max/avg/std (pixel values)) from earth observation data for a large number of polygons during the entire growing season, roughly between March and November each year. The figures are about as follows: I have about one million polygons. Every day I will get new EO data (Sentinel-1/Sentinel-2) for about 20% of them. For each of these polygons I generate 10-20 indices based on the EO data. This gives me appr. 2-4 million records, every day. That makes appr. 500 - 1000 million during just one growing season (I´ll need to store at least 5 seasons).

The infrastructure within which I have to operate is predetermined and will have to be something based on either Oracle(Locator) or PostGIS. Personally I´d prefer PostGIS since OpenSource allows for much more flexibility.

My initial idea is to create a PostGIS database, which is partitioned based on year value. I thought about creating one attribute table where I create a new row for each date and each interpreted property (polygon geometries+id are stored in a separate table). It would look something like this: 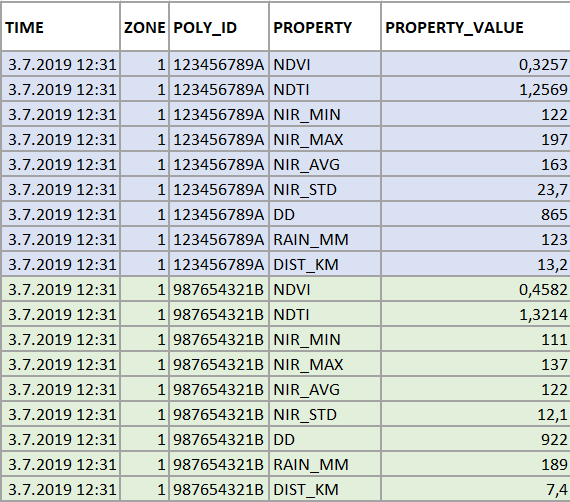 Since I have to do different interpretations depending on the geographical zone where the polygon lies, I also thought about creating a separate table for each zone. This will however make querying more difficult.

My questions are hence:

32
When should you NOT use a spatial index?
7
PostGIS Intersection and Summarise Attributes
6
Spatial index to speed up the query
4
Should slow refresh rate be expected while viewing 1000 points out of 100 million using ArcSDE/Oracle?
6
Leveraging capabilities of PostGIS for large (ish) tables in PostgreSQL?
1
Saving select query results (year wise) from PostgreSQL/PostGIS to text files
1
postgis st_intersection of linestrings geometric miscalculations
1
PostGIS speed up query
2
ST_Intersects slow across two tables