Pre-loading features in QGIS from geodatabase via XML file

The background: I've inherited a pretty handy plugin for QGIS and an associated an XML file. The plugin (among other things) when installed, will ensure that each instance of QGIS that you open has a selection of pre-loaded shapefiles - these are saved in various folders on the network drive. (For clarity, these are not loaded in the layer panel. Rather, they're nesting in a newly created 'contents panel' (for lack of a better term). To load them, all one simply has to do is click on the shapefile name in the 'contents panel' and presto, the shapefile will load in the layer panel and the map window.) Below is a screenshot of the 'contents panel': 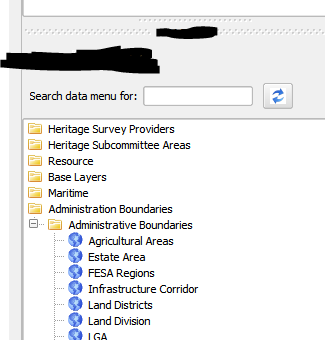 This all saves time for a lot of the team who are less familiar with QGIS from having to search various network files and folders.

If we receive a new shapefile that would be useful to have pre-loaded, all I have to do is edit the accompanying XML file. (i.e. I don't need to edit any of the plugin code). Screenshot of the XML code header and code that I was intending to use to pre-load GDB data:

As far as I can tell, the syntax and structure are what is specified in the header. (Despite what the screengrab shows, I'd tidied the bracketing and code to match that of the header code so bracketing isn't the issue and I have ensured that the syntax that I've used is correct.)

The issue: Which brings me to the problem that I'm having. I now wish to migrate some of these shapefiles to a geodatabase (I'm trying ESRI's file geodatabase as a proof of concept), however, when I edit the XML file to include for this (or any) geodatabase, the 'contents panel' doesn't update with the new feature class as I'd expect.

What I've tried: I've noticed in the XML file that the FGDB that is referenced is of a raster catalogue type rather than a vector type. I've edited the XML to account for this with no luck.

I've also tried adding the suffix .table' to the desired feature class, but this also doesn't help out.

Lastly, I tried referencing a geodatabase that was on the same network drive as the xml file, still no luck.

I am by no means a code or script person but can tenaciously plug away until something works, but was hoping that someone might have come across this problem before and have a ready solution/ explanation.

Browse other questions tagged qgis esri-geodatabase xml or ask your own question.

2
Why is an XML file with the same name being created when I save an MXD?
3
How to edit a given version of geodatabase?
3
How to Create a Version 10 File Geodatabase from an XML from ArcGIS 9.2?
2
Setting up file geodatabase API
4
Reading ESRI Geodatabase Metadata with QGIS
0
How to work with SHP+XML and several DBF+XML datasets
1
Exporting images attached to a geodatabase using QGIS
4
QGIS: Error loading NetCDF files