Topology Error (Must Not Have Gaps) encompasses extent of all existing features?

I have run into this before and simply marked it as an exception and moved on, but it puzzles and bothers me a bit so if someone can provide a reasonable explanation, that would help me. Surprisingly, I couldn't find a post related to it here or in Esri's online documentation.

When I create a topology and add the rule "Must Not Have Gaps", even with this 2-feature polygon feature class, there seems to always be one error that encompasses the entire feature class.

Can this error be effectively fixed?

I remember in the days of "Coverages" and ArcInfo Workstation that there was this concept of a "World Polygon" that represented the universe outside of your extent (and you were NOT to delete it). The only "reason" (for lack of a better word) for what I am seeing is that this is a manifestation or result of that same concept. Maybe it should be marked as an exception and I should just move on as I've done in the past. Comments suggesting things to try (especially if this isn't exactly the "non-error" that I've described), are welcome. I'm using ArcMap 10.6 for this. 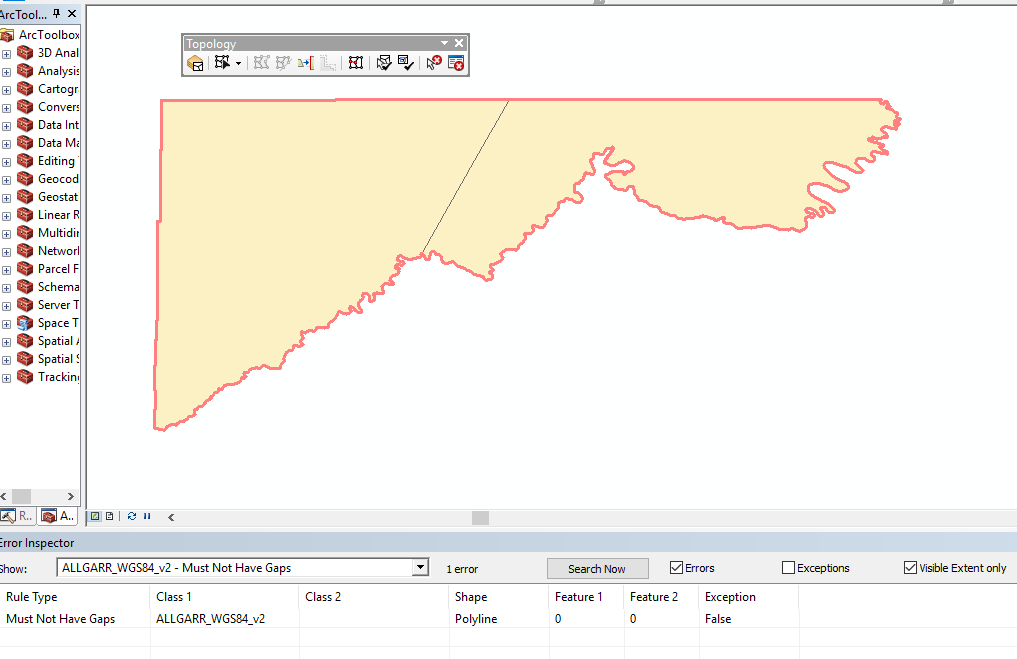 The answer to the question "Can this be effectively fixed?" is essentially no. The picture below illustrates why it is a good thing that the outer pink boundary is created by the topology and displayed and why only the user can determine if the exterior boundary shown contains an error or is as correct as it will ever be and is a topological exception. 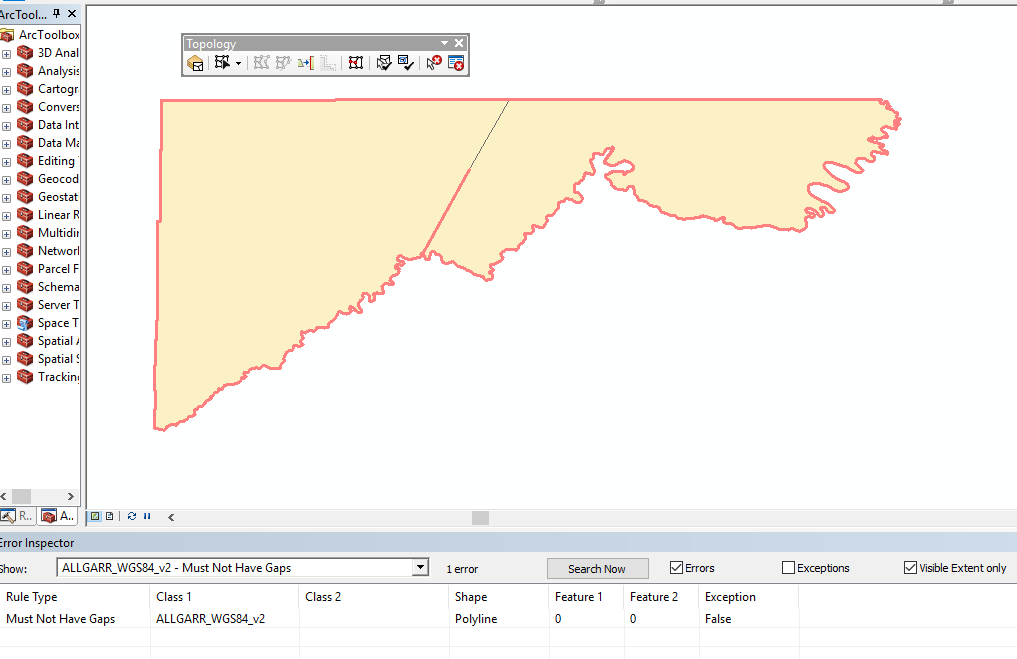 The pink line shown is all part of the exterior edge of the two polygons. The portion of the pink outline that seems to extend between the two polygons like a single straight line at this zoom factor might in fact be a gap that is perhaps 3 meters wide and 30 km long. This gap could be a topological error in the boundary created by merging two feature classes together that were independently created without topological control. However, this gap could represent the actual exterior boundary of these two polygons if the gap excluded a utility easement that belonged to another jurisdiction or was part of a gerrymandered political boundary that politicians have created.

If the topology automatically treated this topological boundary as an exception simply because it was outside of the interior extent of all existing features, the user might fail to zoom in to the actual gap that exists based on the incorrect assumption that the lack of an error means that the entire straight edge between the two polygons was a shared boundary between them. However, because this boundary is always shown unless the user explicitly marks it as a topological exception, it draws the user's attention to this gap.

If the user determines this gap formed by the exterior boundary of the features is an error, the topology provides tools that can assist the user in closing that gap or the user can fix the gap using other methods, such as cogo. Only after the user has modified the boundary to their satisfaction and validated it by rerunning the topology or determined that this outline is already as correct as it will ever be without closing the gap should this topological error be marked as an exception. Only the user can determine whether or not this boundary actually violates or is an acceptable exception to the "Must Not Have Gaps" topology rule.

Topologies are only effective if they draw a user's attention to all potential errors that violate the strict enforcement of the rules that the user chose and assist them in fixing those errors or permit them to mark them as an exception when the strict interpretation of the rule does not fit the user's needs.

Not the answer you're looking for? Browse other questions tagged arcgis-desktop arcmap topology or ask your own question.

3
Cause of selected [ArcSDE 10] feature dataset does not contain any feature classes which can participate in topology?
5
How to solve “Cannot create topology” in ArcCatalog?
1
ESRI ArcMap Topology rules on multi story buildings
0
Loading Topology to Parcel Fabric gives Must Contain Features Error?
1
All feature classes are not shown when creating new topology in ArcCatalog?
0
Adjusting / snapping a polygon to another in ArcGIS Desktop
0
Polygon topology validation in ArcGIS - whole study area artefact problem