I currently have a DEM for an east coast city. Unfortunately, the elevation of an area containing a Dam is not accurate. I have the correct elevations as reported by the city. How would I go about editing the elevation values of a specific group of cells so that they accurately reflect the elevation difference of the dam?

For example, here is a portion of the DEM, where the point is the dam: 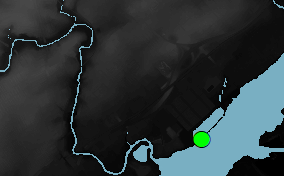 I need to find a way to select a subset of the nearby DEM cells and edit them so they are accurate with the dam heights.

How do I do this using ArcGIS Desktop?

The filter expression Elio Diaz is describing in the comments can be done via the Con (conditional) tool, either the standalone version or as part of Map Algebra. You would want to follow the examples for complex expressions described here, doing something like this:

Con(dam_layer == NULL, DEM, dam_layer)
(Where there are no dams use DEM, otherwise use the dam values)

This does require the dam values to be in a raster layer, which you could achieve via either Feature to Raster or Point to Raster, using the same environment settings as your DEM (specifically same projection, cell size, and extent).

EDIT: @Marcelo Villa pointed out that Jared wants to adjust the height of multiple pixels around the DEM, in which case you might want to manually create a polygon layer around each dam covering all the pixels to be updated, and then use Feature to Raster (or Polygon to Raster) on this layer instead of the dam points.

Not the answer you're looking for? Browse other questions tagged arcgis-desktop dem or ask your own question.