QGIS plugin: Set the size of the plugin when loaded and change the name

I have two quick questions with the plugin I built: 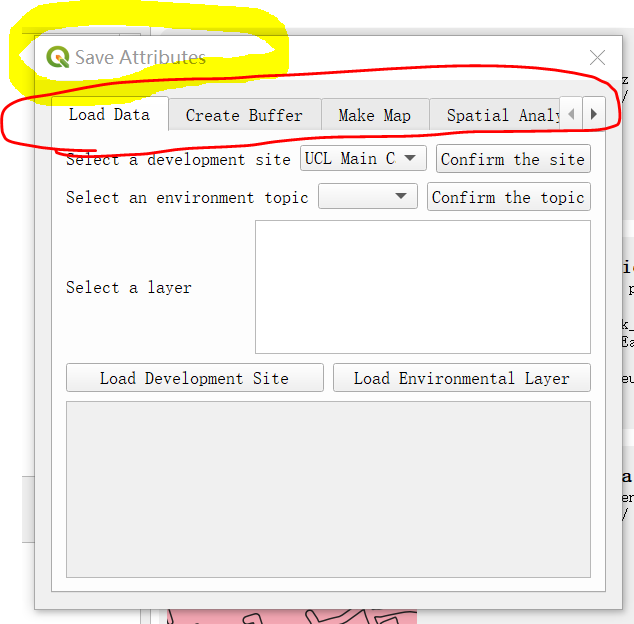 You can change the size (and position) of your plugin window fairly easily. You should be able to add the following line in the initGui() method of your main plugin python file (change the parameters to suit your needs):

*interestingly, it seems the exception to this is if you use a 0, 0 position which, on my Windows laptop at least, results in the dialog window locking perfectly in to the corner of the screen; while a 5, 5 position cuts off the window title bar.

As for changing the name, if you just want to change the title of the plugin dialog window (circled in yellow in your screenshot) you should get away with just adding another line to the initGui() method:

However if you want to change the name of the entire plugin everywhere including in the plugin manger etc. that would be a lot more tedious. If you used Plugin Builder, the generated files use the name you entered as your plugin name and this name is referenced throughout the plugin e.g. in the metadata, in the plugin dialog file to load the ui, in the main plugin file to import the dialog class, to add the plugin to menus and icons to toolbars etc. etc.

I suppose you could technically replace all references to the old name with the new, but this would be quite time consuming and prone to error and could cause the plugin not to load properly. In that case, it might be quicker and easier to run Plugin Builder again and generate all the necessary files with the new name and copy the code containing your 'plugin logic' from one to the other. If you spent a lot of time modifying the ui file in Designer, you could probably re-use that by renaming it and copying into the plugin folder.

Not the answer you're looking for? Browse other questions tagged qgis qgis-plugins qgis-3 qt or ask your own question.