I have a couple of satellite images, each about 1 km square, of the same rock climbing area. One is from ESRI Clarity, the other from Google Maps. The Clarity image is projected to UTM and has a UTM grid superimposed, which is extremely convenient for my purposes, but it was taken in winter when a lot of the rock was in shadow or covered with snow. The Google Maps one is much better for showing the features I want to see and locate.

The Google image didn't register correctly when framed on top of the Clarity one, so I thought, OK, this is just because the projection Google is using isn't UTM. I decided to try to handle this by locating control points that I could identify on the two images, and distorting the Google image to make these points match. Surprisingly (to me, at least), it became clear that this could not be done accurately using an affine transformation, i.e., one that sends lines to lines. Below is my best fit with 6 control points and a polynomial fit. On the left is Clarity, on the right is Clarity with Google superimposed as an inset:

It seems to me that the registration of the two images at the edges is rather good. However, some features still seem extremely distorted in one image compared to the other. The easiest to see is the long dark line marked by the arrows, which is the shadow of a natural wall running down the north face of the rock. In the left-hand image, it's the dark line that you see if you trace out the red arrow and then continue on in the same direction. In the right-hand image, it's a little harder to see at this scale, but it's the same idea.

Now the two lines are not parallel at all. They differ by about 10 degrees. This is not just because I distorted the image with some goofy polynomial fit that might oscillate in an unrealistic way. In fact, the rotation of this feature is even more severe in the original Google maps image -- more like 20 degrees.

How should I interpret this? My guess is that ESRI made an effort to correct for perspective and the motion of the satellite as it scanned over the landscape, while Google did not, or didn't do it thoroughly enough. This might not be a problem in most cases, but this rock sticks up about 200 meters above the surrounding landscape and has steep walls. This would explain why I'm able to make things mesh fairly well on the surrounding terrain with a relatively gentle curvilinear transformation, but I still get crazy disagreement in the central area of steep terrain.

I did some reading online, and I think the answer is probably as follows. A satellite photo is taken from a high elevation, but not necessarily from the zenith of the point being imaged. The angle with respect to the zenith may be something like 30 degrees. This causes parallax displacement, which has to be fixed in orthorectification. Orthorectification, however, presupposes an accurate elevation model. This page at Satellite Imaging Corp. has some helpful sample figures and shows a sample image from DigitalGlobe, which they orthorectified. I don't know if they're the actual company that does the orthorectification for DigitalGlobe, but DigitalGlobe (parent company Maxar) is the source of the Google Maps image I was using. They give an example of a geometric error of 600 m if the vertical relief is 1 km and terrain distortion isn't corrected for, if the satellite is at 30 degrees from zenith. They say they usually use a DEM with a resolution of 90 meters, although they may use other data sources if the terrain is rugged.

In my example of the wall on the north side of the rock, the slope of the terrain is about 1.0, which means that a DEM resolution of 90 meters is likely to give errors in elevation on the order of 50-100 m. Scaling down Satellite Imaging's numerical example, this might be expected to produce parallax displacements of 30-60 m. Such a displacement is plenty big enough to explain the effects I've described in the question.

The remaining question that I don't know the answer to is whether or not the ESRI Clarity image has better orthorectification, or whether it's just a different orthorectification, not necessarily a better one. This could also be a matter of luck, if the different satellites were at different angles with respect to the zenith when they took these particular images. 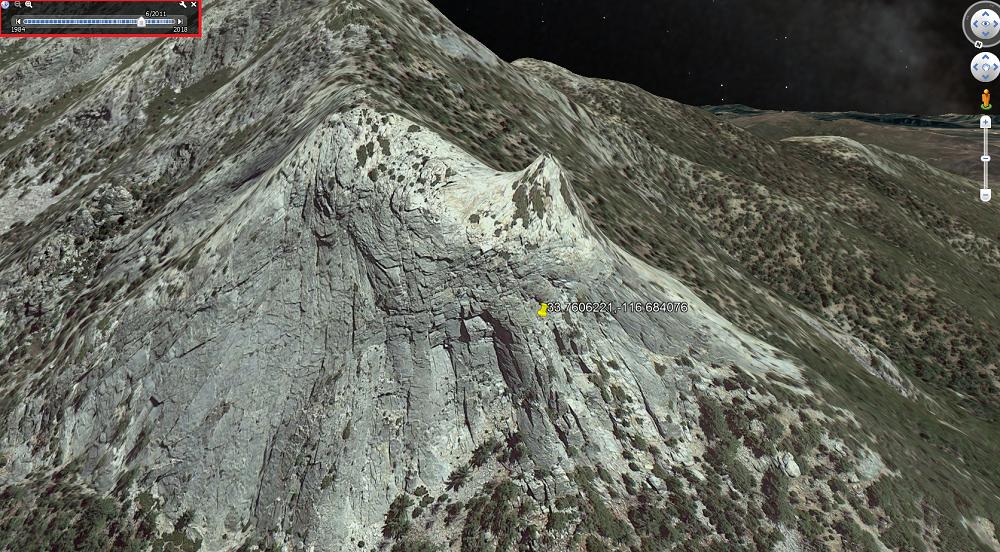