Updating Z coordinates of points in polygons with ArcPy

I am trying to update Z values of polygon shape with ArcPy. This script is working without error but increasing the first (0 position vertex) vertex twice. I want to update only once. How can I avoid it? 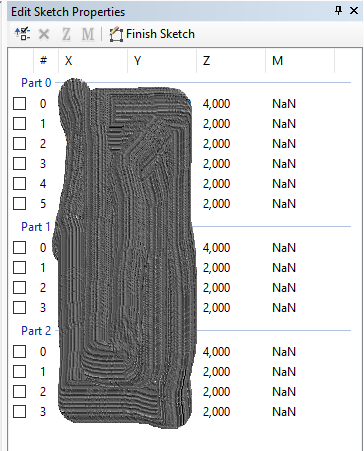 I wanted to insert a new answer rather than editing my previous one as this comes with a new solution that should handle the problematic of updating the geometries of polygons with more than one inner ring as well.

The OP in the comments pointed out that my other answer didn't work for the case "two donuts in one polygon".

Trying myself I was susprised but today I realized this problem has already come up previously in this other question where a solution is also provided.

I'll highlight the key part that makes the code you are about to see working with all types of polygons (single-to-multipart, zero-to-many inner rings):

The modified working code of my previous original answer is shown below:

Your case is very interesting to me as it reveals that explode_to_points=True is indeed "deconstruct(ing) a feature into its individual points or vertices." (as stated in the arcpy.da.UpdateCursor help).

as in a Polygon, the first and last vertex of a feature (and all its parts) are coincidents, it seems that updating the geometry of the first vertex automatically updates that of the coincident (last) vertex. Thus, when you reach the last one which has already been shifted, it gets shifted again.

in ArcMap, I have a simple one feature, one part polygon. If I start an edit session and see its vertices, I can see it has 4 vertices.

But when I build a cursor and print all its same vertices, I can see there's one more at the end, which is coincident with the first one.

This was also already discussed in this post I just discovered. 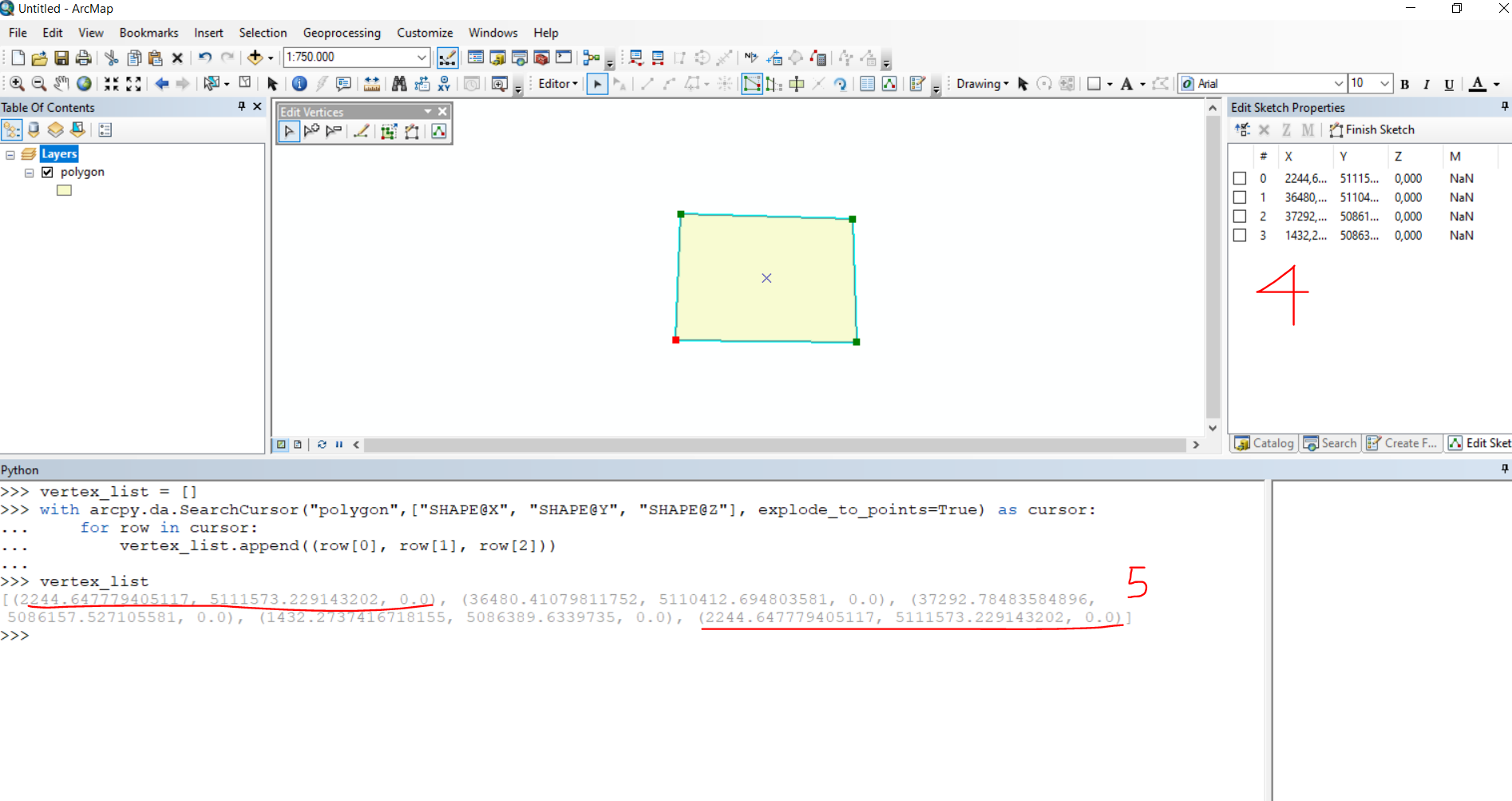 Even if you avoid using the explode_to_points=True thing and go through each point in each part explicitly, you'll get the same result unfortunately.

Here you can see the same problem (code adapted from here): 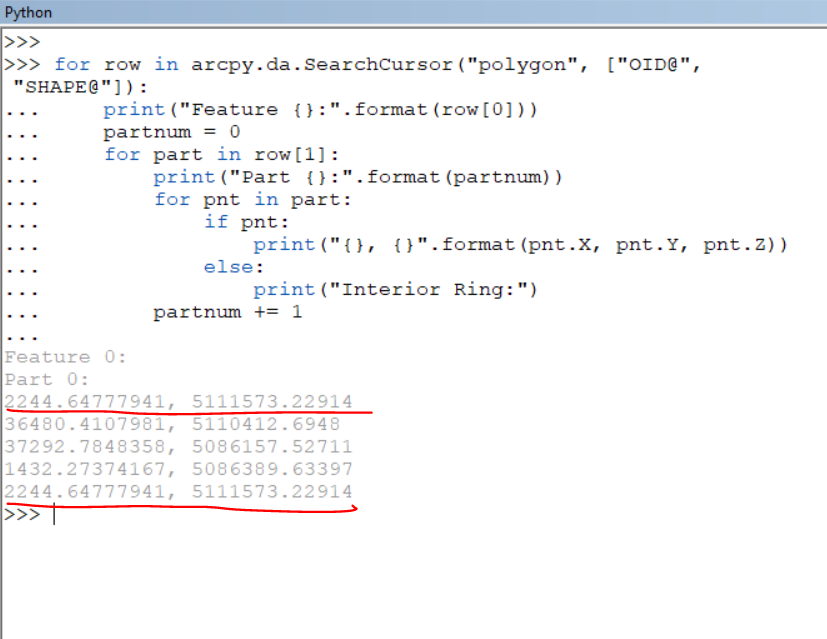 This seems to me a real problem that should be handled differently by ArcPy.

I guess we're left to avoid touching the first vertex of each part. Something like the same example above combined with this SO answer should work:

After running this on a single feature shapefile with two parts each with one donut I was able to see the updated Z correctly. 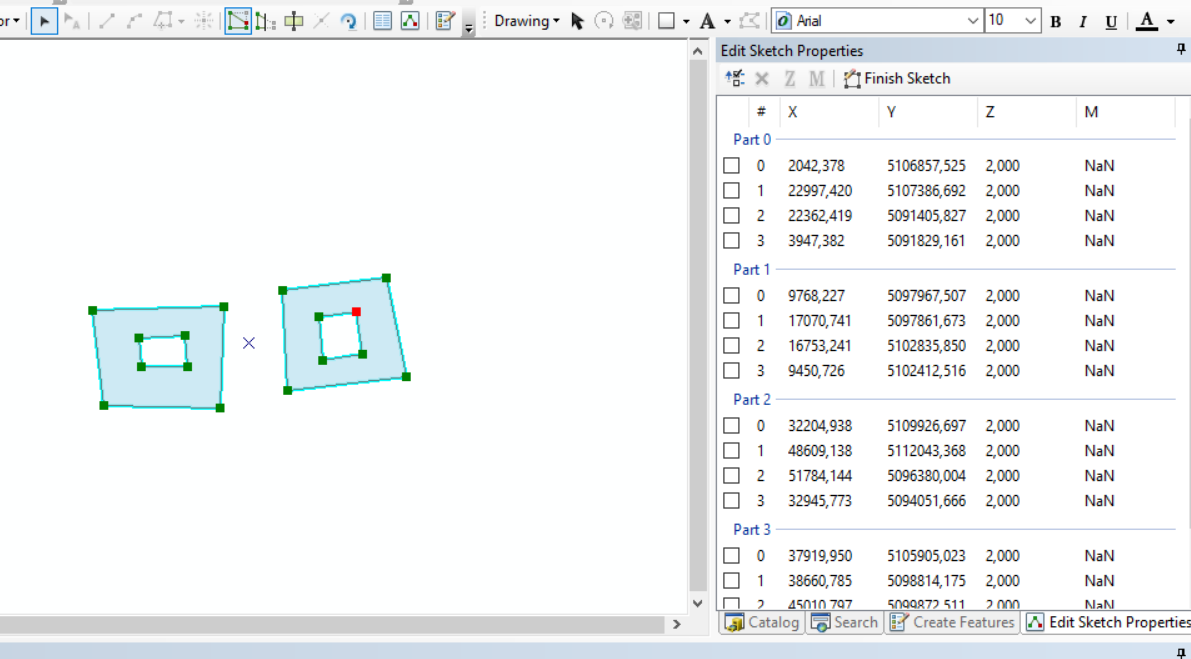 Not the answer you're looking for? Browse other questions tagged arcpy geometry cursor or ask your own question.

5
ArcGIS 10.0/arcpy: How to create a polygon geometry from inner and outer ring point arrays?
0
Update Z values of polygon veritices with multiparts and donuts
1
Updating Z values with geometry of multipart and donut polygons with ArcPy?

4
From featureclass (or shp) to WKT e GeoJSON
1
Error adding row - sequence size must match size of row
1
Grabbing value from field and input into SearchCursor then selecting results for further analysis in ArcPy?
4
Time Delay in Importing ArcPy
0
Update Cursor to Polyline Creates Records with Missing Geometry
1
Getting an IOError in Arcpy
3
Writing Data Driven Pages' scale into driving layer's attribute table with arcpy
3
Comparing value with value from the next row
0
Switching from Nested Search Cursors to Dictionaries
0
Iteratively Filling a Dictionary and Updating a Feature Class