Has anyone seen the following problem?

I've created a sample ArcGlobe application with Visual Studio - this obviously gives me the template where I should be able to launch the app. Said application launches, I then go to load a .3DD File from the preexisting samples that come with ArcGIS. I try loading the .3DD file, the APP hangs for a bit and eventually the Globe Control comes up.

When this happens, I see the World Physical Map (layer ) and the US Elevation (layer). But the weird thing is is that the screen is black. If I uncheck the layers, then I get a wireframe globe with no data displayed.

You might try looking at your internet blocking as I am sure that these layer come from arcgis online. Can you open a globe from the start menu?

new info... I don't play with globe much. But here is what i found on the esri resources page...

Data caching The GlobeDisplay object has a central role in managing and controlling tile generation and in the subsequent storing of data tiles for future use, called data caching. Data tiles are always stored in a memory cache and, optionally, in a disk cache. The main advantage of data caching is the improvement of visualization performance, as well as the reduction of repetitive data requests from data sources. The tile generator, IGlobeDisplayLayers.GenerateTiles, is used to preprocess data both in off-line mode, called full caching, and in an interactive on-demand mode, called on demand data caching. Each data tile will be stored into memory and optionally onto disk for future use. Using data caching improves visualization performance. The ArcGlobe data caching structure is shown in the following diagram: 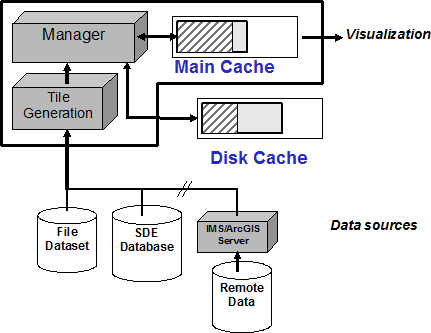 Not the answer you're looking for? Browse other questions tagged arcgis-10.0 3d or ask your own question.