I intend to sit this image(and many more) over a large mosiac.

Using CSMapReprojector this re-projects with a boarder. I've read other discussions about how to clip and set the nodata value but none seem to work.

Can anyone please suggest the right method for this

Example below is something i've tried (also with the RasterNoDataSetter but to no success). I think it has something 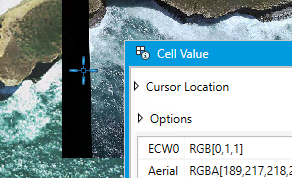 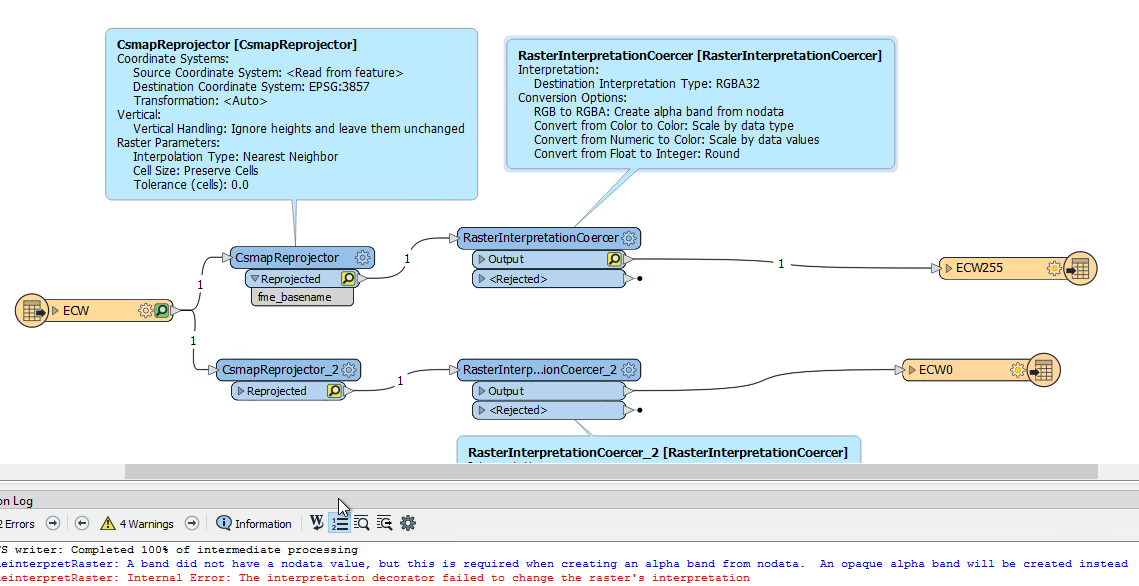 So, let's run through what happens here. Apologies if this is too basic in places, but I like to be thorough.

Consider the boundary of the raster object. It is a rectangle. It has to be. When FME reprojects that raster, what was a rectangular boundary can now be slightly distorted by the reprojection. Because a raster dataset must be rectangular, FME fills in the gaps between the new boundary shape and the smallest rectangular area that fits around it.

This is the black border you are seeing. It can't be clipped or removed, because it would leave a non-rectangular shape. The color is black because the default is 0 (so 0,0,0). I'm not sure how you're getting 0,1,1, but I suspect it's the InterpretationCoercer that you are using, which can rescale values.

Anyway. If you are both reprojecting and mosaicking inside FME, then the simplest solution is to create the mosaic first, then reproject. Then you won't get the black borders in the output.

Another solution is to mosaic the rasters in a set order so that the one with the black border is mosaicked underneath one with the actual data.

But what I think is the most common solution is to make the black borders transparent. One way is to use Nodata. Nodata isn't a separate value, it is simply a marker that this specific raster value signifies "no data" (basically a raster null).

So if you add a RasterBandNodataSetter transformer before the CsmapReprojector, then you can set this Nodata value, and that will be used as the "border". For example, if I set Nodata to 200, then this border will become 200,200,200 (instead of 0,0,0).

Whatever tool you use to mosaic the raster together should recognize that 200,200,200 is Nodata, and render that transparent. So no black (or other coloured) borders.

To solve that I would tweak the data so that you have a free value to use for nodata. Use a RasterCellValueReplacer transformer to replace values equal to 0 to 1. So 0,0,0 becomes 1,1,1. Now you can use 0,0,0 as nodata without interfering with other cell values.

So the workspace would be:

Because the border is now nodata, it should be transparent in any operations and viewers, and your mosaic should not show it as a border.

Incidentally, if your format doesn't support nodata, then you would need instead to make the actual values invisible. For that you would do the same as above, but add an alpha band (RasterBandAdder) and make the border cells have 0 for alpha (RasterExpressionEvaluator where the expression tests A[0]=0 and A1=0 and A[2]=0 and if so sets A[3] to 0 too). But I doubt this would be necessary.

Not the answer you're looking for? Browse other questions tagged raster coordinate-system fme ecw or ask your own question.

9
Remove Collar from ECW File (Orthophoto Mosaic)
2
QGIS reprojecting .ecw file in EPSG:23032
2
How to convert TIF to ECW with FME maintaining a certain value?
5
Reprojecting raster with FME?
3
FME workbench convert Geotiff to ECW
1
Removing black region in published ECW file in GeoServer?
1
How do I avoid altering the data range when writing a NumPy array into a TIF file with rasterio?