While creating inner buffers for polygons on postgres/postgis base- a set of few thousand- I received a strange result. Inner buffer for one of the polygons, that was not supposed to appear from logical point of view, showed up. What is more, it looked like flipped. I've made some more "research" in QGIS and noticed that polygons of certain rotation, with buffer of approx. 65% of one of the edges receive above buffer result. As seen in the picture, when rotated, polygon's buffer won't be generated. I tried regular QGIS tools (buffer) executed on shapefiles not on postgres table. 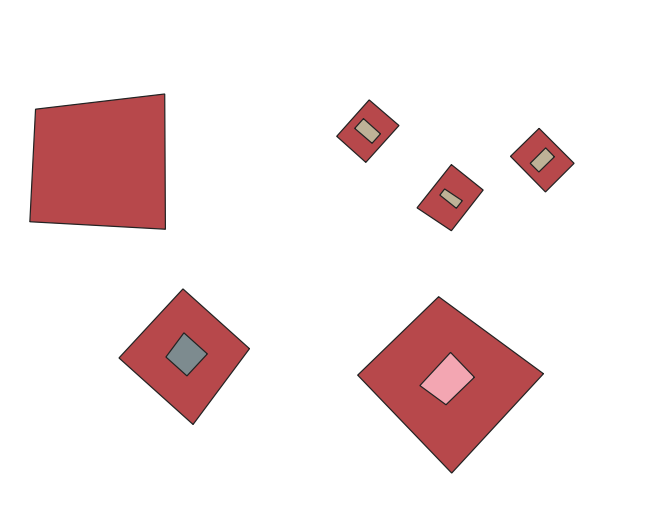 In the screenshot you can see polygons of different size and orientation to the north. All inner buffers are wrong - should not be present. One polygon that hasn't got inner buffer is just rotated copy of the other in the picture. That was enough for the QGIS "buffer" algorithm to work properly, and not generate buffer there.

The source problem is as follows:

It gives me wrong result - I guess

I tried to detect error using st_orientation( to check if these buffers have different vertices flow, they don't). I have also changed direction of base/source polygon vertices but it does't make any difference. Vertices seem to be moved according to buffer size and then used to form polygon. A bit larger or smaller inner buffor works fine. What am I missing?

I've logged a JTS issue for this. At the moment I don't have an idea for a fix.

Can you provide some more polygon data that fails?

UPDATE: this is now fixed in JTS and GEOS.

Not the answer you're looking for? Browse other questions tagged qgis postgis buffer or ask your own question.

0
Summing number of intersections with separate buffer layer using QGIS?
0
How does ArcMap buffer linear features?
1
How to deal with multiple overlaps in PostGIS?
2
How do I create proportionate inner buffers which reduce in size based on a percentage, to a specific point
7
Is there a way to have a 'live' buffer in QGIS
1
Two inner polygons touching and covered by two different outer polygons