Is there an automatic function in QGIS to package all files in a project for transferability?

In my project, I use a lot of geodata from different directories. Now I want to give the QGIS project to a colleague (eg on a CD).

Is it possible to copy the shapes from different directories automatically to one directory?

You're looking for the QConsolidate plugin, which works very well. It will transfer everything to a single directory and rewrite the .QGS project file (an XML file) to point to the new source locations.

QConsolidate is still listed as experimental - you'll have to enable "Show also experimental plugins" in the settings dialog.

However - it works very well. Notes:

I have just tested the three plugins that attempt to do what you ask on a project file with a range of file based formats. Here are the results:

All three plugins handled shapefiles without problem, moved data into the target directory and created a project that referenced the local copies of the datasets.

Of the three, QPackage appeared to work the best. Database connections and web service layers were not tested.

I don't know about a way in QGIS itself, but the project file (.qgs) is just a text file. Therefore a primitive but effective way would be to copy everything manually into one directory, then alter the <datasource></datasource> tags in the .qgs file either using find and replace or a regular expression to point to the new directory.

If you've got a lot of different files/directories, one option would be to automate it in python by searching for each tag in the .qgs file, copying each related file with that name to a directory, and then replacing the .qgs tag with the new directory.

QGIS now (3.14+, possibly from 3.10?) has another option for packaging vector layers - the "Package layers" algorithm in Processing. This doesn't save the whole project as a package, but you can save all the styles together with the layers, which takes you much of the way there. 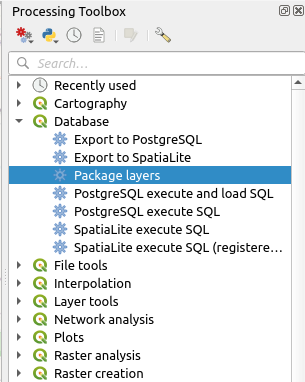 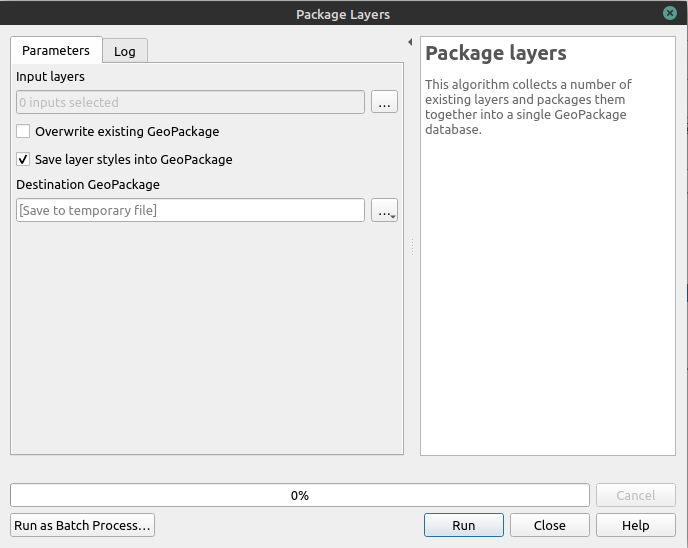 Clicking the 'input layers' options will bring up a list of all the layers in the canvas. 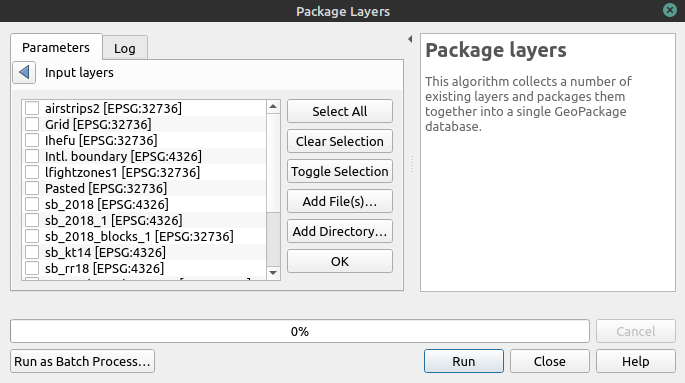 ... then choose a location for the outputs.

There is now also the new relocator plugin. (marked as experimental as well at this moment). Gives you the opportunity to save all layers with the project file into one directory or even in a zip-file.

4
Saving project with layers as one compiled file?
1
Saving all the project layers in one folder in QGIS
0
QGIS - How do I share a project?
1
QGIS Project Packager
6
Storing different shapefiles as "one" in QGIS?
3
Why can't I open projects with QGIS?
2
How to Share a QGIS Project

1
Is it possible to install qgis plugin in a specific non default directory?
4
Why can't I share project files with another QGIS user?
3
Merging all vector files within directory with QGIS?
2
Using shape to find and merge photos in FME?
2
Create PostgreSQL user for QGIS project
11
Is it possible to disable editing for certain layers in a QGIS project?
6
Working with remote QGIS server project files