I combined a set of polygons on the first instance of Geometry generator using something like this:

Buffers are meant to join poligons with a little separation. Thing is, after that I defined marker lines to simulate measurement, but in the case of multipart polygons, I get random measures floating between the different 'islands'. So I want to separate them before measuring, but I dont know how... 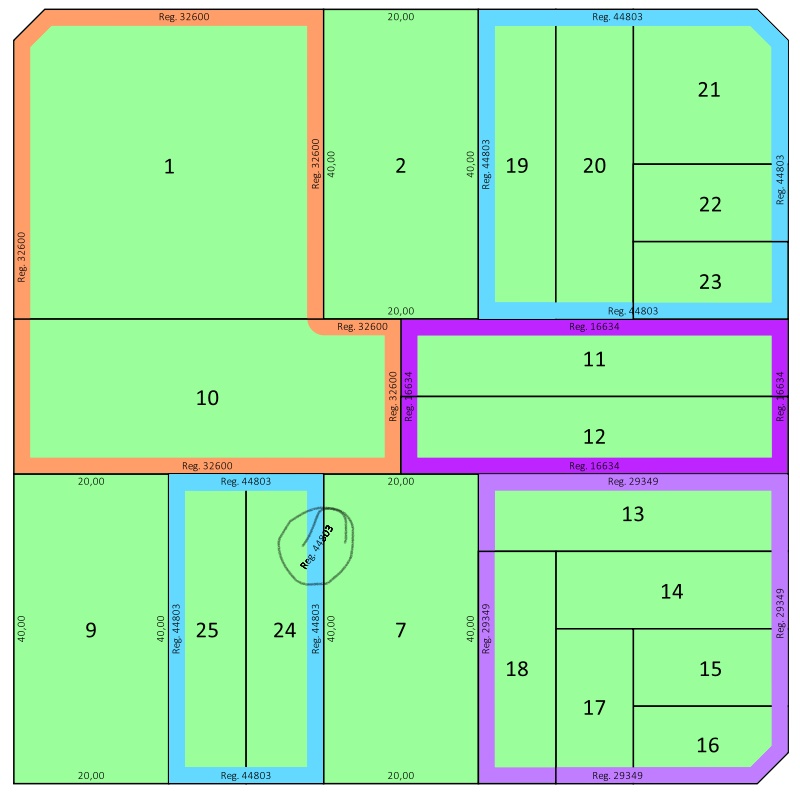 Im using the approach shownin QGIS How to label individual sides of polygon by @she_weeds. My problem is, as shown in the pic, after collecting and buffering, I get some multipolygons and those ones gets an extra text floating between the polygon parts. Is there a way to avoid it without dissolving the generated geometry?

Im not experienced enough to know if its possible (started using QGis 2 weeks ago), but i thought some options:

The main problem I see there is that the collect() function creates a part for each original feature, that is: it returns a 7-parts feature for the collection of plots (parcelas) 19 to 25.

The trick of making a buffer generates a false union of the parts: unites them in an attempt to generate valid geometries, because a feature with parts that partially overlap implies an invalid geometry. I don't think we can trust that after the buffer the geometries will always be merged and valid.

In addition, there are still parts for groups that do not overlap. Which brought you here.

I don't know how to cast single-part geometries dynamically from an expression.

So my proposal is that you create a virtual layer with the single-part geometries, all valid and merged. And that you use that layer to label the sides of the groups.

Since the problem of dumping geometries in a virtual layer is not completely solved I will focus on that problem, seeing that you have already solved how to label it.

You should create a virtual layer with the following SQL query:

I am assuming that the source layer is called plots and that all its features have a unique fid value.

The virtual layer has been saved in the project, it is not a separate file. It has the advantage that any modification in the original layer should be immediately reflected in the virtual layer, each time those changes are saved and the canvas re-freshed / re-rendered.

13
Labeling each individual side of polygon in QGIS
4
Generating chainage nodes and labels along line each 10 meters in QGIS
3
Transferring Z attributes to polygon layer in QGIS 3.10
2
How to Multipart to Singlepart a QGIS virtual-layer?
0
Automatically finding and merging adjacent lines in large data set using QGIS
1
Extract part of multipolygon that does not intersect with another geometry in Spatialite / QGIS DB manager