Is there a way to nest iterators?

I tried created submodels, but that didn't seem to work.

A workspace similar to this: 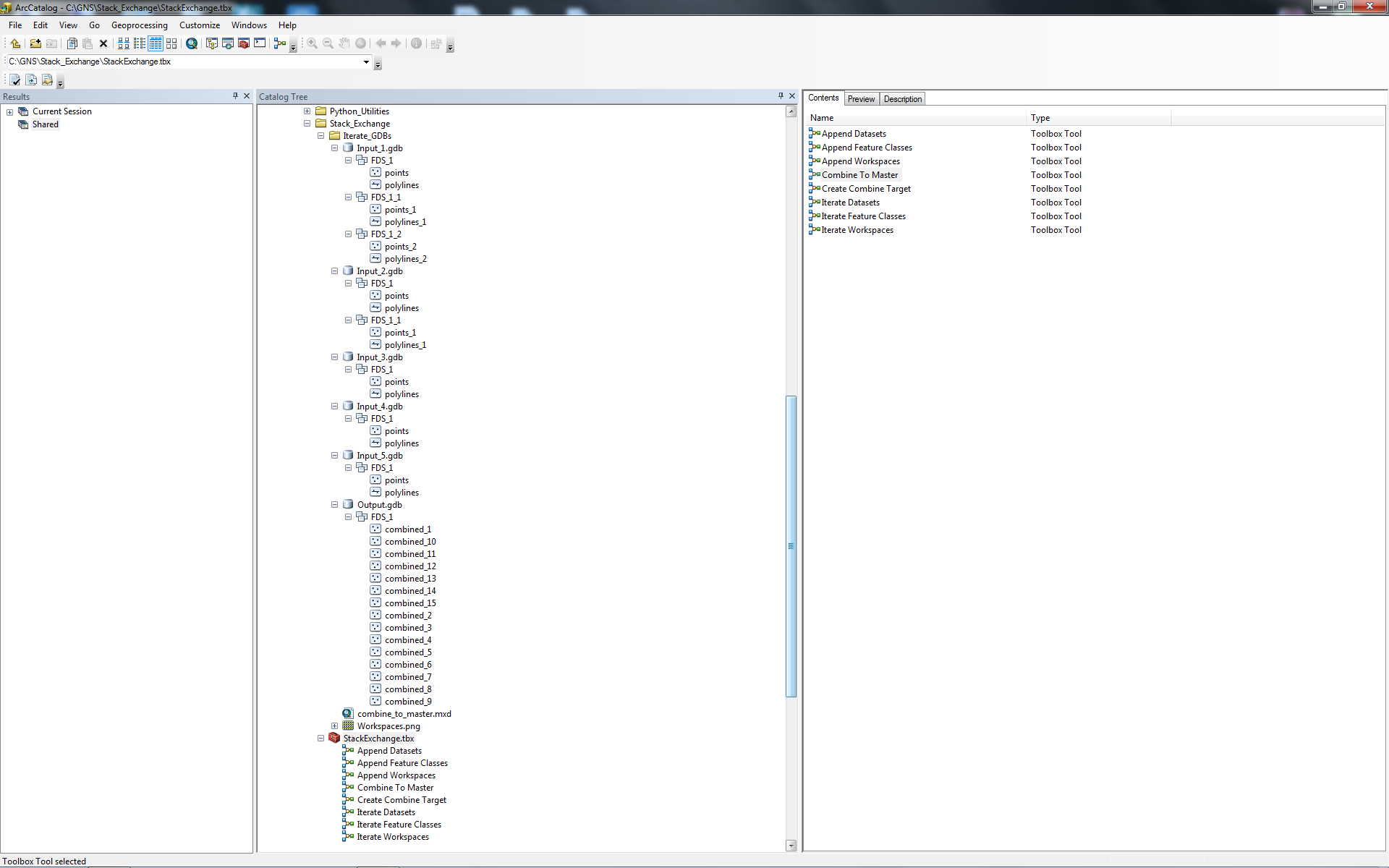 We are going to need 8 Models(seen in the Contents Tab and the StackExchange Toolbox under the Catalog Tree) for this solution:

Combine_To_Master drives the whole process with parameters for: 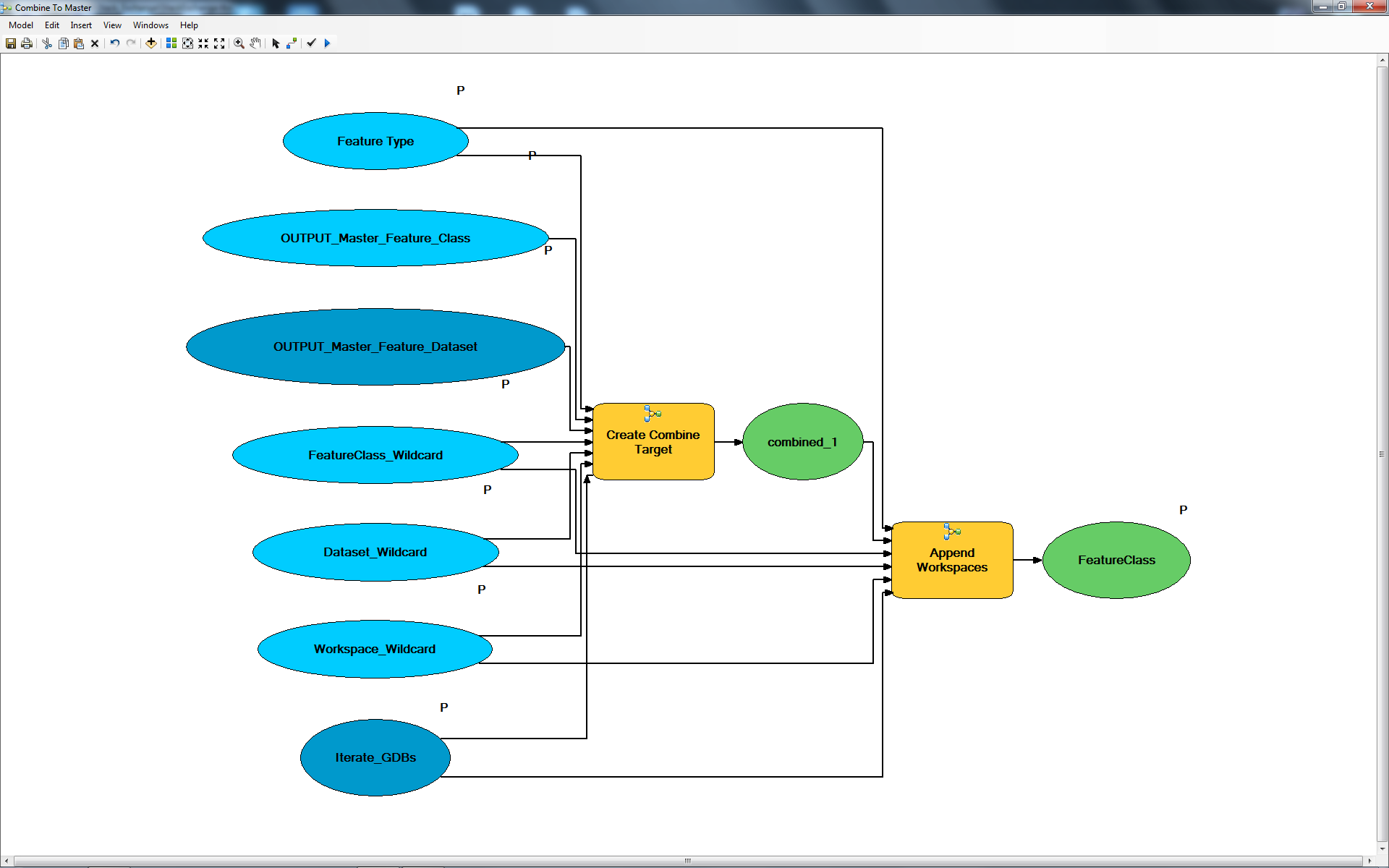 Create_Combine_Target iterates into the workspace to find the first valid Feature Class and uses that Feature Class as a template to create the OUTPUT_Master_Feature_Class schema in the Output_GDB Feature Dataset.

Append_Workspaces iterates over all the filtered workspaces,datasets,and feature classes and appends the valid feature classes to the OUTPUT_Master_Feature_Class created in the previous step. 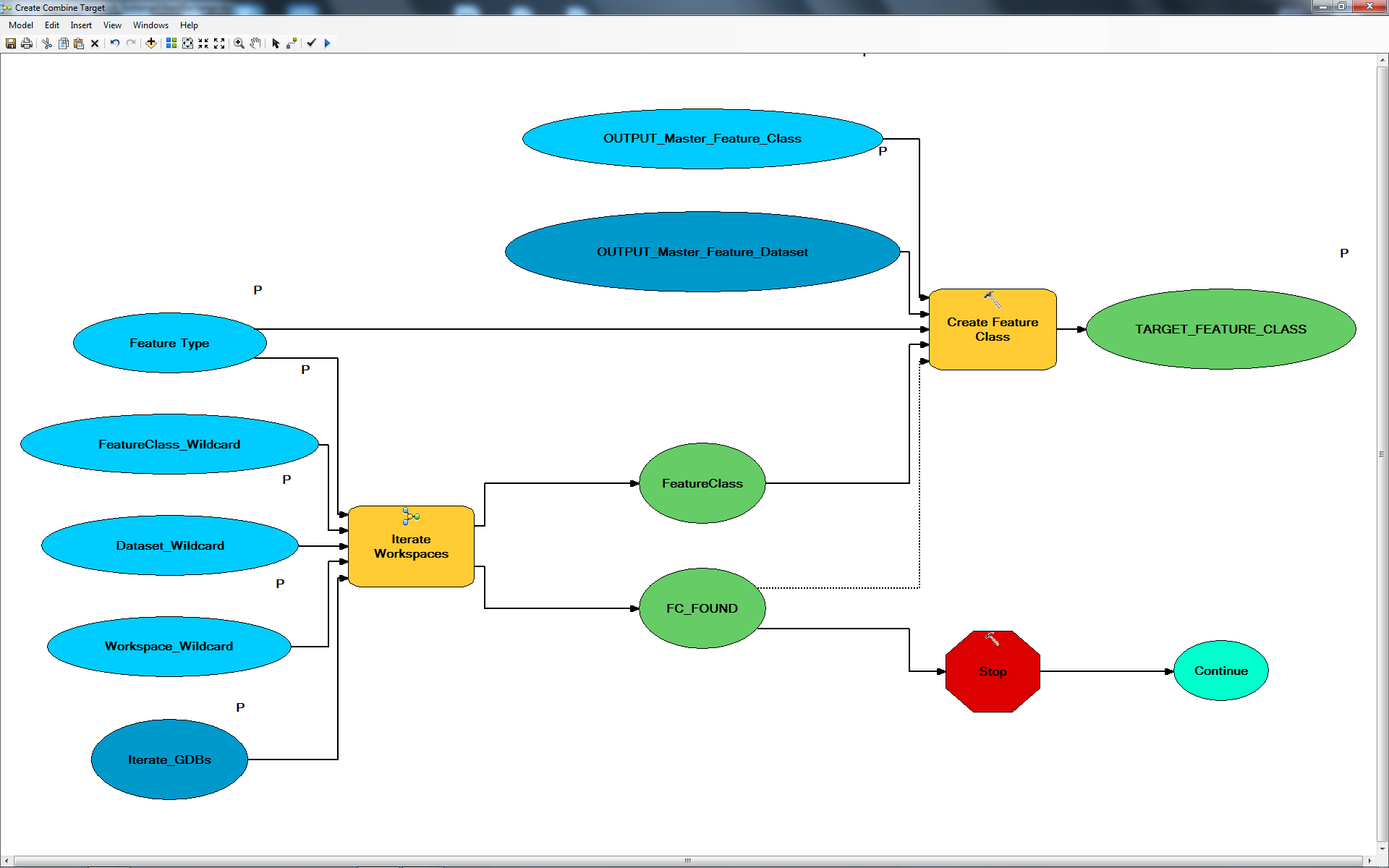 The important part here is that sub-model Iterate_Workspaces will call Iterate_Datasets which will call Iterate_FeatureClasses which will return the first valid feature class AND a boolean, FC_Found, as a pre-condition to the built-in Create_Feature_Class Tool. Additionally, it will set the Stop Flag to avoid unnecessary iteration after the first valid feature class has been found.

If we look at the Iterate_Workspaces model we will start to see how the iterators chain into this process definiton. 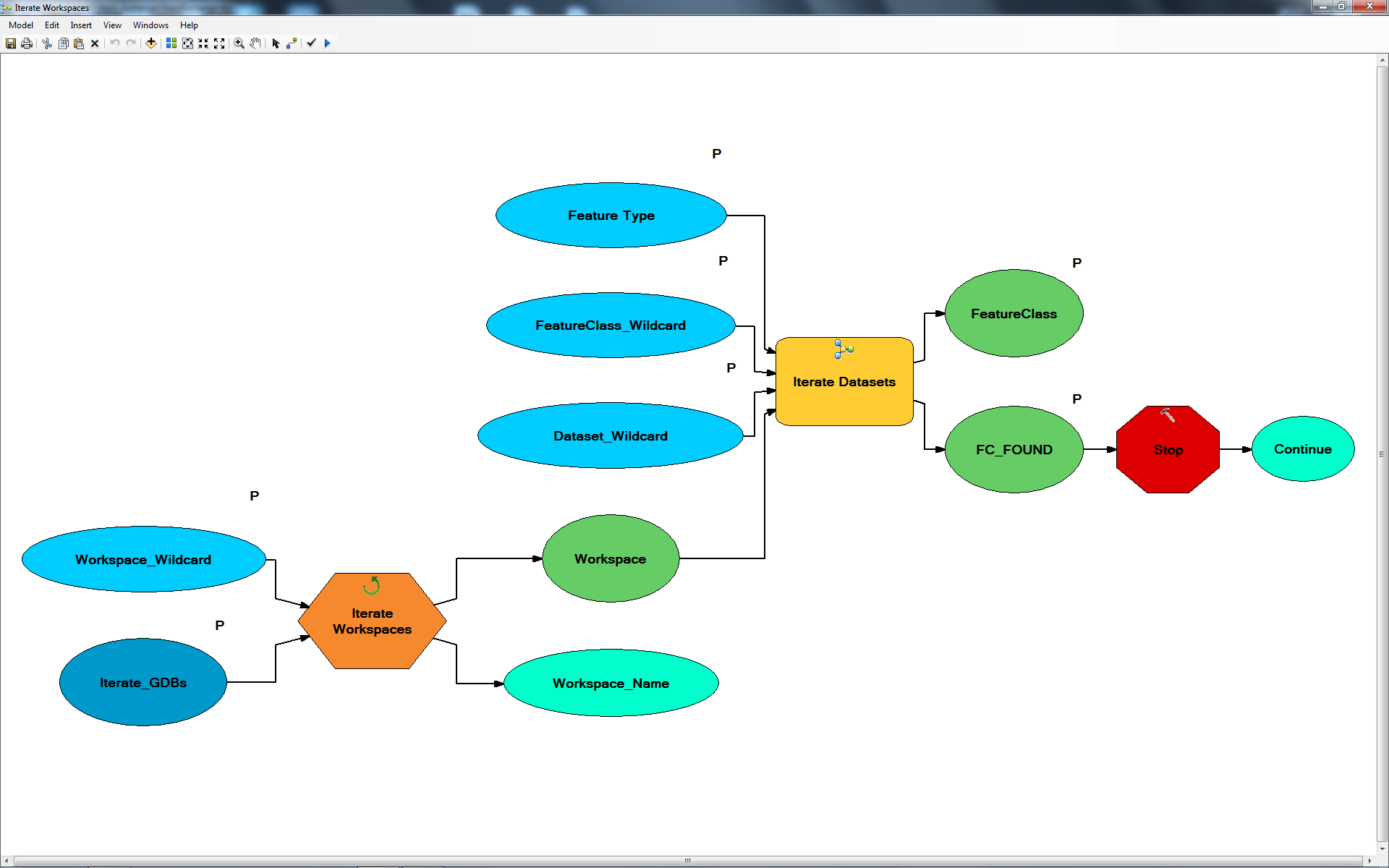 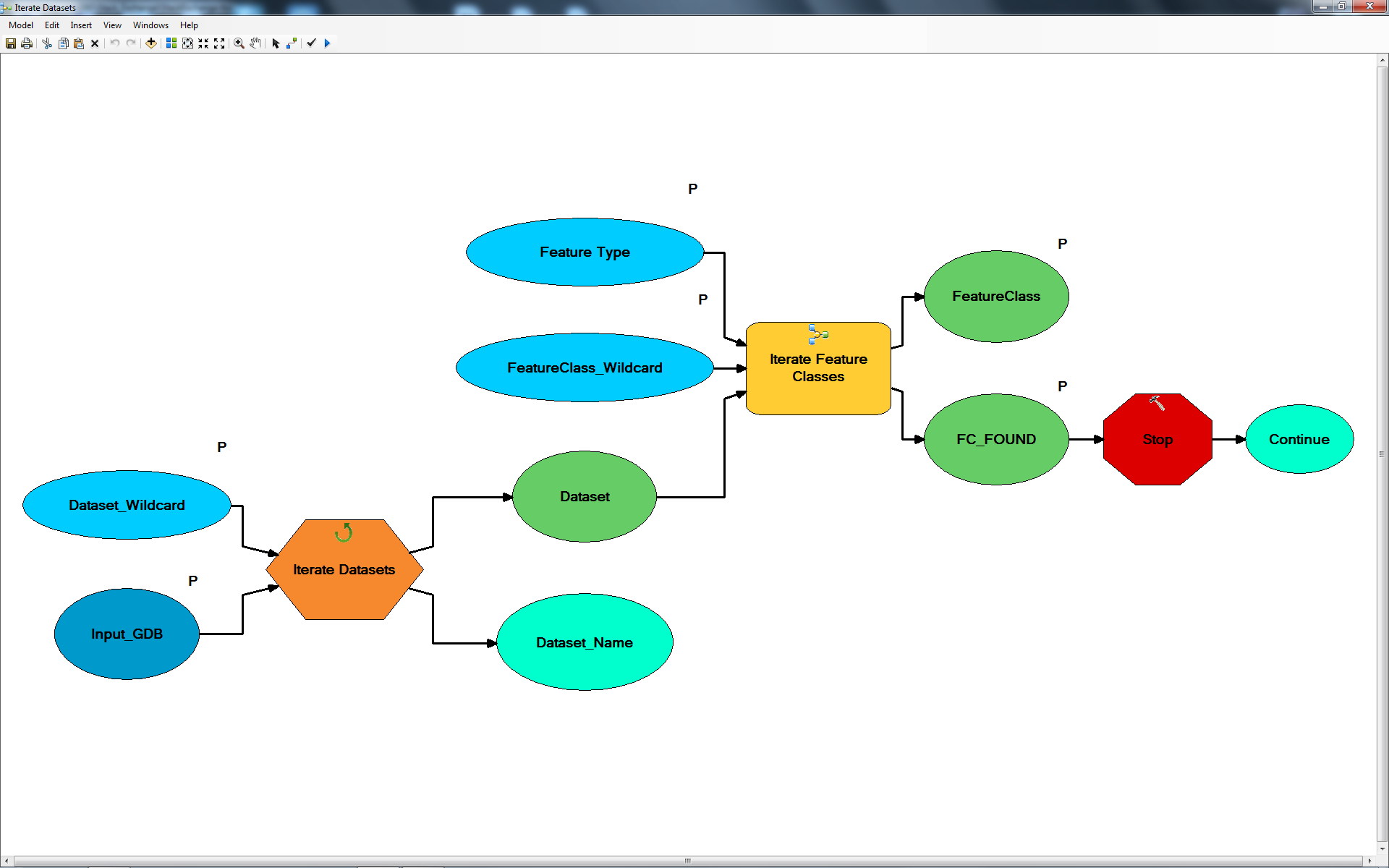 This model is similar to Iterate_Workspaces except it feeds datasets from valid workspaces filtered by Dataset_Wildcard into the Iterate_Feature_Classes sub-model. 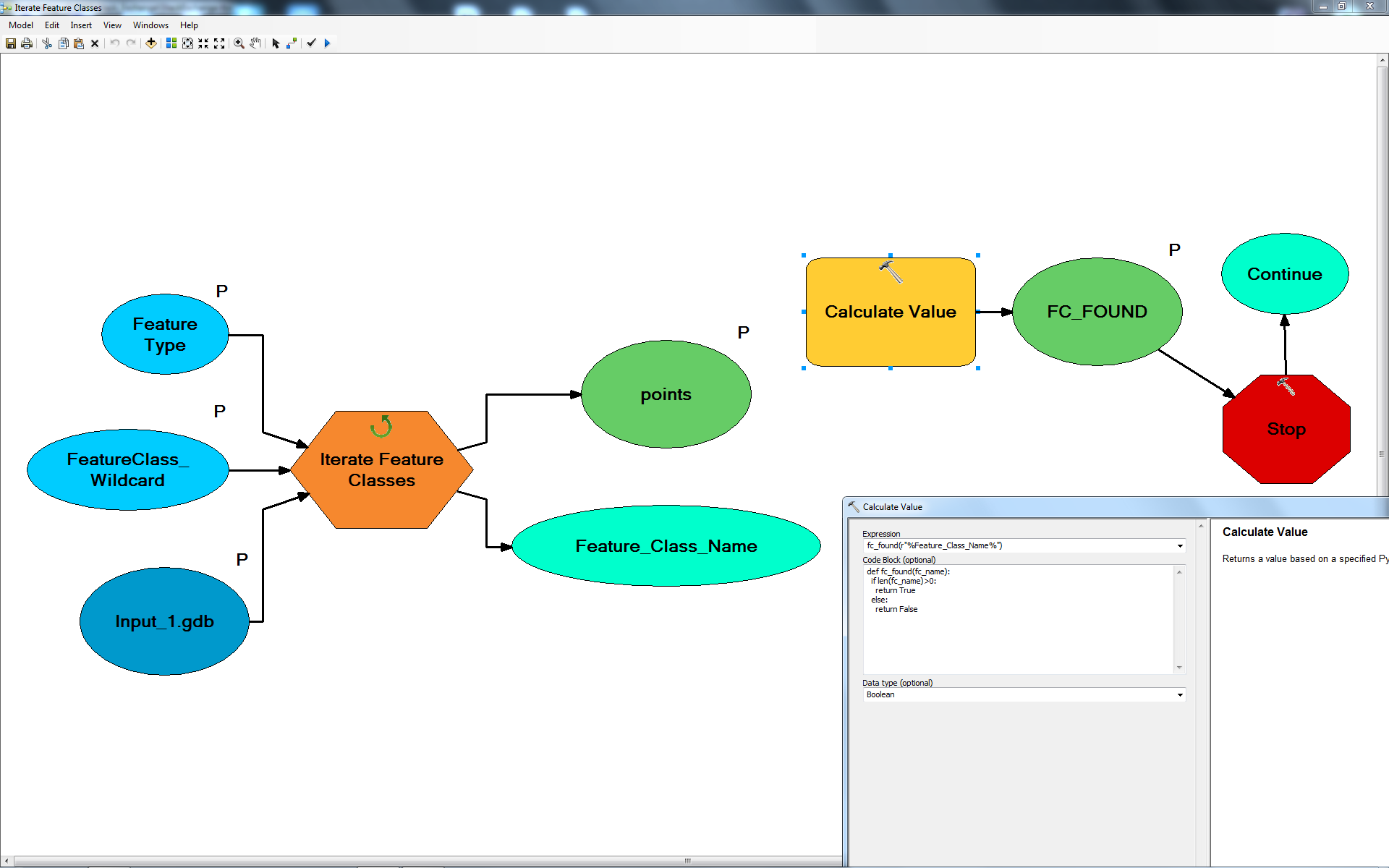 The only unique thing about this model is the Calculate Tool used to insepect the Feature_Class_Name in order to set the Stop Flag once a valid feature class has been found.

The Iterate_Datasets Model will set its Stop Flag and return the feature class, along with FC_Found, to Iterate_Workspaces.

The Iterate_Workspaces Model will set its Stop Flag and return the feature class, along with FC_Found, to Create_Combine_Target.

The Create_Combine_Target Model will set its Stop Flag and pass the feature class to the built-in Create_Feature_Class Tool.

The Combine_To_Master Model will pass the newly created feature class on to Append_Workspaces as the TARGET_DATASET parameter. 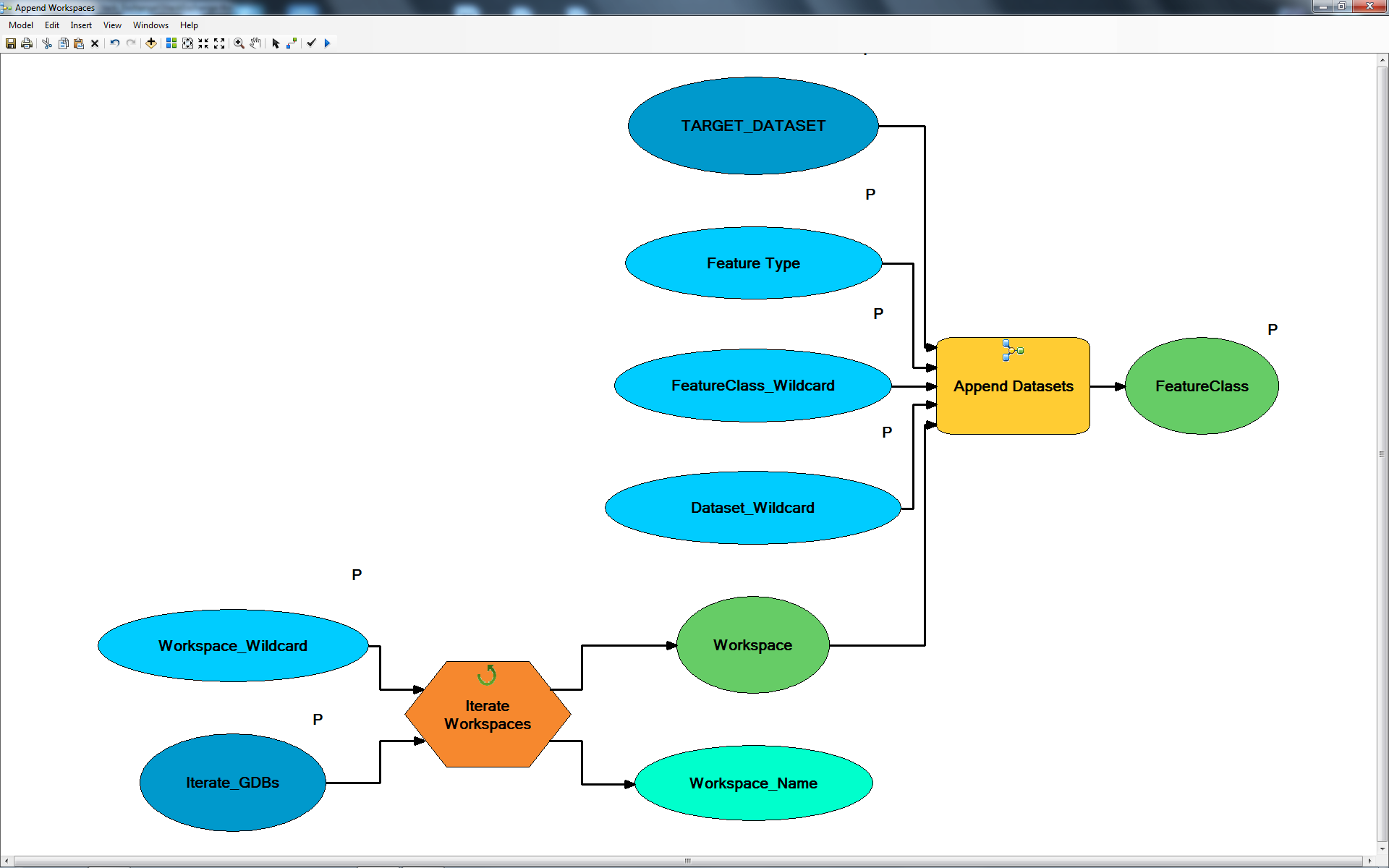 This model sets up a new Workspace iterator to feed workspaces from the Iterate_GDB's folder filtered by the Workspaces_Wildcard into the Append_Datasets sub-model. 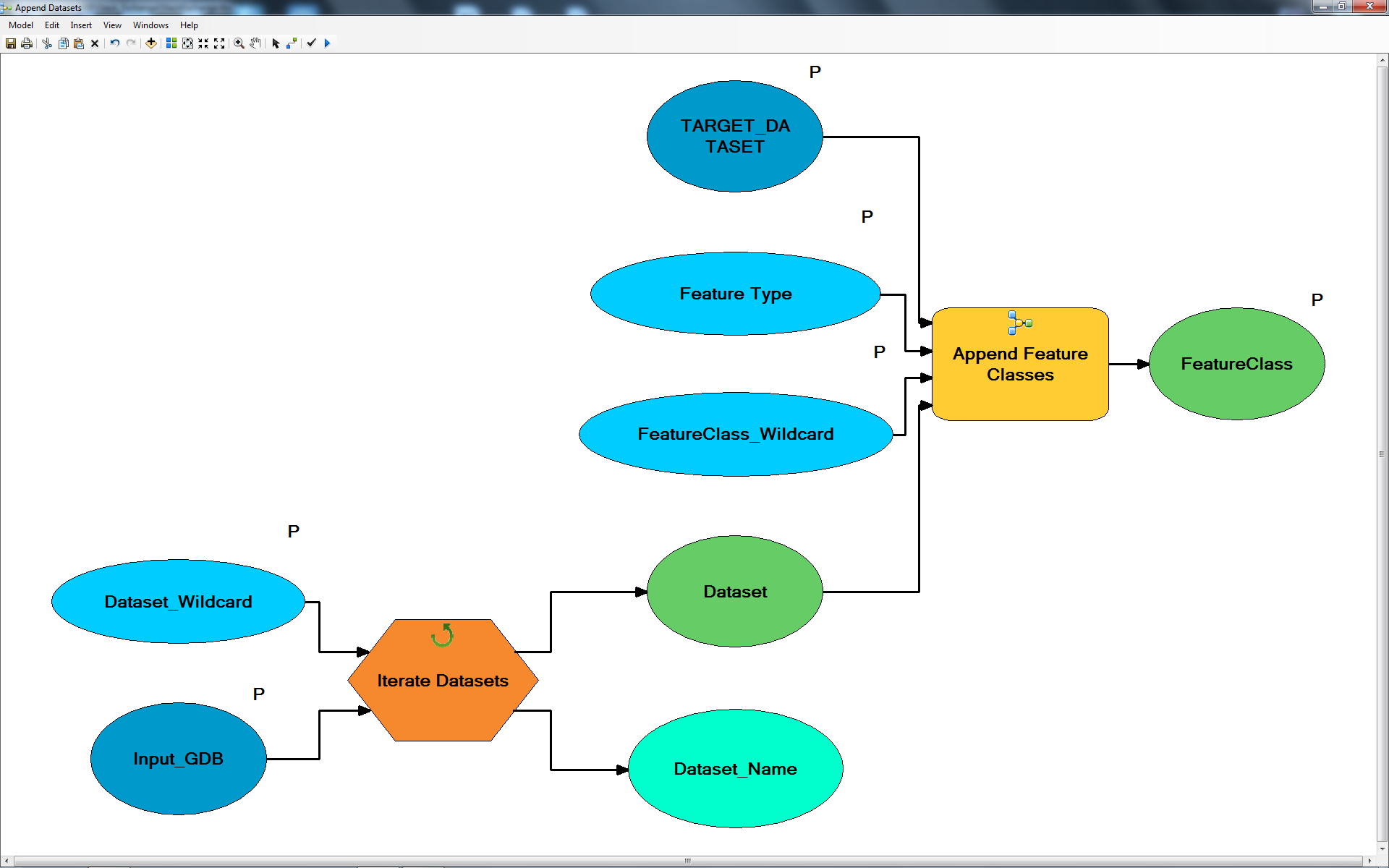 This model is similar to Append_Workspaces except it feeds datasets from valid workspaces filtered by Dataset_Wildcard into the Append_Feature_Classes sub-model. 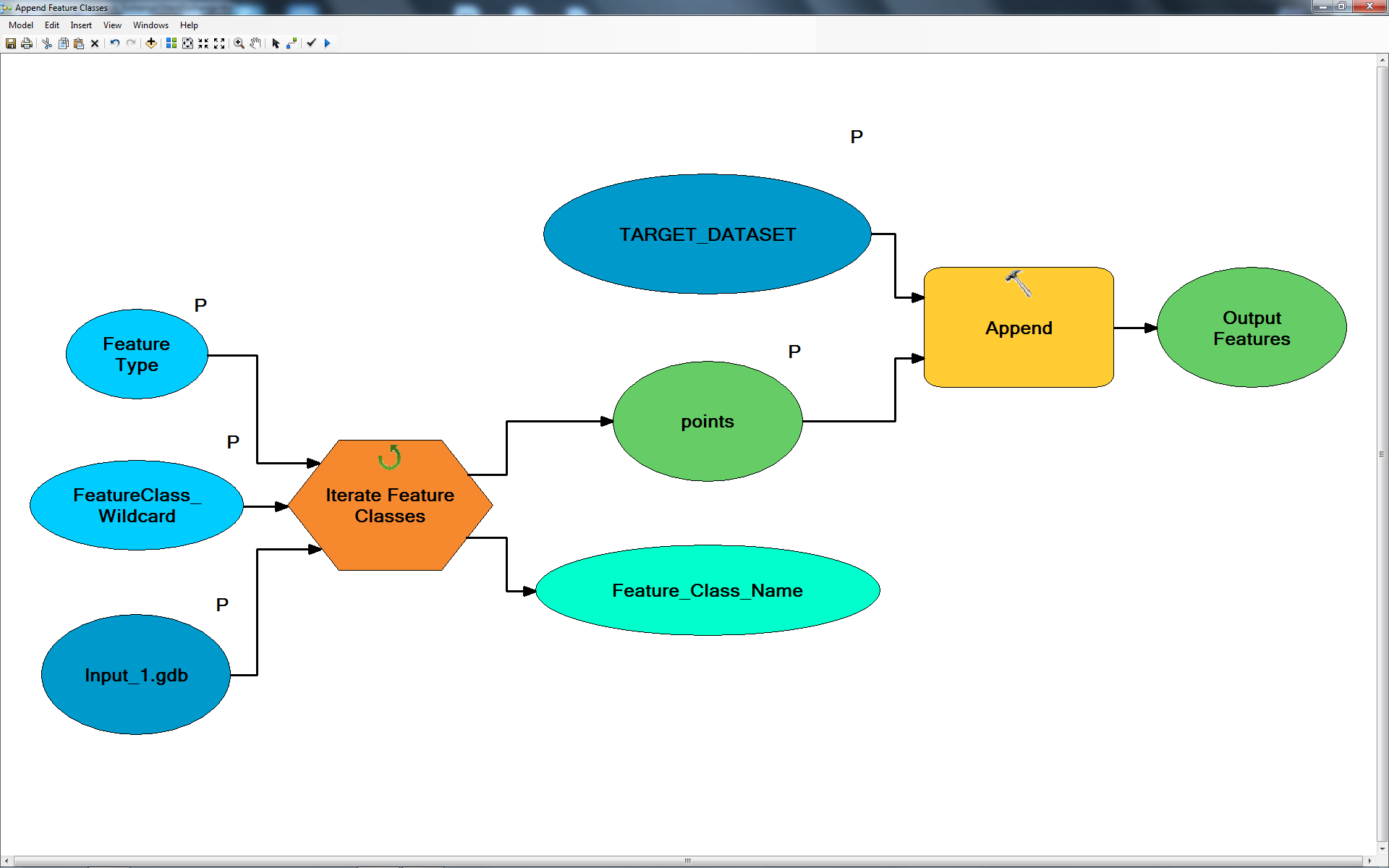 Here's some sample maps that show the input / and output feature classes after execution of the Model. 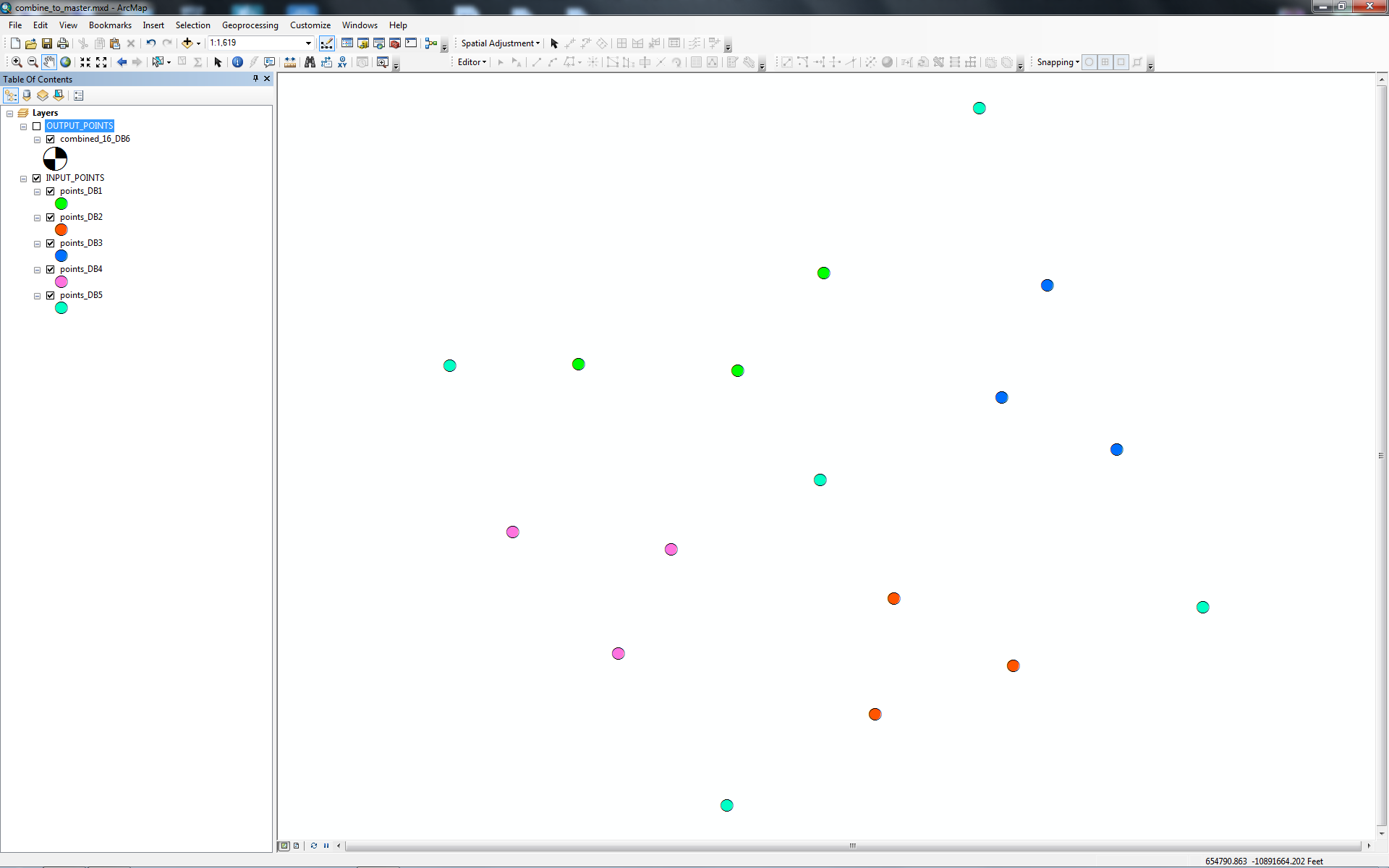 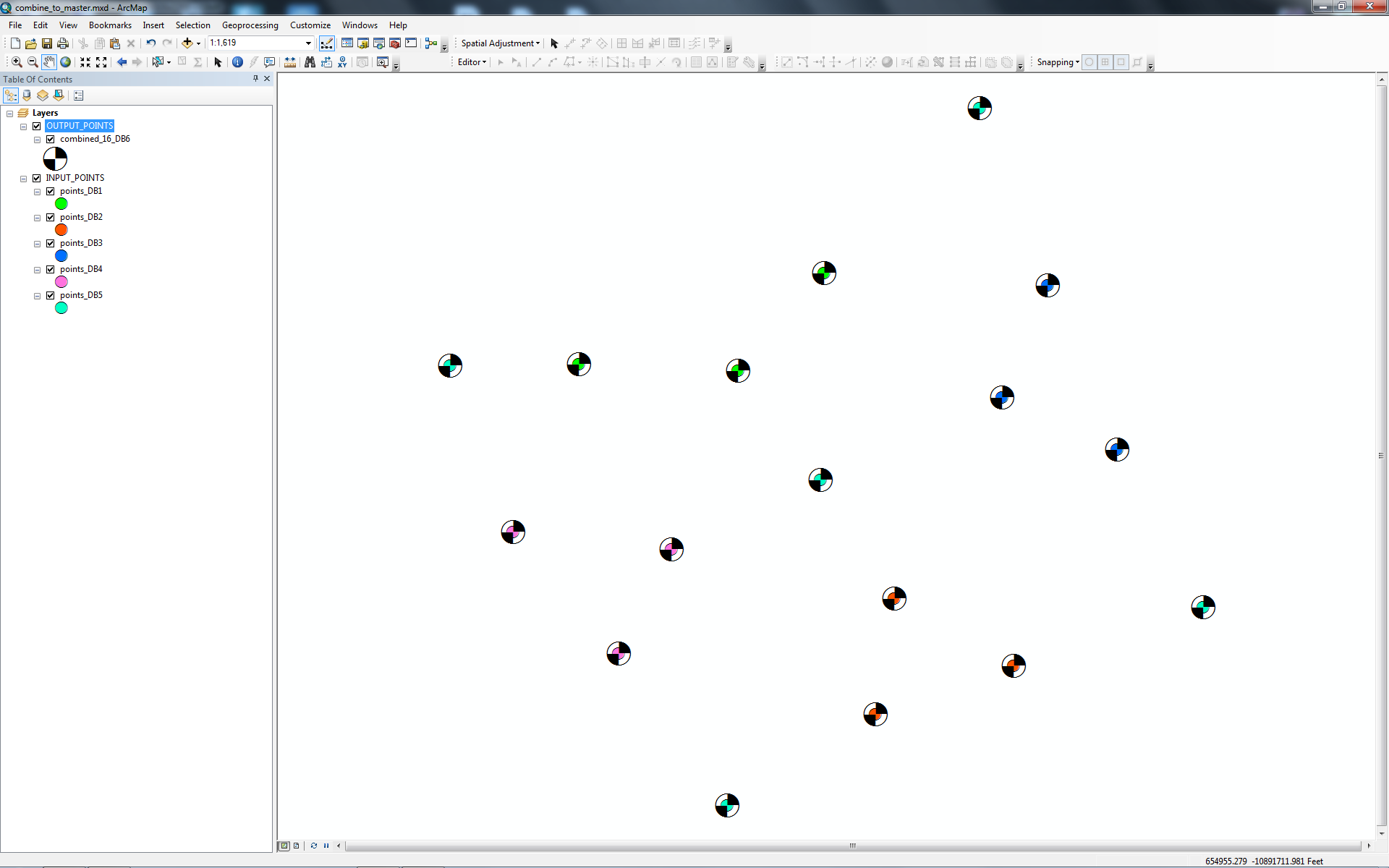 For anyone who is brave enough and still reading this, here are the:

*Future Plans for this tool include, TimeStamping and Source Documenting the features as they are loaded into OUTPUT_Master_Feature_Class. Source Documenting will be spread across 4 columns named SOURCE_PATH, SOURCE_GDB, SOURCE_DATASET, and SOURCE_FEATURE_CLASS to allow for some interesting post-analysis.

Not the answer you're looking for? Browse other questions tagged arcgis-desktop modelbuilder iterator or ask your own question.