With QGIS 3.8 a new Tool has been introduced: Overlap Analysis. It says that it "calculates the area and percentage cover by which features from an input layer are overlapped by features from a selection of overlay layers".

Anyone got any experience with the new tool overlap analysis?

I used the new Overlap Analysis tool today for the first time (QGIS version 3.8.3). Here's how it worked for me.

A layer called output layer, which is a duplicate of the input layer (operating areas), with two new attributes:

Here's what it looks like if I reverse the input layers. Input parameters:

The output layer is a duplicate of the input layer, but this time it doesn't have any additional attribute table columns. 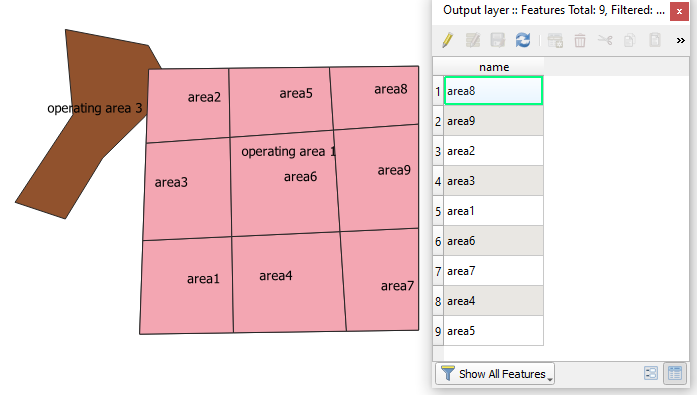 Summary: This tool does not seem to work as intended (yet).

You may need to revert to the old standard method of calculating area of overlap:

Not the answer you're looking for? Browse other questions tagged qgis overlapping-features intersect or ask your own question.

1
Why does QGIS only intersect one part of the layer?
2
Calculate overlay area - QGIS (Essen)
3
Removing Intersection of Buffers in Same Layers
3
Match up two polygon layers in QGIS
3
Which buildings have access to nature where more than 50% of the nature area is closer than 3km?
5
Merge and Delete with priority overlapping polygons QGIS