Is there a name for a coordinate system that measures angles with respect to the y-axis, angle increasing clockwise?

I’m writing some code documentation discussing vector averaging and converting between polar/Cartesian representation of a vector.

If you do really mean that the 0-degree axis points North, the 90-degree axis points East and the Z-axis points vertically up, then is called a Left-Handed Coordinate System. Strictly speaking, however, you really have to be willing to relabel your "X" and "Y" axes the other way around, where "X" is North and "Y" is East.

In this image, from wiki/Right-hand_rule, the left side represents a LH system, but with x-as-north and y-as-east. 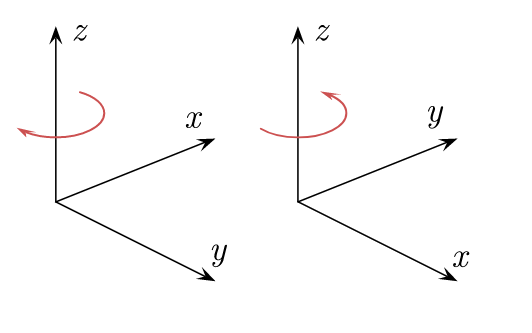 If you're unwilling to relabel that's OK. I was in a situation of developing land survey software using the North American surveyors' convention of coordinate order: North, East, Elevation. While this exactly agrees with the mathematical left-hand system described above, my predecessor programmer was using Y-as-north and X-as-east order. I simply kept that same order/naming internally and the North-first, East-second order externally.

12
Why some coordinate systems define x-axis as northings and some as easting?