Tally of sequences of points within point-specific buffer, rolling over timestamps, in PostGIS?

Note: each point has an individual id to it, and its geom is in UTM (hence the 20 for 20 meter buffer).

Here's an image of a string of 20m buffers around each point in the string: 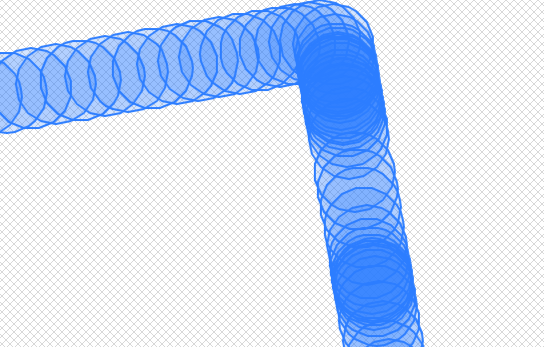 This image shows buffers around points which are on a map, ordered via timestamp. As you can see the buffers are heavily overlapping in some areas (see the dark blue spots). I'd like to count how many points occur in those areas where there is almost total overlap (i.e. dark blue spots). Those dark blue spots represent times where the individual (i.e. thing triggering GPS fixes) is not moving as much, because over time the individual remains within a point's buffer for a certain time window. I'd like to count how many times the individual stays within a given point's buffer for more than, say, X timestamps after the original point's timestamp. Or another way, how many times do we see point buffers overlapping entirely for at least X timestamps in a row.

Ideally, every point would have a code which states whether it is within a "resting" period or not, as in if you find some X points after an original point which are all within a buffer, all of those points would get a "1" because the individual was still from point A for X more points. Points where there is no resting, i.e. no buffer overlaps for more than X points, would get a "0", which means they are not resting at that timestamp.

I think it should looks like this (buffer of 200):

But your problem looks like a clustering problem, so maybe you should take a look to the ST_ClusterDBScan function ? It depends of what you really want.

5
How do I select points within a specified distance of a polygon's border?
5
Calculating area of intersecting polygons within severals overlapping buffers
2
3D Points within 3D Polygon in PostGIS
1
Measuring/4D relation querying within linestring using PostGIS
3
How to estimate time spent within a location using GPS/timestamp data in PostGIS?
2
Group geometry points and create a linestring for each group
6
Snap points to the nearest location on a polygon
2
Points of tracklog inside a polygon with a re-enter tolerance