I have been struggling with how to redistrict in ArcGIS Desktop so can anyone put me through the necessary steps, data, extensions, to perform this operation.

More so, is there any Open Source GIS that can perform this task?

ESRI offers two products to support redistricting (as in drawing boundaries for election districts). The web-based product is described here. There's also an add-on version that is described here. As best as I can tell, the add-on is free and will work on versions 9.0 forward. Documentation and a tutorial are here. This add-on appears to be designed to help create district maps in the US, as one of the key inputs is population data. I have no idea how useful this add-on would be in another country.

I have only limited exposure to redistricting, but it is a complex process in that there are many overlapping and conflicting goals in designing districts, depending on the designer's objectives. Thus, Democrats create different district maps from Republicans.

Azavea has released a web-based, open source software for collaborative redistricting called DistrictBuilder. You might want to try it out.

As for learning about redistricting, you might want to read A Citizen's Guide to Redistricting. 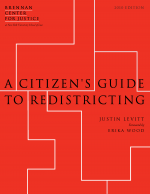 Not the answer you're looking for? Browse other questions tagged arcgis-desktop arcgis-9.3 open-source-gis redistricting or ask your own question.