Is it possible to use a Gaussian kernel over a polygon layer?

I just started to work in QGIS and I'm new to GIS in general. I have a polygon layer map with some attributes assigned to the polygons. I also have a point layer with some cities that lie over the polygons. I think it should be straightforward to assign each point/city to one of the polygons (I have not done it yet but people told me that it is possible).

I would like to go one step further: is it possible to calculate an average of the polygon surrounding the point attributes?

The average could be done with something like a Gaussian kernel.

I insert an image to clarify: 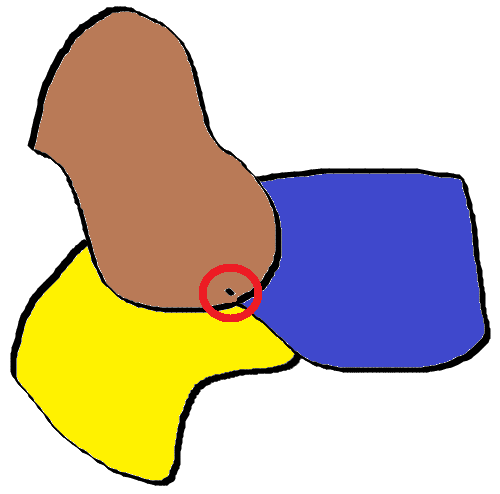 What I would like to do is to average the three colored polygon values based on the red circle around the black dot I draw (the red circle could be the width of the Gaussian kernel). In this way the value I should obtain is a mix of the attributes and reflects the fact that this city lies close to the border of the polygon.

In normal image processing this task could be considered as applying a Gaussian kernel to an image and then select the attribute value in the pixel location where the city lies.

Is rasterization a good option?

I think I found the solution, however Erik made a useful comment that I should consider. Everything with Qgis tools.

Then I should smooth the layer using SAGA: QGIS Raster map, smoothing pixels

Not the answer you're looking for? Browse other questions tagged qgis polygon rasterization or ask your own question.

1
Highlighting and exporting raster layer based on vector polygon
0
Associate points with polygon QGIS 2.2
4
Determining which polygon(s) each point lies in using QGIS?
2
Is there a way to assign a feature from the majority of points to a polygon with *join attribute by location* QGIS 2.18
2
Calculating polygon area inside another polygon in QGIS
6
Rasterize/Filter with Burn and Weight variables in QGIS
3
QGIS: Select polygons from one layer which intersect/lie inside polygon from other layer?