I would like to take this archaeological drawing and use QGIS to create a something similar to a DEM or TIN, so that depth/elevation values can be quickly and clearly understood.

I do not know what would be an appropriate workflow to accomplish this. Although lines do represent different depths, they are not regularly spaced like a topographic map. Additionally, there are some areas of the drawing which indicate different depths within the same feature (in the southern wall trench depths of 34, 29, 20, and 23cm are shown together).

At this point, georeferencing is not required, but the ability to do so in the future is one of the reasons I would prefer to use QGIS over other software alternatives. What recommendations do you have for converting this drawing into a DEM or TIN?

Here's an example of the type of drawing I'm working from. 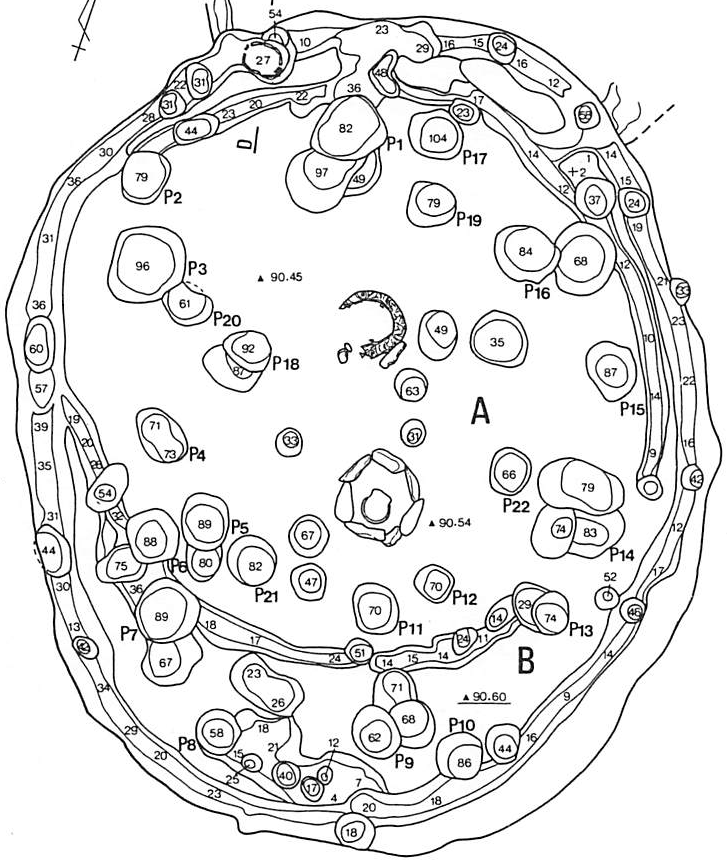 According to my interpretation of the drawing, the lines are what are called structural lines, in the terminology of an interpolation.

I am particularly interested in understanding in the best possible way how the restriction of structural lines is applied in the interpolation algorithms of QGIS.

If you could digitize some representative lines and points of known level, for at least some sectors, and share those layers in a geopackage file, avoiding us having to interpret the meaning of the different numbers and nomenclatures that are currently present in the drawing, I would be delighted to strive to investigate the application of structural lines to QGIS interpolation algorithms, try to build a DEM that represents the topographic condition of that terrain in the best way I could, and share the procedure used.

Not the answer you're looking for? Browse other questions tagged qgis dem elevation contour tin or ask your own question.

35
Creating DEM from contours in QGIS?