What's role of WFS-T in webapp?

I have more experience in "traditional" (Java EE) webapp development, and I am trying to figure out a decent design for a mapping web application.

My application has a map, and users can see and edit some features on the map. Let's say they can add and modify simple rectangular areas on the map, and edit some data fields for each area. Map will most likely be implemented using OpenLayers.

I will have a relational database that will store non-map-related data. Let's say the area on the map is a "school district" with direct fields such as "number of students". Then there's another page where you can input information about teachers for that area. How do these options compare?:

A. WFS-T is not used. All the data is stored in the traditional relational DB. When user uses the map, the base map images are read from the map server but the data about the user editable features is read from the DB. I read the coordinates for each area from my backend and draw the areas using OpenLayers tools for drawing e.g. vectors on the map. All my modifiable data (map-related or otherwise) is in the same relational DB.

B. Use WFS-T for storing feature data. When user uses the map, both the base map images and the editable areas are read from the map server. Now it becomes a question about where to draw the line between the mapserver/WFS-T and the traditional relational db. All the data is not suitable for storing in the map server. The "school district" data may be linked to a complex graph of tables which need to be e.g. reported on. Should I store just the geometry data (coordinates of the areas) in mapserver/WFS-T and everything else in traditional db tables? Or should the immediate data about school districts be stored in mapserver/WFS-T and rest in traditional db tables? How do these two combine? Or, can mapsers/WFS-T utilise the same tables/schema as the traditional side of the application...?

EDIT: adding an image to hopefully illustrate what I am talking about 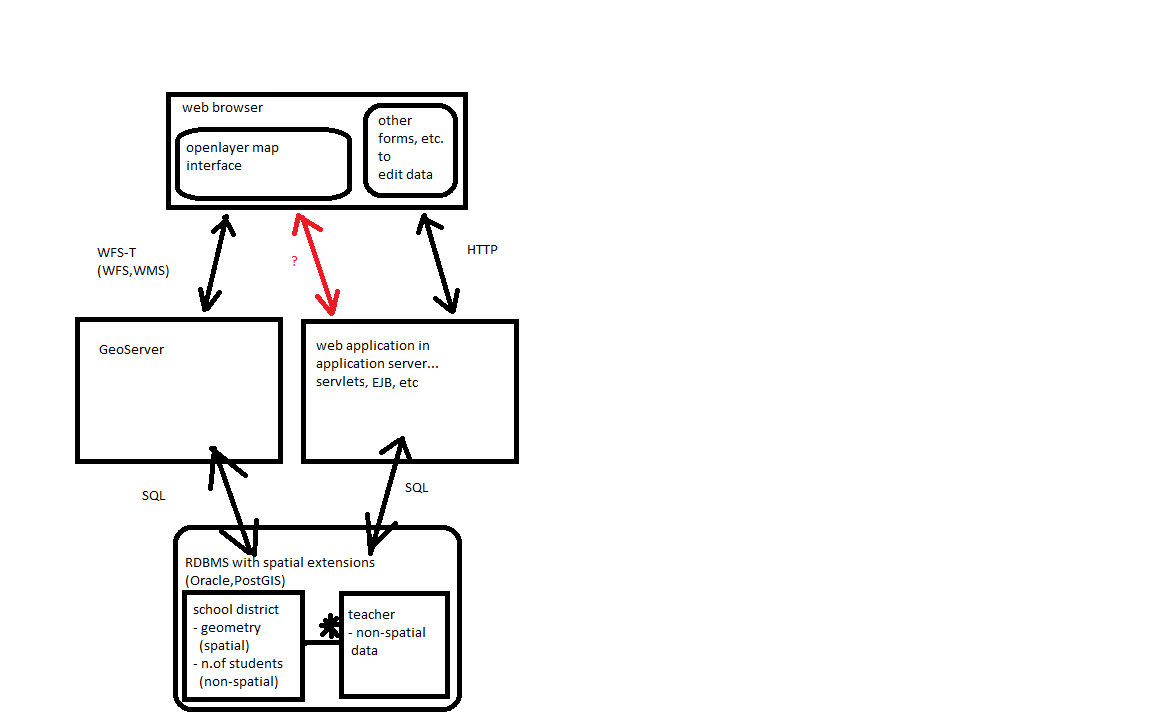 We have a web application that has both

Both spatial and non-spatial data can reside in the same RDBMS.

What I am still unsure of is:

You do not use it to store the data. It is not a database. You might want to consider PostGIS though. It is a spatial extension to Postgresql. That way, you can store spatial and non-spatial data in one place. 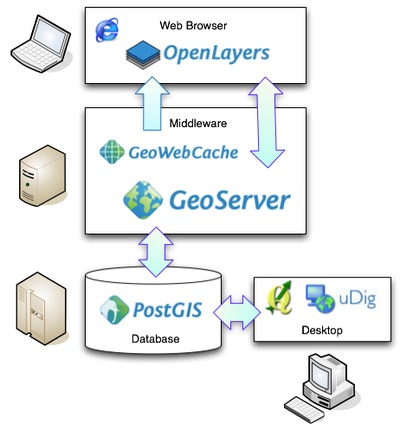 What data should be updated using WFS-T? Is it just the pure geometry (shapes of "school districts") or also data directly associated with the geometries ("school district's number of students -property)? Or can we use WFS-T for all updates, also non-spatial data ("teacher" data - although this does not sound nice)

You can edit the geometries and the associated data using WFS-T. As for the nonspatial data without associated geometries, I think it's best to use other methods for that. Handle them like you would on a normal web app.

If the stored geometries are simple (points in the map, or rectangular areas), is it smart to involve WFS-T and it's added complexity, or would it be sensible alternative to persist those geometries using the right side of the diagram? You would just have simple X1,Y1,X2,Y2 fields in a non-spatial table "school district", and handle storing that data in your regular web application just like you store all other data.

As for the points, that would depend on what your app does. If it's primarily for visualization then I guess it's okay to just store them as x,y pairs. if you would like to do spatial analysis however, like queries, buffers etc then it would be preferable to store them on a spatial database and use a map server and WFS-T.

GIS generally talks about what and where?. Yes both are data in general.

Its better to store the data (spatial and non spatial) in the same table (called as postgis layer) in a postgis db( dataset).

Not the answer you're looking for? Browse other questions tagged geoserver web-mapping editing openlayers-2 wfs-t or ask your own question.

5
How do I set attributes when creating vectors using OpenLayers and WFS-T?
4
Java client for WFS-T?
3
Implementing access control for WFS-T updates?
1
GeoServer, OpenLayers and updatable views: unable to edit data of WFS-T feature layer
3
How save modified features in server side with java and geotools?
3
How to set up wfs-t service in Geoserver using openlayers from postgis data?