I have a polyline layer and a points layer with features that are nearby the polylines. For the latter I want to find the closest points on the polylines (as existing vertices or new-created vertices along the polylines).

My initial approach is to loop through all polylines and check if their bounding boxes with a bit of buffer are intersecting the given points, so 2 for-loops then for each polyline candidate to loop through vertices and apply the distance point-line algorithm to find the closest point. But can become very slow especially for large datasets.

I've quickly checked Quadtrees but I see they are optimized for storing and fast lookup of point features. Is there anything similar for polylines or rectangles (bounding boxes)?

Later edit: I'm more interested in the algorithm / ways to store data because it's part of the software that I am implementing at this moment. So any existing GIS software / plugins examples are ok but I want to see what's "under the hood".

Welcome to the site. The question is a bit vague, but if you are using ArcGIS, you will most likely want to use proximity analysis (https://desktop.arcgis.com/en/arcmap/10.3/analyze/commonly-used-tools/proximity-analysis.htm).

This chart shows the different combinations of geometry for these operations with the one you described circled in yellow. (https://pro.arcgis.com/en/pro-app/tool-reference/analysis/how-near-analysis-works.htm) 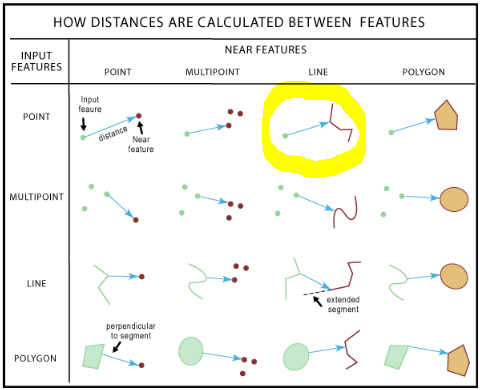 In QGIS, there is a plugin called "NNjoin" that does something similar (https://plugins.qgis.org/plugins/NNJoin/)

Once you have the distances for all of your points, you can filter them accordingly.

Not the answer you're looking for? Browse other questions tagged algorithm quadtree or ask your own question.

14
Performing dikes extraction from DEM?
22
Algorithm to find out points of inflection for a polyline
10
Algorithm: move a source polyline to a reference polyline (completely or maybe partially)
6
What is the algorithm used by ESRI for finding loops in a geometric network?
5
Similarity between two raster maps
3
How to incrementally add points to a polygon and eventually increasing the size of the polygon in postgis?