What is this "brown spot" in Google maps?

I was in Google maps today and noticed near Baltimore, US where the river is, there's a huge brown spot. Is this due to all of the waste? If so, will this keep going all the way into the ocean? 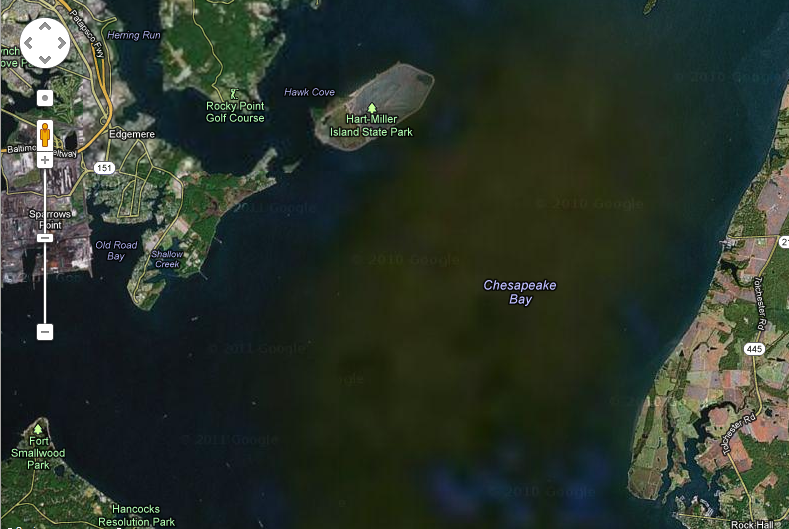 Could be a cloud.

Google try to filter these out, but not too well in this case.

Have not found any links to back this up, but I do remember reading about it on a post that was looking at the possibility of rendering a 3D real-time cloud layer.

According to this article, looks like something similar to this has happened before and Google claimed it to be a imagery processing mistake.

This is just a guess because I don't really know 100% but it looks like a strange cloud to me. If you zoom past it, it seems to go away. There also seems to be no user photos or wiki articles on it.

But of course I could be wrong and would love to really know what it is.

Let's see, it appears that this image was taken from a satellite, rather than the Aerial Orthophotos that show up closer to the shore when you zoom in. Notice also that there is a brighter blue spot just South of the brown area and North of Love Point. This would suggest that the brown area is not related to the depth of the water. Also note that, just South of the island which Love Point is on, Google starts displaying bathymetry instead of an image. So, as far as an answer, I don't have one (sidenote, aerial photo interpretters almost never give definite answers). But I am intrigued by the fact that this blotch only shows up a distance from the shoreline. If it wasn't for the lighter blue to the South, I would be inclined to say that the increased water depth makes some pollutants more visible.

It looks like an algal bloom to me. The blotchy and diffuse characteristics do not fit a cloud. Algal blooms are not uncommon in the Chesapeake due to the amount of nutrient loading the watershed experiences from agricultural upstream.

But it appears to be only over the water - that would be a very stranged shape cloud given the outline of the coast in that area. And over to the east in Delaware Bay, there looks like another area cut off by a sharp boundary with the blue area.

Is that area tidal? Could it be a difference in tide when the photo was taken? Or maybe sunlight reflecting off water getting processed in a strange way?

Not the answer you're looking for? Browse other questions tagged google-maps imagery classification or ask your own question.

4
Google earth Borders on Google maps
4
From pdf to google maps overlay
3
Why does my WMS layer overlap the Google Maps v3 logo?
3
OpenLayers - Vector Layer and Google Maps - vector layer and google layers don't seem to be in sync when zooming on Chrome
5
Examples of Google styled Maps? (including JSON)
1
What causes rainbow image artifact in Google Maps satellite imagery?
6
How do I combine layers in Google Maps?
1
What's this rooftop texture found in Google Maps imagery - is it an artifact?