How to start from scanned maps in qgis

What I have: A large TIFF covering parts of several contiguous sheets of the British OS 6 inch first edition. It has no georeferencing. It's just a series of scans which someone has stitched together (actually gdal_transform extracted it from a larger .ecw)

A number of scans of original sheets. These are also plain scans with no georeferencing but they do have latitudes & longtitudes along the borders so I can read off the corner coordinates in DMS.

I assume that the projection of all this data will be close to if not identical to the current OS projection.

What I want to achieve: The large TIFF properly georeferenced so it can be used as a basis for georeferencing various tithe maps.

How I expected to go about it: Set the existing CRS of one of the scanned original sheets to OSGB70 which, as far as I can see is the OS projection using lat/long, fire up the georeferencer, set GCPs at each corner, set the output to OSGB70 & run the transform. Repeat for other sheets. Using these georeferenced sheets pick off GCPs for features on the big map to use the georeferencer to georeference this.

What happened: A grossly distorted map was produced. I think I can see what the problem is; the original is in the OS projection but its CRS is purely pixels & the georeferencer treated it as degrees. But what do I set as the initial CRS to set up the correct transform?

Ah, I've done some of this. Probably the best way of georeferencing old Ordnance Survey 6" maps is to use OS Grid coordinates (not grid references and definitely not lat/lon). If your map images are true, undistorted scans you might, with luck, be able to do this using just two points.

What I normally do is find two features on the map that still exist today, road junctions are good for this. Ideally, one of the features will be near (say) the bottom left corner of the map and the other will near to the top right corner of the map. You will now need the OS grid coordinates for these two points. You can do this by finding each feature in Google Earth. Zoom in on a feature and note its latitude and longitude, then do the same for the second feature. Then convert the lat/lon coordinates to OS grid coordinates using an on-line coordinate converter. The OS web site has one of these, but there are several others, this one for example. Just to remind you again, the coordinates have to be full six-figure eastings and full six-figure northings.

Georeference the map using the two coordinates, set the georeferencer to use Helmert and Linear, and set the Target SRS to EPSG:27700.

Oh, and shout if you have problems.

Added later: Thinking about it, on-line coordinate converters are a pain, you can use QGIS to do the conversions for you. In QGIS go Settings -> Custom CRS..., which will pop up a box like that shown in the picture. Ignore the top half. Copy the text shown below into the "Parameters" field:

Then enter the latitude from Google Earth into the "North" field and the longitude into the "East" field. Then press "Calculate", which will give the the full OS eastings and northings for the point. Ignore the commas. 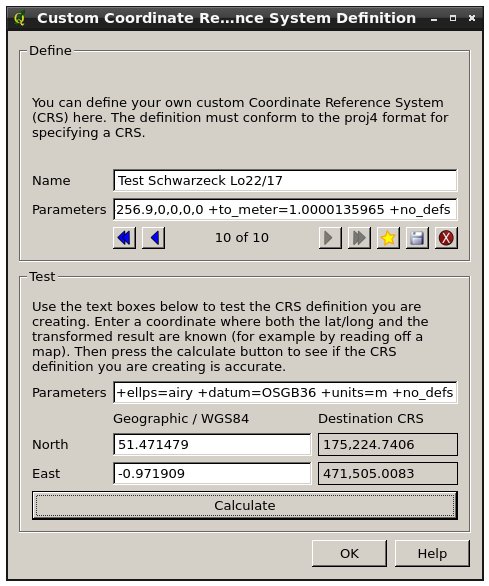 Not the answer you're looking for? Browse other questions tagged qgis raster ordnance-survey or ask your own question.