I'm making a plugin that converts vector .shp to raster .tif. This is the UI of the plugin. The ComboBox is the custom mMapLayerComboBox widget. 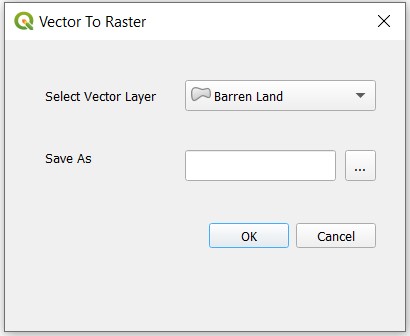 Also, OSGEO/OGR/GDAL needs a string as an argument (the pathfile of the shapefile to be exact) as input. So ogr.Open(layer) gives an error. This is the error:

But running ogr.Open(layer) in Jupyter, where layer = 'datasets/input/Agriculture.shp' gives no error and runs the code properly.

So, 2. How do I get the pathfile of the shapefile from the ComboBox? (if not ComboBox, what other widgets can I use)?

Use in that way:

6
convert vector (point shape) to raster (tif) using python gdal lib in qgis
6
How to get path for layers listed in a combobox?
2
Rename fields of shapefile using PyQGIS 3
2
Retrieving QgsMapLayerComboBox's currently selected layer to get its name for editing in function
0
Unable to rasterize polygons with rasterio in python (ValueError: Sequences of multi-polygons are not valid arguments)
2
Get layer's unit of measurement as string in PyQGIS
0
Shapefile from selected features in PyQGIS
1
Deleting a field using plugin in QGIS 3