I have point features with coordinates, but some of those points have multiple observations at the same coordinate. I put those as a count column in the attribute table. But now I need to do a spatial join to count the number of points in polygons, but I need those points that have high counts to be included in the spatial join count of number of points in each polygon.

Just to clarify: The attribute table consists of multiple species at multiple coordinates. But for some of those records there were many individuals of the same species at that coordinate so that info was inputted as a count column for each observation. Some counts go up to 10000 individuals. I was initially thinking to just copy the record and paste it as a separate record for the number of counts there are but that takes too long.

I assume that your data looks like below. And you need to add the total count of observations to containing polygon features as a new field. 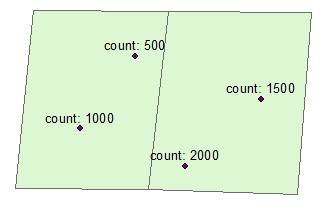 In this case, you can use Spatial Join tool. 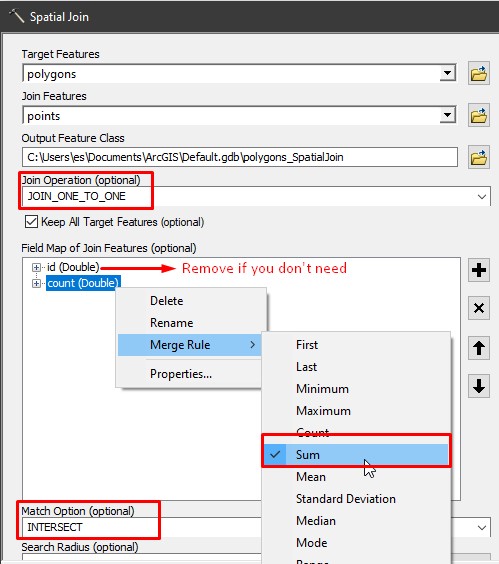 Not the answer you're looking for? Browse other questions tagged arcgis-desktop arcmap spatial-join point-in-polygon count or ask your own question.

0
Interpolating point values to line using ArcMap
2
Count number of points within multipolygon shapefile using OGR
1
Count the number of polygon features within a polygon
1
Count points in polygon by attribute column for making choropleth
1
spatial join with the same merge rules for multiple fields in a single feature class
0
Spatial join (points in polygon) but also including the "observation count" of each point in the join_count field
2
Spatial joins in ArcMap (points to polygons) - capturing points that are just outside of outer boundaries
2
ArcGIS spatial joins: how many species are in an area as well as averaging enviro data (polygon+points)