After downloading and clipping the NLCD 2016 Land Cover Change Index raster and viewing it in ArcMap, the table of contents shows a legend with values 0-12. They are depicted in the following picture: 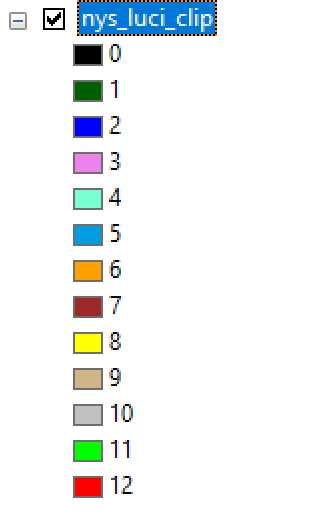 What are these specific values?

I am looking for either an explanation of what the values mean or a link to their description. I gathered the data from the following URL: https://www.mrlc.gov/data?f%5B0%5D=category%3Aland%20cover

The Multi-Resolution Land Characteristics Consortium (MRLCC) (where the data is from) does not seem to provide a description of the values.

I was wondering the same thing, found your question, then pulled up the metadata:

NLCD 2016 Land Cover spans not one but seven target years: 2001, 2003, 2006, 2008, 2011, 2013, and 2016. Rather than compiling six land cover change index products (one for each pair of adjacent target years), there is a single NLCD 2016 Land Cover Change Index product whose pixel values indicate land cover changes that occurred at least once between 2001 and 2016. Each assigned image value represents either “No Change” (Index number 1) or one of the changes described below.

Index number 2 identifies pixels that have changed from any land cover class to Water, or from Water to any other land cover class, between any two adjacent target years. Indices 5, 7, 8, 10, and 21 are similar identifiers of change from or to a single land cover class.

Index 9 meets a special requirement of shrubland research to discriminate where change occurs on persistent shrublands verses change on transitional shrubland areas such as regenerating forests.