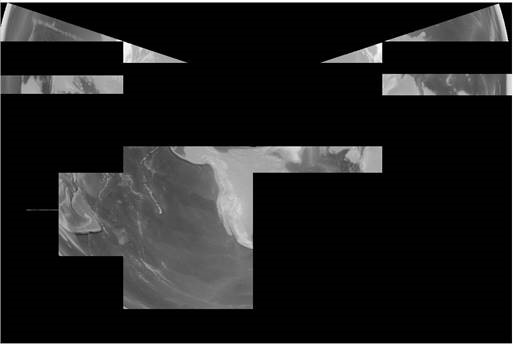 I would like to use the CleanTopo2 raster from http://shadedrelief.com/ to generate a hillshade for a main map of the conterminous United States and inset maps of Alaska and Hawaii (plus portions of bordering and nearby countries within the map extent of each). However, when I try to project the raster and other map layers with an Albers projection, the vector layers look fine but the raster does not align with them. I initially thought that maybe I need to correct how the CleanTopo2's SRS is initially defined before reprojecting it, but I'm not sure if that is the only thing causing the issue since the CleanTopo2 and other layers initially align just fine with a WGS84 projection (and with a custom projection applied to the raster). I first created a custom projection based on Data_Info.txt file that came with the CleanTopo2 dataset--the text file contains the following information:

I also tried simply defining the projection as WGS84 (ESPG:4326). I'm not 100% sure that I defined the custom projection correctly but both methods that I used to define the CleanTopo2 projection (i.e. custom projection and ESPG:4326) display the raster and other shapefiles (containing an ESPG: 4326) aligned.

However, when I next try to reproject the CleanTopo2 and other layers with an Albers projection (as a first step...I will need to reproject everything again with different projections for Alaska and Hawaii inset maps), the global shapefiles project fine but the raster gets extensively sliced up (see attached image) and doesn't align with the other shapefile layers at all. Can anyone please help me figure out how I can get this raster to project correctly and align with the other projected shapefile layers? I've tried to figure this out for a while but am really stumped.

I think I figured out the root of the issue with help from a friend--since Albers is a regional projection, its parameters aren't valid for a global extent. To get the raster into the Albers projection, I first clipped it down to an extent slightly larger than the land area that would need to be shown in the map and then reprojected it. That did the trick!

Not the answer you're looking for? Browse other questions tagged raster coordinate-system global or ask your own question.