I am currently having some trouble finding a good interpolation technique for unevenly distributed spatial data points. Let's give a quick example :

I have a 1000 points dataset. As several surveys were made in the past, several spatial spacing were used. Some of them use a 200 meter grid (red bounding box), whereas other used a 1 km grid ( blue bounding box, see image below for a quick drawing). I merged all the datasets and now i would like to interpolate the data in an even grid. The data here just have spatial components (x and y in projected system) associated with the variable of interest, there is not time component to this data.

I usually use ordinary kriging or IDW, but they do not feel quite appropriate in this case, as they will be influenced by the proximity change of neighbouring data points. My search on the internet did not lead me to a solution.

Edit : Those methods seem inappropriate for me at the moment as a search algorithm based on a diameter will use more samples in areas of high density compared to low density regions, that may bias interpolation, in my opinion.

Did you already encounter such a problem with spatial data ? How did you manage to handle it ? 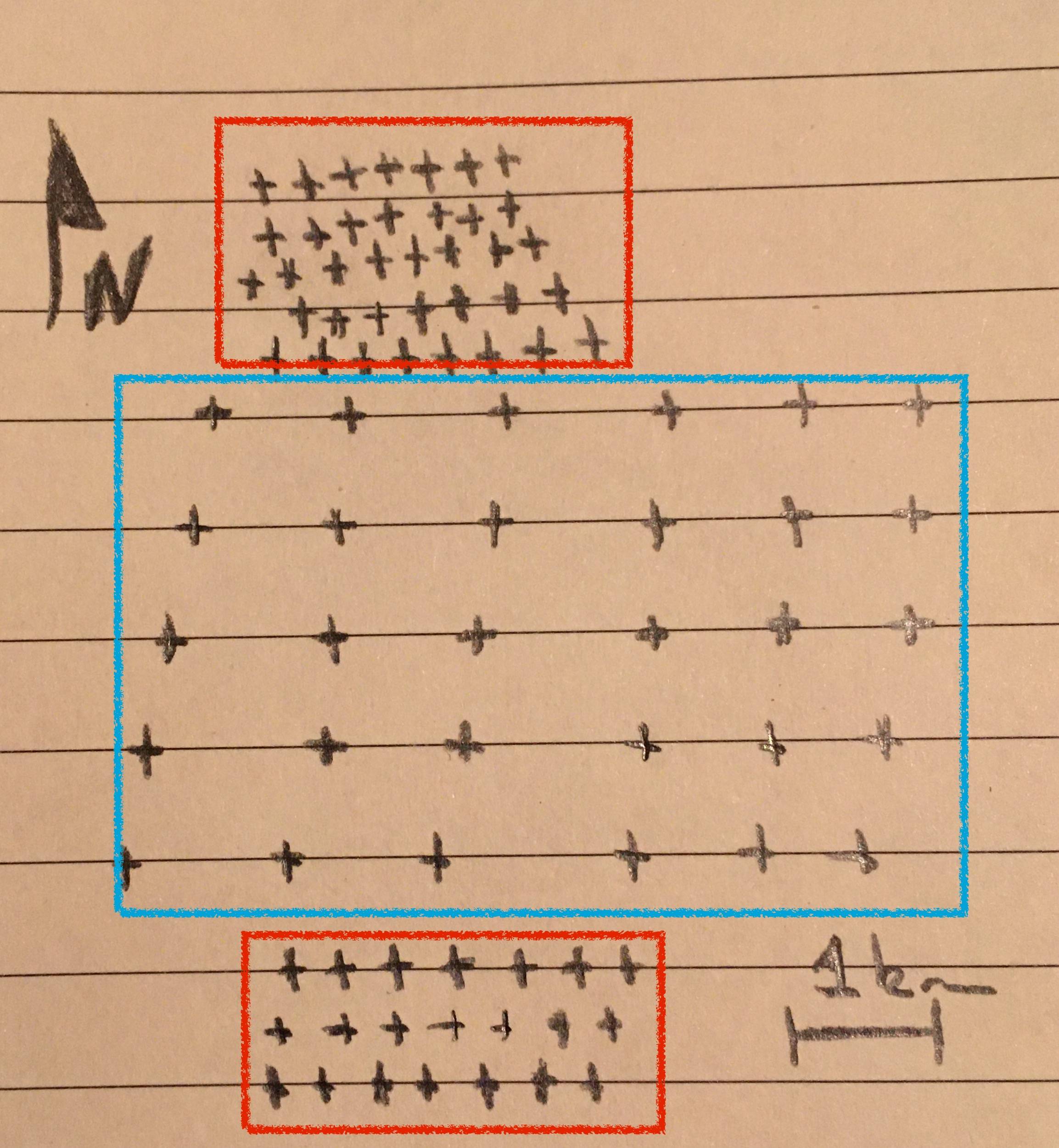 I don't think you will necessarily BIAS the interpretation or the underlying interpolation - rather you will improve it in areas of closer sampling. Remember that all common interpolation methods are based on getting estimations of the value at points on a regular grid by searching values at original measurement points in the vicinity based on user-specified parameters (search distance, sill for semi-variograms etc). The fact that you have multiple measurement points on which to base the estimation in some areas is a good thing, no matter whether you use a form of kriging or IDW. The fact that some values in sparsely-sampled regions might be estimated on the basis of just one original measurement point is problematic but unavoidable unless you set the search parameters very widely.

Your biggest problem would be if there was estimation bias in one survey relative to another: for example, if these were soil geochemical sampling points but the surveys used slightly different collection procedures or analytical methods. If this was the case then you might need to "level" the surveys before interpolation There are multiple ways to do this but I won't go into details as I don't know if this is your issue.

You could probably get an indication if leveling issues existed by comparing the histograms for each survey. This is not something I have done in QGIS but there is some information here: Create histograms in QGIS.

Not the answer you're looking for? Browse other questions tagged point interpolation kriging inverse-distance-weighted or ask your own question.