I am after a description/methodology for conducting a Geographically Weighted Principal Components Analysis (GWPCA). I am happy using Python for any portion of this and I imagine SPSS or R being used to run the PCA on the geographically weighted variables.

My dataset is composed of roughly 30 independent variables that are measured throughout ~550 census tracts (vector geometry).

I know this is a loaded question. But, as I search and search, there does not seem to be any solutions out there. What I have come across are mathematical equations that explain the fundamental composition of GWPCA (and GWR). What I am after is more applied in a sense, that I am looking for what major steps I need to accomplish to get from raw data to the GWPCA results.

I would like to expand on the first part with this edit due to the comments received below.

I am basing my interest in GWPCA off of the following paper:

For those who do not have access to the literature, I have attached screenshots of the particular sections which explain the mathematics below: 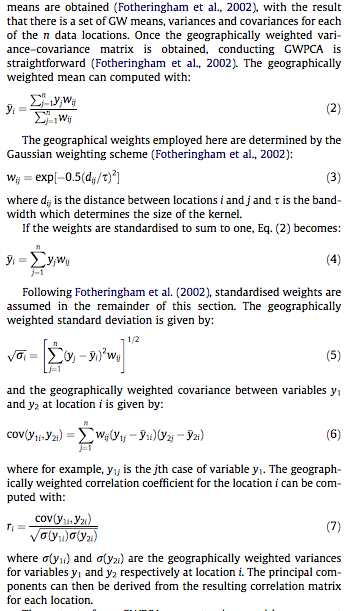 Without going into detail (confidentiality), we are attempting to reduce the 30 variables, which we believe are all very good indicators (albeit globally), to the set of components with eigenvalues greater than 1. By computing the geographically weighted components, we attempt to understand the local variances explained by these components.

I think our primary goal will be to proof the concept of GWPCA, that is, show the spatially explicit nature of our data and that we cannot consider all independent variables to be explanatory on a global scale. Rather, the local scale (neighbourhoods) that each component will identify will aid us in understanding the multi-dimensional nature of our data (how variables can be combined with one another to explain a certain neighbourhoods in our study area).

We hope to map the percentage of variance accounted for by each component (separately), to understand the extent of the neighbourhood explained by the component in question (aid us in understanding local spatiality of our components). Perhaps some other mapping examples but none come to mind at the moment.

The mathematics behind the GWPCA is beyond what I understand given my background in geographic analysis and social statistics. The application of the maths is most important, that is, what do I plug in to these variables/formulas.

"Geographically weighted PCA" is very descriptive: in R, the program practically writes itself. (It needs more comment lines than actual lines of code.)

Lets begin with the weights, because this is where geographically weighted PCA parts company from PCA itself. The term "geographical" means the weights depend on distances between a base point and the data locations. The standard--but by no means only--weighting is a Gaussian function; that is, exponential decay with squared distance. The user needs to specify the decay rate or--more intuitively--a characteristic distance over which a fixed amount of decay occurs.

PCA applies either to a covariance or correlation matrix (which is derived from a covariance). Here, then, is a function to compute weighted covariances in a numerically stable way.

The correlation is derived in the usual way, by using the standard deviations for the units of measurement of each variable:

Now we can do the PCA:

(That's a net 10 lines of executable code so far. Only one more will be needed, below, after we describe a grid over which to perform the analysis.)

Let's illustrate with some random sample data comparable to those described in the question: 30 variables at 550 locations.

Geographically weighted calculations are often performed on a selected set of locations, such as along a transect or at points of a regular grid. Let's use a coarse grid to get some perspective on the results; later--once we're confident everything is working and we are getting what we want--we can refine the grid.

There's a question of what information we wish to retain from each PCA. Typically, a PCA for n variables returns a sorted list of n eigenvalues and--in various forms--a corresponding list of n vectors, each of length n. That's n*(n+1) numbers to map! Taking some cues from the question, let's map the eigenvalues. These are extracted from the output of gw.pca via the $sdev attribute, which is the list of eigenvalues by descending value.

This completes in less than 5 seconds on this machine. Notice that a characteristic distance (or "bandwidth") of 1 was used in the call to gw.pca.

The rest is a matter of mopping up. Let's map the results using the raster library. (Instead, one might write the results out in a grid format for post-processing with a GIS.) 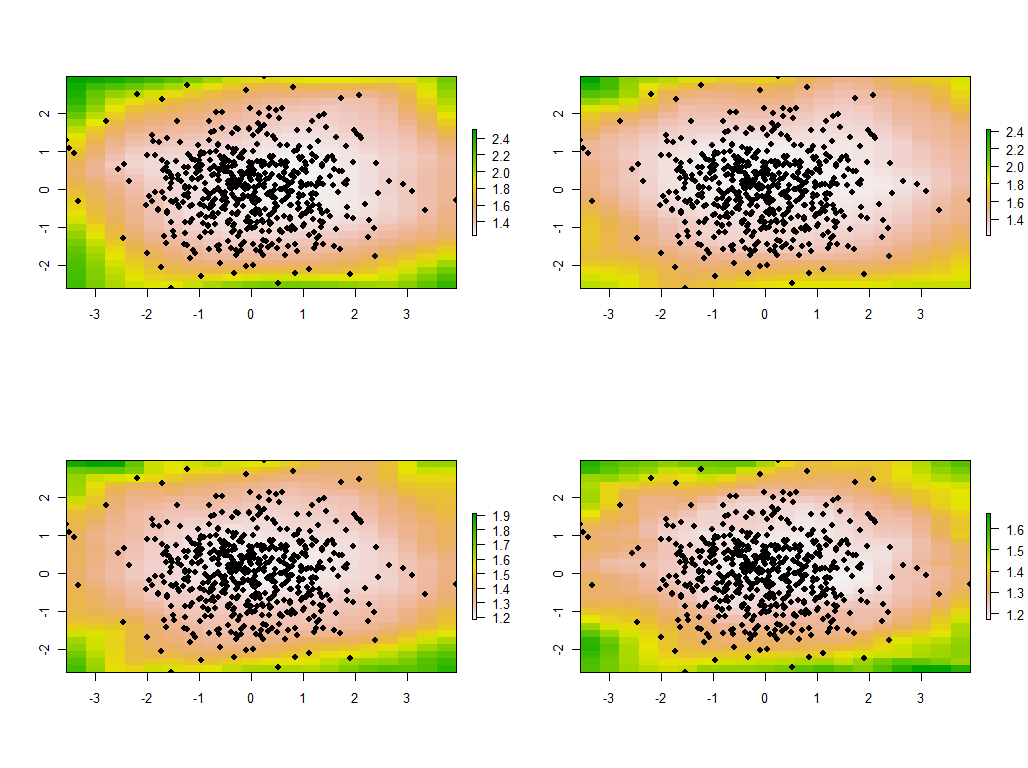 These are the first four of the 30 maps, showing the four largest eigenvalues. (Don't get too excited by their sizes, which exceed 1 at every location. Recall that these data were generated totally at random and therefore, if they have any correlation structure at all--which the largish eigenvalues in these maps seem to indicate--it is solely due to chance and does not reflect anything "real" that explains the data generation process.)

It's instructive to change the bandwidth. If it's too small, the software will complain about singularities. (I did not build in any error checking in this bare-bones implementation.) But reducing it from 1 to 1/4 (and using the same data as before) does give interesting results: 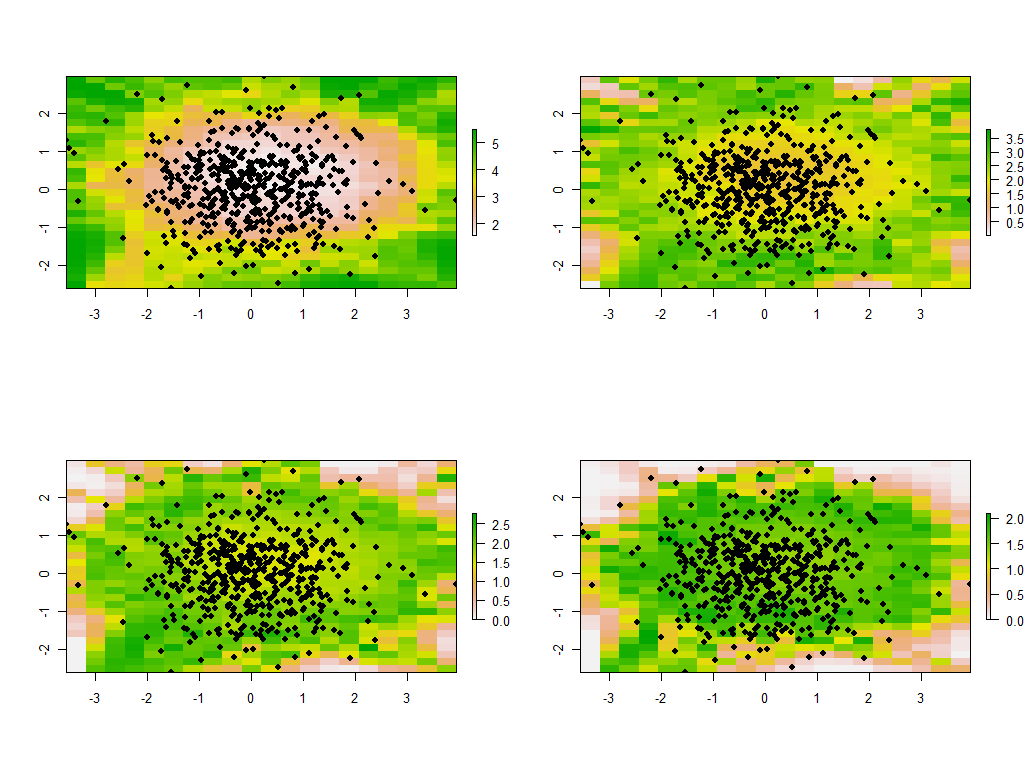 Note the tendency for the points around the boundary to give unusually large principal eigenvalues (shown in the green locations of the upper left hand map), while all the other eigenvalues are depressed to compensate (shown by the light pink in the other three maps). This phenomenon, and many other subtleties of PCA and geographic weighting, will need to be understood before one can hope reliably to interpret the geographically weighted version of PCA. And then there are the other 30*30 = 900 eigenvectors (or "loadings") to consider... .

There is now a specialized R package available on CRAN - GWmodel that includes geographically weighted PCA among other tools. From author's website:

Our new R package for Geographically Weighted Modelling, GWmodel, was recently uploaded to CRAN. GWmodel provides range of Geographically Weighted data analysis approaches within a single package, these include descriptive statistics, correlation, regression, general linear models and principal components analysis. The regression models include various for data with Gaussian, logistic and Poisson structures, as well as ridge regression for dealing with correlated predictors. A new feature of this package is the provision of robust versions of each technique – these are resistant to the effects of outliers.

Locations for modelling can be either in a projected coordinate system, or specified using geographical coordinates. Distance metrics include Euclidean, taxicab (Manhattan) and Minkowski, as well as Great Circle distances for locations specified by latitude/longitude coordinates. Various automatic calibration methods are also provided, and there are some helpful model building tools available to help select from alternative predictors.

Example datasets are also provided, and they are used in the accompanying documentation in illustrations of the use of the various techniques.

I doubt if a 'ready to use, plug in your data' solution exist. But I'm very much hoping to be proven wrong since I'd love to test this method with some of my data.

Some options to consider:

In the article they provide specification for WinBUGS model executed from R that might get you started.

adegenet R package implements spca function. Although it focuses on genetic data, it might as well be as close to a solution for your problem as you can get. Either by using this package/function directly, or modifying its code. There is a vignette on the problem that should get you up and running.

Researchers at Strategic Research Cluster seems to be actively working on the topic. Especially Paul Harris and Chris Brunsdon (here presentation I stumbled upon). Paul and Urska's recent publication (full text) might also be useful resource:

Why don't you try contacting them and asking about what solutions exactly they are using? They might be willing to share their work or point you in a good direction.

paper mentions using GeoDAS GIS system. Might be another lead.

Not the answer you're looking for? Browse other questions tagged r spatial-statistics or ask your own question.