I'm trying to determine population inside Special Flood Hazard Areas. To do this I'm doing a spatial join of census shapefiles with the FEMA National Flood Hazard Layer, using the Boolean field SFHA_TF to identify areas inside the Special Flood Hazard Area. The map shows that the SFHA cuts through tracts, taking pieces of some, all of others. But when I join the two tables, the resulting attribute table contains multiple copies of the entire tract; it does not split the tract into pieces (for example a quarter of the tract if the SFHA occupies 1/4 of the tract). Is there a way in QGIS to do a spatial join between two polygons that will get proportionate shares of the joined polygon? . 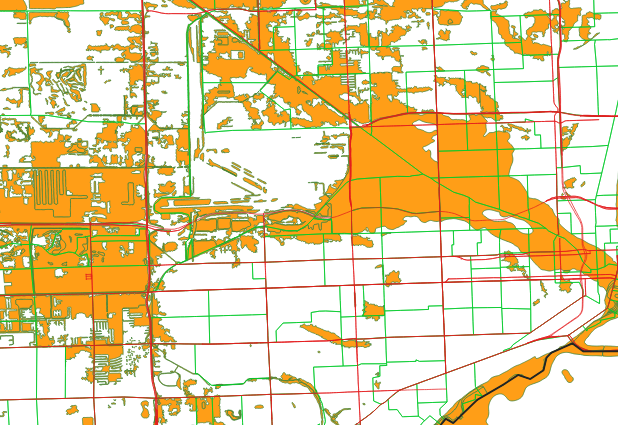 There is a plugin which provides markedly different functionality to the stock standard VECTOR | INTERSECTION (or did you use spatial join??) detailed here and available via the standard plugin menu.

Not too sure what your end product is intended to be...

Not the answer you're looking for? Browse other questions tagged qgis census flood or ask your own question.

5
After performing a table join, all the fields are “NULL”
1
Simple Spatial Join of Point Feature to Polygon Target Feature Not So Simple (Source Files Included)
0
How can I fix my spatial join issue?
1
Calculating population density from urban raster reclasiffy
1
Summing data from a smaller boundary shapefile to a larger boundary shapefile if the boundaries do not align in ArcGIS Pro?
5
Spatial join based on polygon centroid in QGIS
2
Tabulating average value through spatial join in QGIS
2
Automatically output joined fields in input layer while using spatial join