I have 2 projects, with data from different regions and with different EPSG, 1 with EPSG 31983 and the other with EPSG 31984, according to the folder structure shown below, in Windows explorer.

In both projects I have the same folder structure and file names. I created a QGZ project in QGIS 3.12, using project data 01 (EPSG 31983), included the data (vector and raster), defined the project's symbology and visual coordinate system as being EPSG 4674 (figure below). 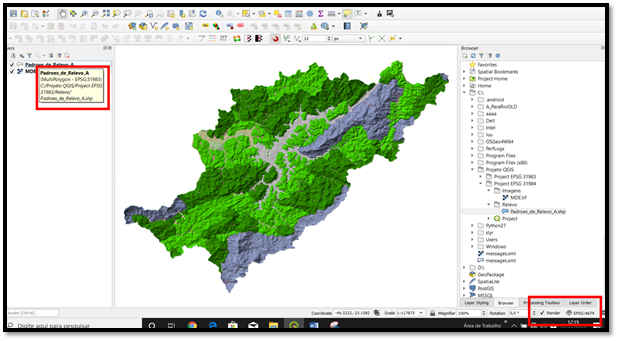 I opened QGIS again, now choosing the QGZ project that I previously copied into the folders of project 2 (EPSG 31984) The project opened normally, however when reading the two themes QGIS kept the EPSG of the previous themes (project 1), or that is, he fetched the data correctly, applied the symbology but kept EPSG 31983 for project 1 not updating to EPSG 31984 for project 2. 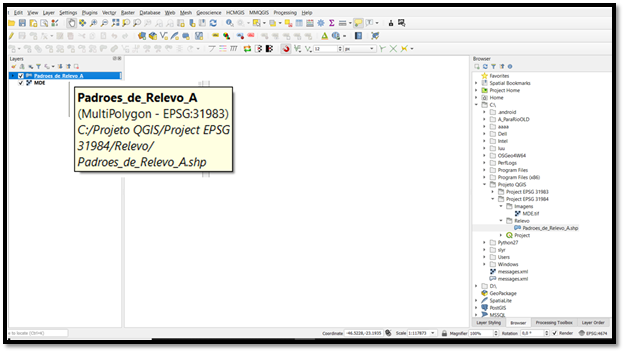 I need to apply this example to several projects, just by copying and pasting the “.QGZ” from one folder to another.

How do I get QGIS to automatically update the EPSG of the data being presented, in the same way as it updates the symbology for the new data being loaded?

The shapefile file inside the folder 'Project EPSG 31984' is set to EPSG: 31984. I checked it. I am referring to CRS. The problem is that QGIS is memorizing the EPSG of the shapefile within the QGZ project, and then, when I make a copy of the QGZ project (copy / paste) to the other project, QGIS does not change the EPSG when reading the new shapefile. I am trying to show that when copying the .QGZ project from one folder to another, QGIS updates all data to contain the shapefiles in the new folder, however, it does not update the coordinate systems (CRS), causing problems. There any suggestion to solve this?

Browse other questions tagged coordinate-system epsg qgz or ask your own question.

2
Setting NAD 1983 EPSG 102631 in QGIS?
1
Can't save map with different projection in QGIS
2
Projection problem when opening a .netcdf file on qgis
1
Convert decimal degrees to meters QGIS
2
Converting GeoTIFF from EPSG:4326 to Spherical Mercator using QGIS
0
QGIS 3.10: setting default CRS for new projects is ignored
0
Has anybody else experienced having issues opening QGIS or .gqz project files on macs?