Ask Question
Asked 11 months ago
Active 11 months ago
Viewed 34 times
1
This question already has an answer here:
Auto incrementing field based on groups within feature class? (1 answer)
Closed 12 months ago.

I have an attribute table with three fields: Id, Name, and Id_2 and 18,701 records. I would like to populate Id_2 with consecutive integers for each unique value in the Name field. Prior to running the script, Id_2 is empty. Below is an example of what I would like the final attribute table to look like. 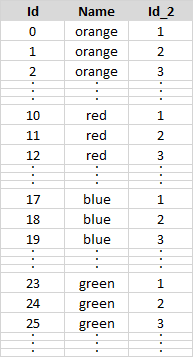 Below is the python script that I have developed. Note that I have built a dictionary using the Name field as the keys and the Id field as the values. I don't need to use the values, however, to accomplish this task, just the key. My code produces consecutive integers, however, the sequence doesn't reset with each unique value in the Name field. Rather, my code populates Id_2 with consecutive integers for the entire table, through record 18,701 (Not what I want!).

For a start ID is irrelevant in your fields, you only need the two fields being worked on 'Name', 'Id_2'. You've also set up a search then an update, you don't need to do this, a single update is enough; what you're after in much less code:

The dictionary stores name:value pairs so each unique name (case sensitive) can keep a single count separate from the counts of other unique name. If your name:values do need to be case sensitive then take out the .lower() which forces all names to be lower case - also a good idea to .trim() if your data is suspect to remove leading and trailing spaces.

Not the answer you're looking for? Browse other questions tagged arcpy python cursor dictionary or ask your own question.

1
building dictionary from feature class field values, how can I ensure there are no duplicate values per key
0
Populate field with information from a different field based on matching record
0
Using ArcPy to ListFields inside SearchCursor?
0
Iteratively Filling a Dictionary and Updating a Feature Class
4
Filling dictionary with list of row attributes using arcpy.SearchCursor
4
ArcPy UpdateCursor and Dictionary
0
Error when trying to populate a Dictionary with arcpy.da.SearchCursor using file paths and field name lists