The intranet our company is using is combining shapes to form larger shapes. This is using code that is lost in the darkest realms of extremely bad practices, but for the most part it is okay.

However, we're having some issues if, say, two geometries touch each other, but their nodes do not exactly match. See the below example: 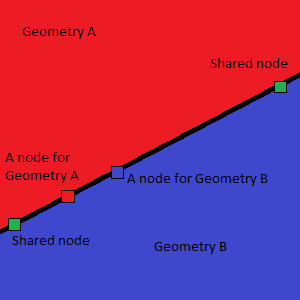 This causes an error in the procedure which unions them (I think it's just STUnion, but again the code is pretty buried) but, if we were to manually remove the nodes in-between, then it works fine.

Is there a way in SQL to get the nodes to match up? Quite possibly by gravitating towards the nearest node? Then what do we do about duplicate nodes?

Browse other questions tagged sql geometry sql-server geometry-data-type or ask your own question.