Extracting polygons along a border

I would like to repeat this procedure for every other pair of counties along the Georgia and North Carolina (in addition to other borders, which is why I would like to streamline the process).

Are there hints for streamlining this process? I know how to do it by brute force, but I realize it can take awhile or be inaccurate. I was just wondering if there is a more efficient way to do this. 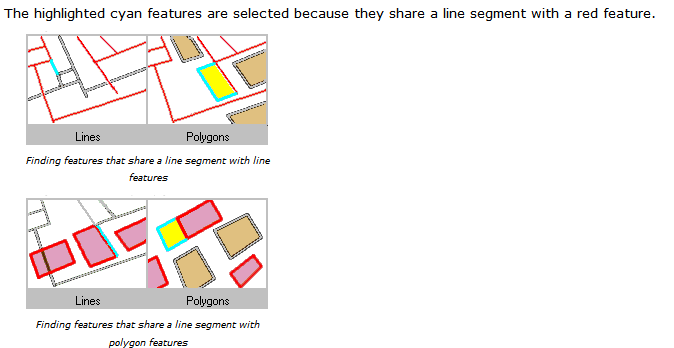 With this method, the source and target features are considered as sharing a line segment if their geometries have at least two contiguous vertices in common.

The source and target features must be either lines or polygons.

The highlighted cyan features are selected because they share a line segment with a red feature.

Programatically you could use a Cursor with Select By location.

The output is really up to you as I'm not sure how you're planning on using the information. You could append all of the county names in a list and add it to a field. You could create a related table and add a record for each individual bordering county.

In order to select the counties of interest with arcpy build your code around this pseudo code:

Hopefully this should get you started:

Let ArcGIS do all the work. 10.1 has a new tool called "Polygon Neighbors", under Analysis Tools, Proximity, that basically builds an adjacency table for you. You can review the resulting Table, deleting the entries where "Src" and "NBR" are from the same State.

Not the answer you're looking for? Browse other questions tagged arcmap arcgis-10.1 borders or ask your own question.

1
Adding information about adjacent features to data using ArcGIS Desktop?
6
How to meassure the length of common edges between polygons?
2
Drawing a Straight Line Between Two Polygons on a Map and Listing Which Polygons It Passes Through
2
Compiling a list of units that border each other
12
Partitioning Line into Segments using ArcGIS Desktop?
1
Distance of many polygons to a segmented line
2
District border join in Google maps
3
Extracting border between contiguous polygons using ArcGIS for Desktop?