I am learning to use GeoServer. I published a layer from a shp, which I created by importing a csv file into QGIS in utf-8 encoding, and exporting as shp in utf-8 encoding. I added a style to the layer. I got the style from geoserver cookbook for point with default label. The only thing I changed is the contents in <ogc:PropertyName>, as I have to set it to the name of the column I want to show. I changed it into school_name. But then the layer doesn't show in layer preview.

So how do I show Chinese labels? And how do I fix the problem where column names with underscore doesn't show?

Here's how my problem was eventually fixed. I made two key mistakes regarding the Chinese character problem (dbf encoding encoding setting in data store and font in sld), and one mistake regarding the underscore problem (column name length).

This is actually an encoding and font problem. The first mistake I made was not setting the dbf encoding when creating the data store of shp directories. To fix these mistakes, set the dbf encoding as in the image. In this case the correct encoding is utf8 (see figure). 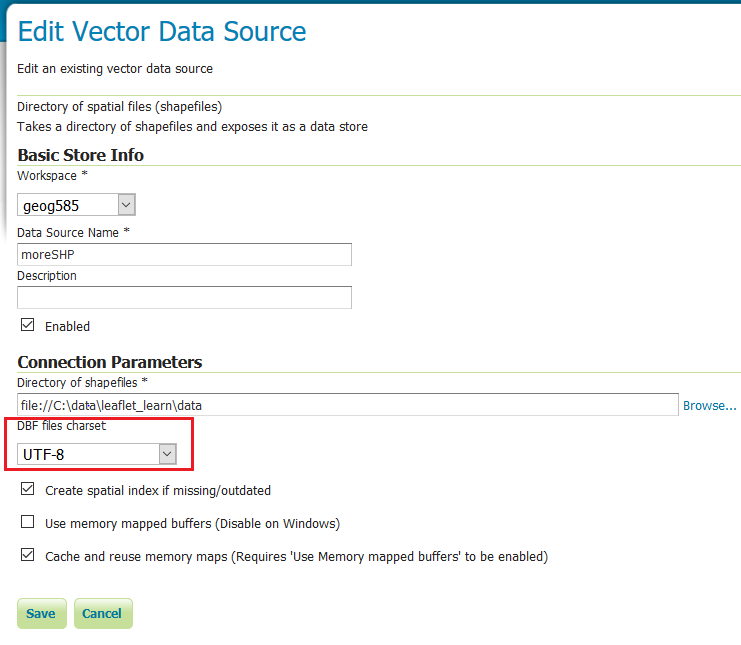 note: The layer created from the csv in QGIS had the correct column names. But after exporting it as a shp and re-importing it to QGIS, I could see that the names were truncated. So take caution that the column names of the shp may be different from the original layer used to create it.

Not the answer you're looking for? Browse other questions tagged geoserver sld encoding or ask your own question.