I am trying to do some spatial generalised linear mixed models for areal unit data with the CARBayes package. As part of this, I need to identify the polygon neighbours into a neighbour list using spdep::poly2nb.

The shapefile I have of NSW is located here: Dropbox with shapefile

There is a freely available Australia wide version at: ABS.gov.au but I'm only after NSW. 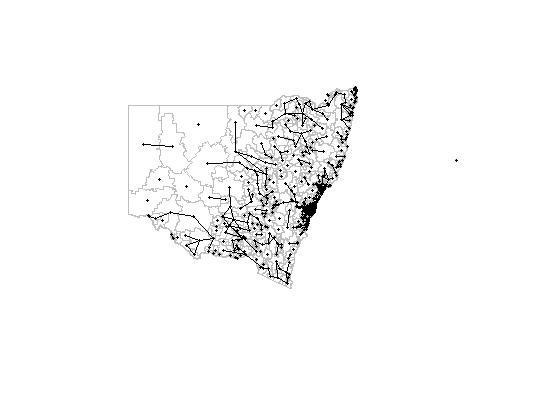 For some reason poly2nb isn't recognising that some of the polygons are neighbours to each other. I've tried using the snap feature but this only vaguely works at snap = 0.0001. It also adds connections to non-neighbours. 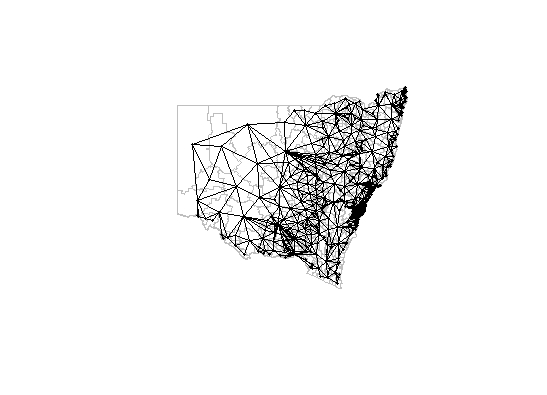 I'm not sure if its a topology issue but lwgeom::st_is_valid says that the polygons are valid.

Any ideas would be amazing. I'm very new to writting these questions properly so any feedback is welcome. Many thanks

Although I thought poly2nb used the "overlaps" test for determining adjacency, I do get a different set of adjacencies if I explicitly use st_overlaps and build an nb object. This looks closer to the correct form of adjacency. 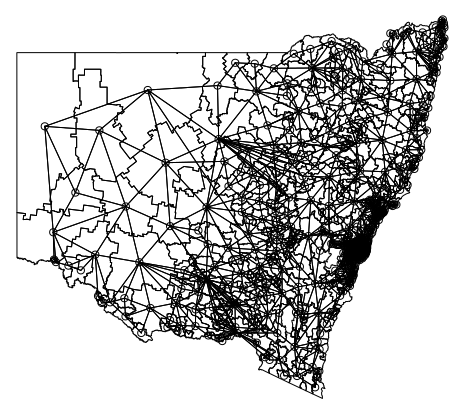 Note this is a listw object, but the $neighbours element is a nb object.

There's some difference between this and your "extra tolerance" version:

For example the second region has two more neighbours in the extra tolerance version than in the overlaps version: 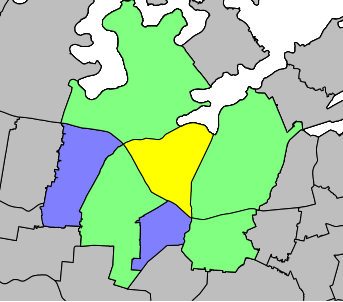 I don't see any evidence of the increased snap tolerance adding neighbours where there's no close connection, except as above where it has added a connection where there seems to be a single point common to the yellow and one of the blueish polygons.

Another approach to adjacency is to compute st_distance and apply a near-zero cutoff. This should work well and is flexible enough that you can increase the tolerance enough to jump over digitising errors or very small gaps caused by narrow rivers between regions.

Not the answer you're looking for? Browse other questions tagged r autocorrelation spdep or ask your own question.

6
Stats on individual grid points nearest neighbours
3
Out-of-Sample predictions with spdep::sarlm
1
qgis errpr :The following layers were not correctly generated
3
Classifying raster that takes neighbours into account?
2
Converting Spatial Points to Neighbours List using R?
1
Defining polygon object by identifying lines in R
1
Why do these coordinates not display correctly (or intersect correctly) with this boundary file?
2
R {spdep} Get list of neighbors from nb object