We had a PostGIS database which was initialized quite some time ago using an osm.pbf file from Geofabrik, without a specified coordinate system. It defaulted to using EPSG 900913 (Google Maps Global Mercator)

When we compare the two databases, we can see a very clear coordinate drift (see pic) 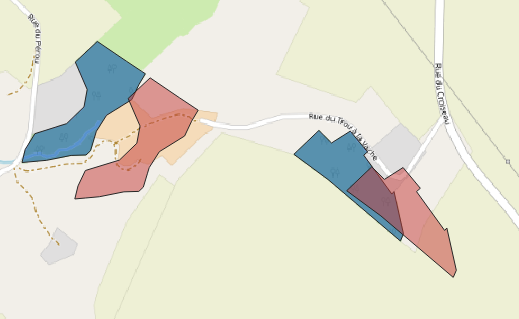 Geodesy is really not my specialty. A colleague and I spent some time going over it trying to figure out which one is right.

It is my understanding that the OSM dumps from Geofabrik are in WGS84 natively so I am confused as to why they are ending up in two different places.

This is quite a big issue for us because a previous analysis workflow did all the coordinate transformations manually, while a new workflow is trying to initialize everything in the same coordinate system and just use it for the entire duration.

How can we stop this coordinate drift?

It turns it it was a lot less complicated that I thought. The simple fact is that EPSG 31370 (Belge 1972 / Belgian Lambert 72) is just an old and outdated CRS. We re-initalized the database in EPSG:3812 (ETRS89 / Belgian Lambert 2008) and everything is exactly where it should be.

Not the answer you're looking for? Browse other questions tagged coordinate-system openstreetmap osm2pgsql or ask your own question.