I have a simple project in QGIS 3.10.5: a polygon layer and a point layer. When the user add a point feature which intersects a polygon feature, a calculate field make this intersection and get the id attribute of the polygon feature.

In my desktop project, I used refFunctions extension, and result is ok. I have a calculate field in my point layer with an expression: geomintersects('polygonLayer', 'polygonID').

I deployed this project in QField and refFunctions isn't working anymore, even when geopackage is synchronised with desktop project. I tried an other expression without using, refFunctions but it's not working better.

How to calculate an intersection between two layers (and get an attribute value) with QField?

Can I use a "native" QGIS function to make this intersection in a calculate field? (without using aggregate because my field is an integer id)

In my point layer, I also have a date field wich have a default value format_date( now(),'yyyy-MM-dd HH:mm:ss'). When I add a feature in QField, date is well calculated and displayed in the form but aggregate function result isn't. When I synchronize my layer with QFieldSync, date value is ok but my intersection field with aggregate function is NULL.

How to explain this? Both are functions, why behaviours are different?

Documentation seems to indicate, this should works, maybe I'm missing something.

refFunctions won't work in QField as it is a QGIS desktop plugin (and is the downside of the many answers that rely on a plugin for expression-based solutions) - QField won't recognise the functions.

With your aggregate expression, consider using expression:=to_string("polygonID") if the polygonID field is numeric, as concatenate only works on string values.

If your expression isn't working because the underlying field name has changed, you have two options:

You can obtain the layer ID in the Expression window under Map Layers; double-click the layer you want. 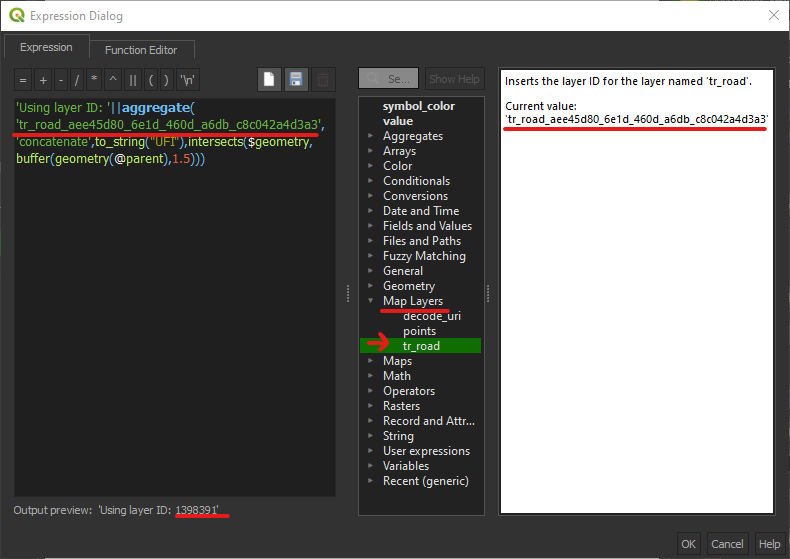 The downside to layer IDs is that they are unique each layer in a project. If your aggregate expression is designed to always pick up a specifically named layer but you expect it to refer to any potential layer with that name (including a layer you might add later, or another layer renamed accordingly), it won't work.

In this instance you will need to use layer_property() to test whether a layer exists - if it doesn't it simply returns a NULL and afaik is the only way to "except" the termination error that aggregate() returns when an invalid layer name is provided - which as you've experienced, is not very helpful....

For the specific QField use case where the layer name change is predictable and your aggregate() expression only needs to look at one of two options, try the following expression to use either layer name or layer name (offline)

For more complex cases where you want it to pick the first of a potentially long list of layer names, consider using with_variable() and array functions instead, so you can more easily edit your list at the top of your expression and add/remove items easily. I have put that expression in the relevant GitHub discussion thread here.

Not the answer you're looking for? Browse other questions tagged qgis qgis-3 qfield qfieldsync or ask your own question.

8
Making automatic updated date and time field in QGIS?
6
Update/change/commit an attribute/a field value “on the fly” in QGIS 3
1
Displaying attribute value from related layer in QGIS Atlas?
2
write z-value from polygon layer to point layer in QGIS
5
Counting number of features within another feature using aggregating function in field calculator of QGIS?
2
Geopackage is not visible in QField offline editing mode