When is a 3D Visualisation in GIS Useful? [closed]

I can currently only think of two cases:

Whilst 3D data is often critical (for floodplain analysis, river profiles, geological surveys etc.) does a 3D viewer add anything?

From someone who is part of the "GE Generation"

When you are visualizing atmospheric features, it is important to see a vertical profile of the atmosphere. 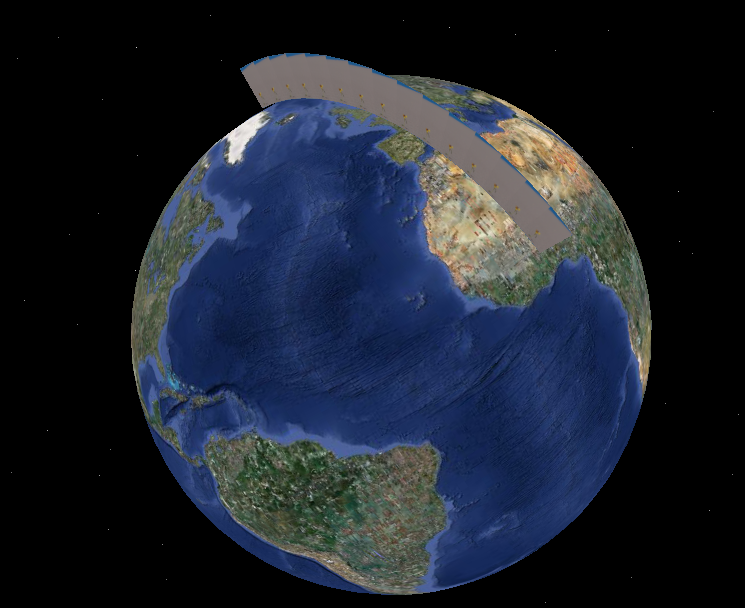 When working sub-surface (bore holes, or earthquakes as shown below). In the image below, magnitude is mapped to pin size, but depth is mapped (inverted) to altitude. This image clearly shows the subduction zone below the Andes, and how earthquakes that occur east of the Andes are at a deeper depth. 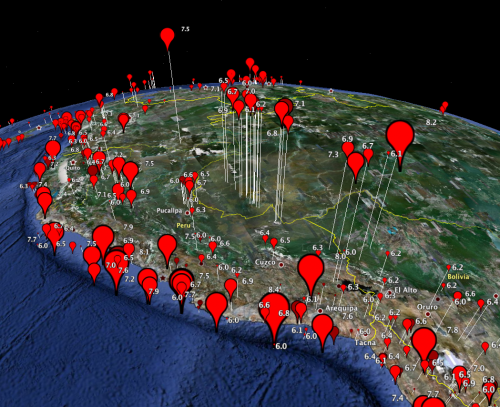 This might be grouped in with the first image as atmospheric, but if you want to see interactions between the Sun and Mars, or as shown below, magnetic field lines, 3D is helpful: 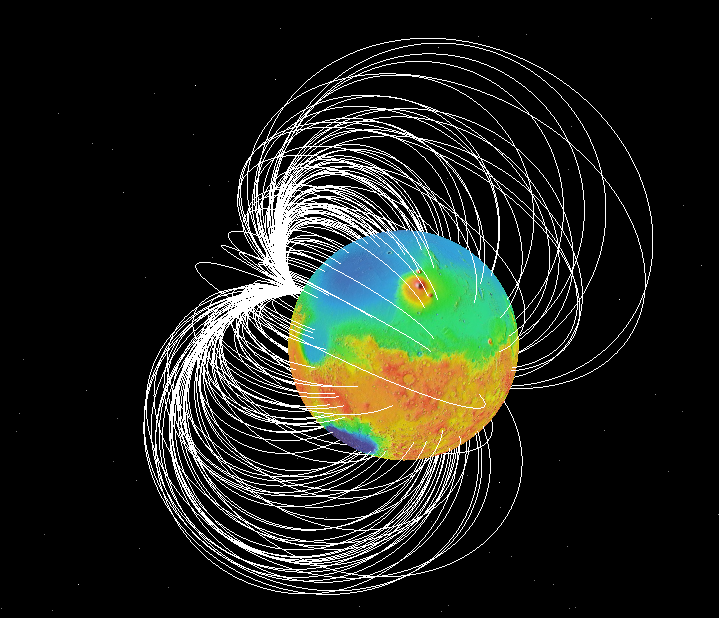 I use it (in)frequently for

I think both your points sum up the A to the Q quite well.

Some examples where its useful:

I think a key problem with 3D is the 'Google Earth Generation' (I just made that up), think that displaying everything in 3D is a good idea.

This kind of belongs on the bad maps link, but take this example: 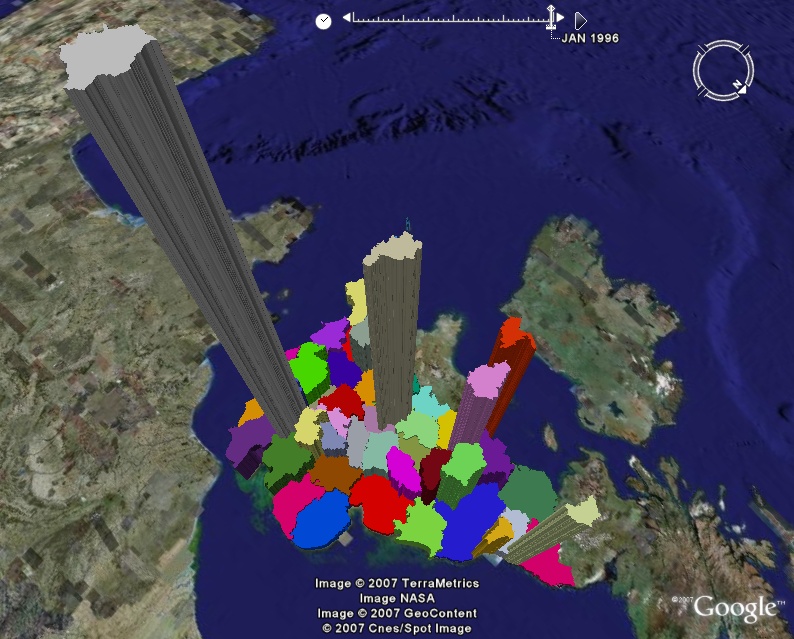 Saying that, I am sure people may laugh at this post in years to come, as the move to augmented reality, is kind of a new breed in 3D GIS anyway?

Environmental investigations are inherently three dimensional. As a simple illustration of what some environmental data might look like, here is an image from a simple 3D GIS I created (using VRML) in the '90s. 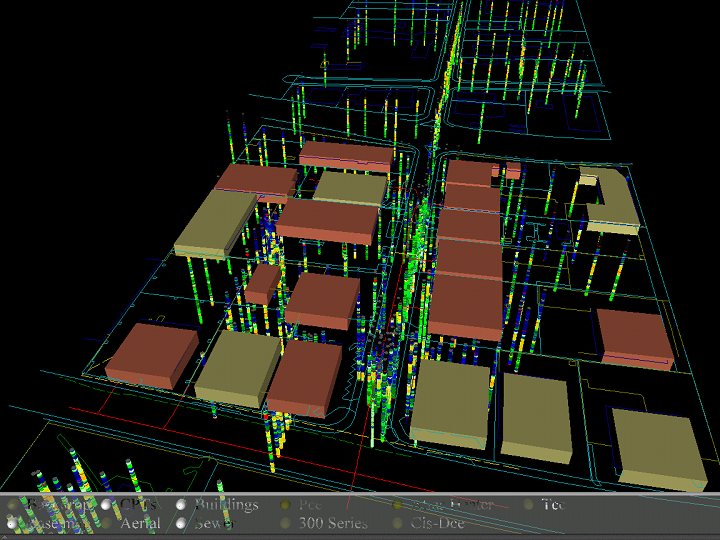 The box-like structures are buildings in an office park. The multi-colored "straws" display subsurface geologic readings taken every one to five centimeters down to 10 meters below ground surface. (There are over 400 of them here, collectively displaying over 80,000 values.) The colors distinguish soil properties. Visualizations like this help us understand where contamination might be, how it got there, and where it might go: all of them crucial questions. A better visualization might include semi-transparent "clouds" to show plumes of groundwater contamination, arrows to show the 3D vector field of groundwater flow velocities, and subsurface structures like sewers. (At the time I had to use AVS to do things like that, a 3D visualization platform that uses graphical modeling to process and display 3D data.)

An easy-to-use, powerful, ubiquitous 3D platform to support the easy creation of and direct interaction with these kinds of data could revolutionize the design and analysis of environmental investigations and geological studies.

I TA for a 3D Visualization course, and in my opinion there is certainly a place for 3D visualization in GIS.

For example, bringing a DEM (Digital Elevation Model) in ArcScene (or an equivalent program) allows you to view the X, Y AND Z (elevation) values. You can then bring in additional layers that have no elevation reference and "steal" the DEM's Z-values. These layers would essentially be draped on top of the DEM. From here, you can do all sorts of neat things, like create a viewshed for a particular point (e.g., mountain top), create custom animations (e.g., fly-throughs), or simulate certain scenarios (e.g., flooding a given region).

Additionally, Google has an excellent 3D Warehouse which contains thousands of customized symbols that have been digitized by people across the world using Google Sketchup. Although many of these symbols may not be worth a second look, there are also some extremely detailed models that can be found and downloaded (a star rating helps identify these). Once downloaded, these images (common extension .skp) can be used as the symbology for a simple point feature found in ArcScene. Adding an offset to this point shapefile then allows your new image (e.g., a black hawk helicopter) to appear to be flying on top of your landscape.

Here are a few snapshots of these examples: 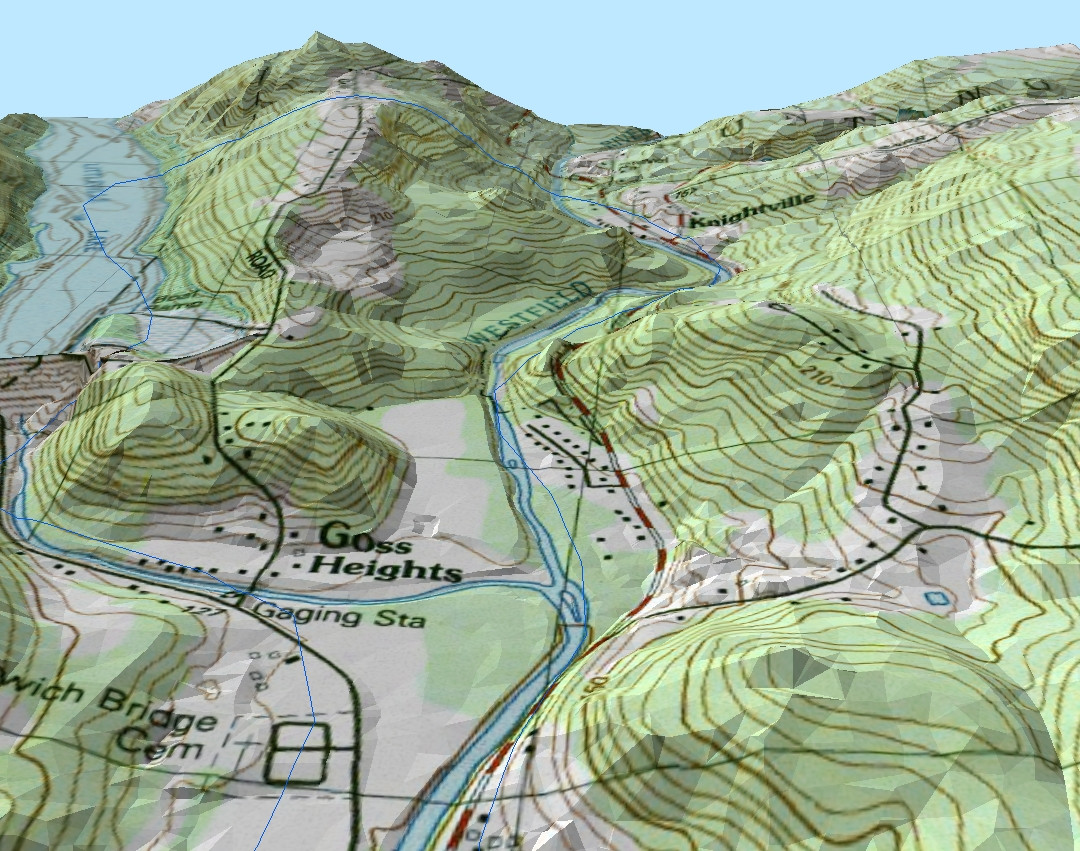 This is what the terrain looks like after a 10m rise in water levels: 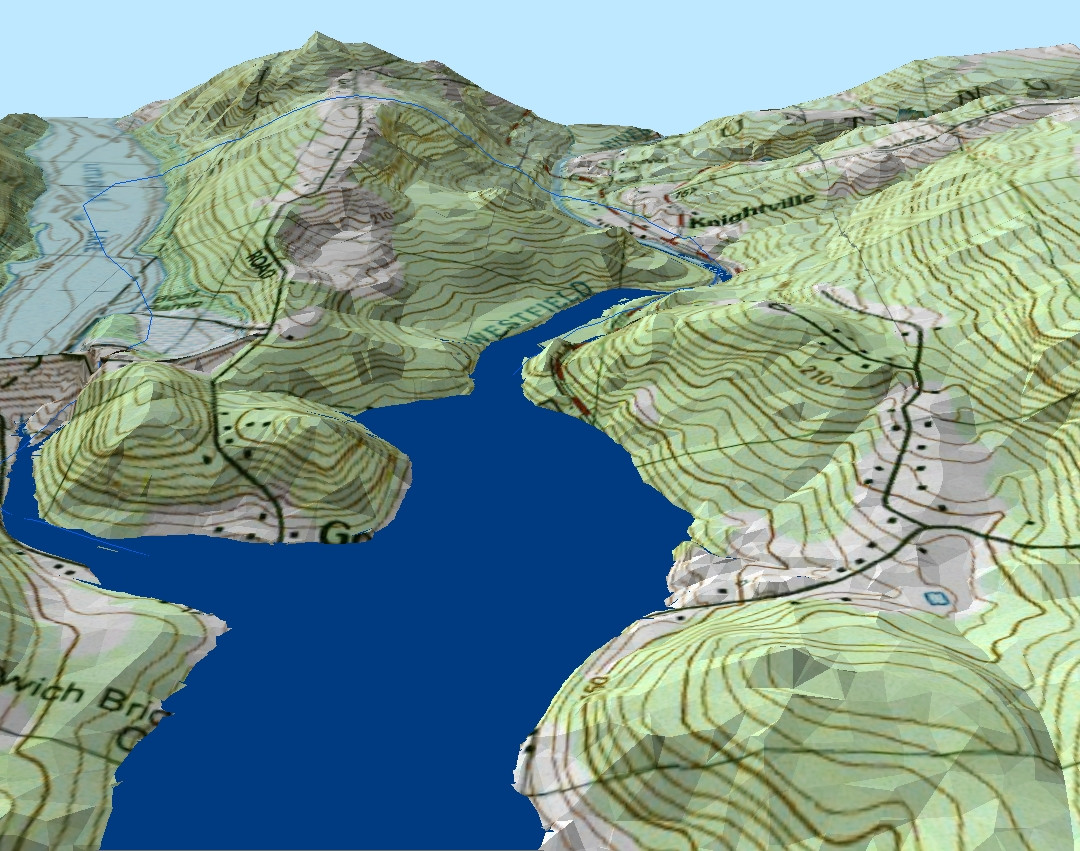 And this is what the terrain would look like after a 30m rise in water levels: 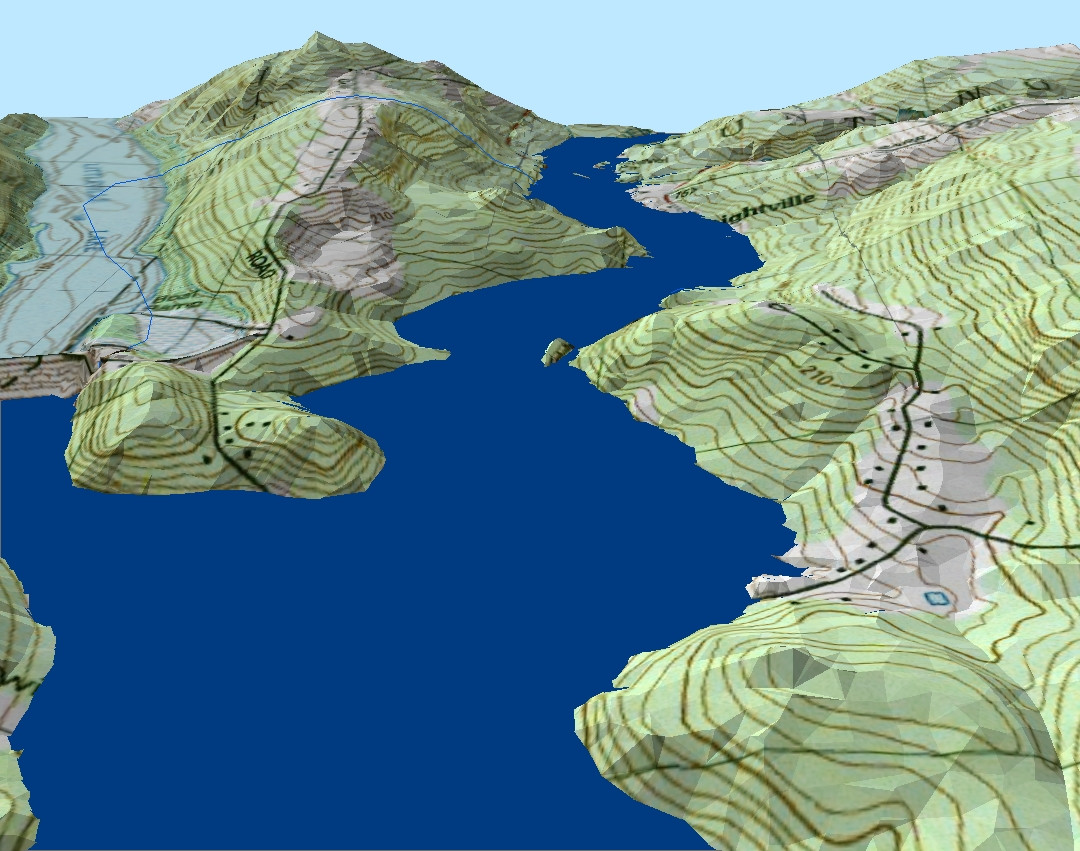 Again, this is just a visual representation of the data and should certainly be taken with a grain of salt. What is the resolution of the DEM that was used? How accurate is the data? Etc. These are questions that need to be addressed before being able to take anything away from this on an analytic point of view.

Still, when it comes down to it, it's important to be able to view your data in different ways, and 3D Vis provides a whole new way to view data that 2D platforms simply can't provide. After all, we live in a 3D world, and being able to capture this added dimension when viewing your map can really help to put things in perspective.

As for 3D it can be helpful with Mobile (Cell) Phone mast placement (locating) even in urban areas with building structures.

Though Google Earth has expanded reach and become mainstream - likely because it is free for personal and commercial use. 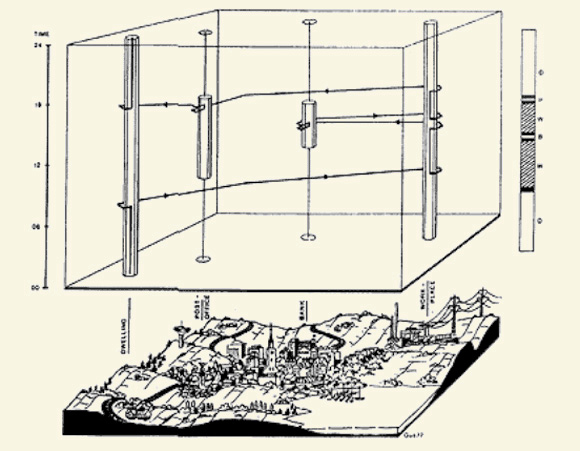 Two names that would be helpful exploring this approach would be

Somewhere between atmospheric data geoviz (mentioned by mankoff) and wow factor (mentioned by Mapperz) is In the Air: "a visualization project which aims to make visible the microscopic and invisible agents of Madrid´s air (gases, particles, pollen, diseases, etc)"

Website provides link to interactive app, unfortunately it did not work for me.

For example, one can gain a better understanding of the effects of soil sealing and the behavior of water flow caused by the same sealing or to analyze the flow of land in case of a landslide

3D visualization is used along with animation in the transportation planning industry. Visualizing traffic movement and flow is extremely useful.

Not the answer you're looking for? Browse other questions tagged 3d visualisation or ask your own question.

72
What Makes a Map be classed as Badly Designed?
11
Creating arcs between two points in ArcPy?
8
What are the main fields of applications of 3D GIS?