I want to connect with polylines the points along the roads which are close each other at a maximum (e.g. 35.0 m) or smaller distance. Any suggestion how to work these out?

The roads turn even to 180° at some points (as shown in the attached figure) and the distance between the roads can be smaller than 35.0 m. 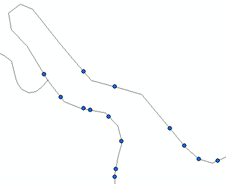 My ultimate purpose is to get the road segments where the points are distant in maximum 35m. 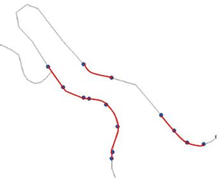 c) I added the length of the lines ([Calculating Line Lengths and Statistics (QGIS3)] https://www.qgistutorials.com/en/docs/3/calculating_line_lengths.html).

d) Then I was able to select those lines longer than my requirement (35.68m in my case) and to delete them (when at Toggle Editing) together with other unsuitable lines created.

e) Afterwards, I ‘Dissolve’ these lines into polyline segments in order to create the proper Buffers at the next step.

Finally I applied ‘Intersection’ between the original polyline-roads layer and the Buffer layer from the previous step to get the polyline segments of my interest.

I had also to apply ‘Multipart to Singleparts…’ to have the segments as individual features at the layer’s Attributes.

Not the answer you're looking for? Browse other questions tagged qgis-3 point line or ask your own question.