I'm working with multiple species distribution data and am looking at creating what amount to density distribution maps of those species. I have a small number of site locations (18) and only 10 species that are being tracked. Each site has the presence of from one to 10 species in values ranging from 1 - 59.

I want to create a layer that shows the density distribution of all of the species at the same time. Heatmaps in QGIS only do point density (is my understanding at least, maybe I'm wrong) and this can be weighted by an attribute, but isn't very accurate. I've done an IDW interpolation and then created contour lines, but the IDW algorithm looses the data from the low value sites and then creating contours excludes the low value sites (i.e. sites with just 1 of the species) as the values are not evenly distributed. See below. 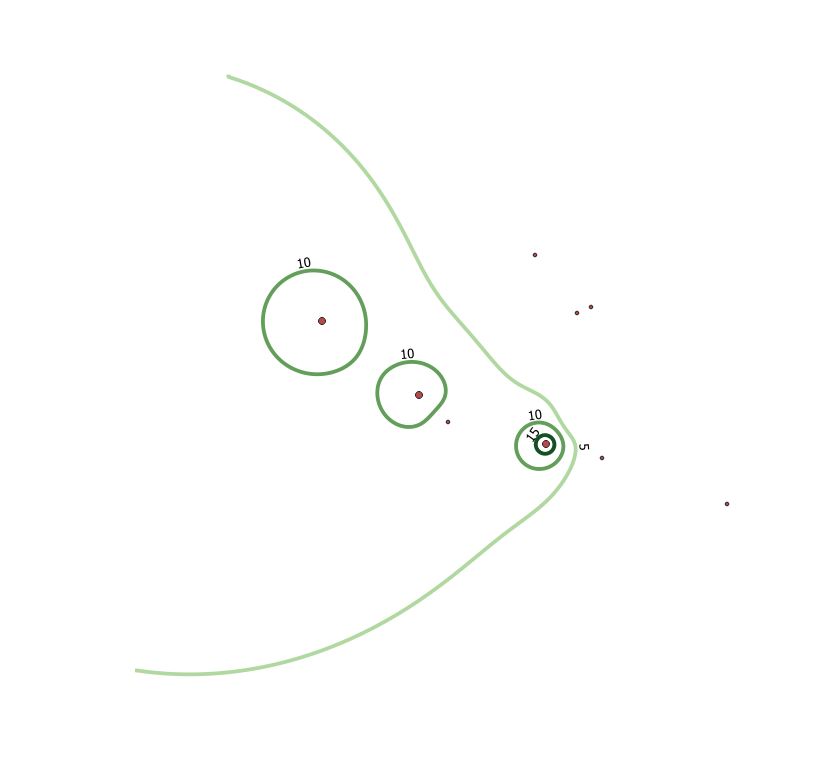 Maybe I'm overcomplicating this, but is there a way to show the distribution of point attribute values that is more accurate and doesn't involve an interpolation that essentially erases the lower values?

idw is an exact interpolator, so if you work with raster outputs and a small pixel size (i.e. you do not generalize your outputs by contours), then you should keep the low values where needed.

You can use smaller p parameters for IDW (i.e. p = 1), then there will be larger weight values around points, and redefine the contour interval to a finer value (i.e. 2).

Or, You can rasterize your points and attach the attribute values to the cells (that will be a spatial distribution map). And then if you would like to amplify small signals, then use a kernel - a high-pass filter on it (e.g. Laplacian Edge Detection). But this will transform your original data, which can be problematic.
https://en.wikipedia.org/wiki/Digital_image_processing#Filtering

You can look after Krigging as well (field of Geostatitics).

Not the answer you're looking for? Browse other questions tagged qgis point contour count distribution or ask your own question.

1
Creating species distribution map?
3
How to create a realistic distribution of cities?
4
QGIS: what is the difference between heatmaps and interpolation plugins?
0
QGIS: display spatial distribution data
0
Spatial distribution based on point data
3
Nearest Neighbor Analysis Results
1
Heatmap based on numeric attributes, not on density for line representation using QGIS