I am attempting to invoke HMS to run headlessly by prompting a batch file containing the following:

The script itself contains the following:

These files are created in accordance to the section in the HMS manual regarding command line operation.

However, when my code invokes the script (or if I run the script myself through the command line, I receive the following error: 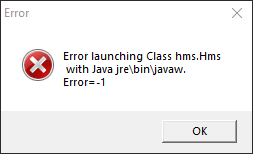 Note that this does not occur every single time that the script is run and I cannot tell that there is any pattern.

My requirements are that HMS run multiple times to satisfy a loop and I can't have users sitting at their desks clicking "OK".

I can see three directions here:

I really hope somebody knows what do to here.

Browse other questions tagged command-line hec-hms or ask your own question.

3
Using Panoply command line scripts
2
How to export a 16bit image from QGIS via command line?
2
Command line GDAL path error
3
Different languages via command line paramaters
1
How to use sqlite symdifference with ogr via command line
0
Use command line to call an FME workbench from a python tool in ArcGIS
0
Parameters of the Muskingum-Cunge Model in HEC-HMS
1
Basin shapefile into HEC-HMS coordinate system issue
0
Accessing data in HEC-HMS that cannot be exported?