QGIS 3.10: Project and Layer have Proj. Coord. System, why is layer tilted?

I was questioning why my map displayed at a +10 degree rotation, but displayed unrotated in the Print Layout.

What I did/do now.

[Harking back to my 4Y3M's-ago question, Project->ProjectProperties->General->CoordDisplay IS set to "MapUnits" as directed by AndreJ, whom thanks again.]

Q. Could someone explain why this is happening, and perhaps suggest another approach, or PCS, to reach my goal; namely, a large-format print of multi-tile b&w elevations? *The corrected steps result in a GCS layer exported to PCS to display squarely/rectilinearly in a PCS project. 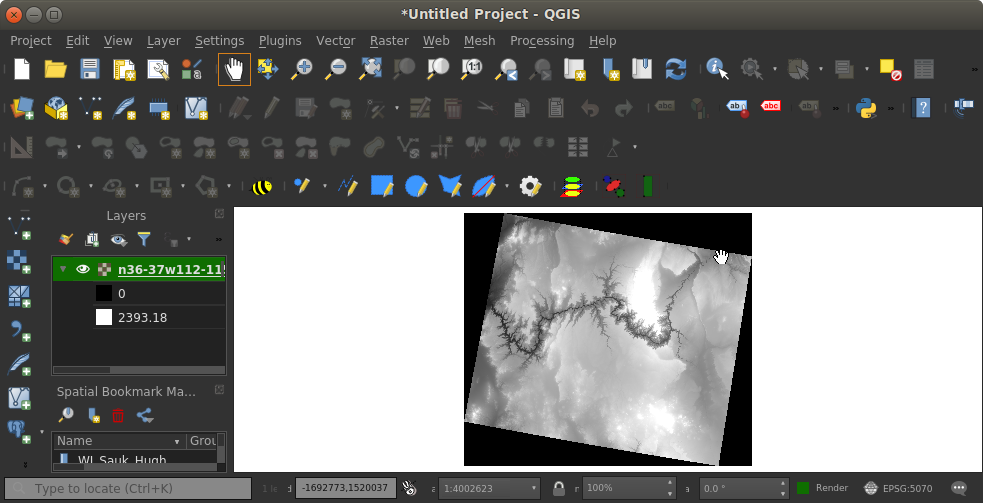 Incidentally, "tilt" may be normal, depending on the coordinate reference system chosen for the projection, and how far from the center one looks.

All projections distort, and in fact, different projections are created to minimize distortion in the area of interest (while distorting areas further away more severely) or by spreading the distortion evenly over the entire area.

My map has 8 tiles spanning 2x8 degrees and when viewed in their entirety, in the projection I had chosen, there is clear curvature along lines of latitude. The tiles on the ends are "tilted" compared to the ones in the middle. My bad luck was to pick one of those end tiles and mistake the tilt for some kind of misprocessing.

[Downvoters: please explain why, or all I can do is guess.]

Here's the answer. I was missing two seemingly innocuous but apparently critical steps; between steps 3 and 4, insert two lines and edit step 4 as a consequence.

Insert steps 3.1 Set VRT Layer CRS to 5070. 3.2 Zoom to that layer (merely to confirm it is rectilinear with the screen: not rotated) 4.[modif.] Export that CRS-modified layer as a Geopkg in EPSG:5070.

Incidentally, this works with single tiles as well as a VRT set. It also worked with UTM12, EPSG:3742.

Summary: in this instance, exporting a layer which has a Geogr. Coord. System (GCS), like say, WGS 84 or NAD83, to file, using a Projected Coord. Sys. (PCS) WITHOUT first changing the layer's Coord. Ref. Sys. (CRS) to a PCS, results in the re-loaded PCS-based file being loaded in a rotated fashion--mimicking the rotation of the original GCS layer.

I will edit my original question to make the correct steps clearer.

[I think this is a bug because users assume the offer to "save as PCS" will perform the nec. steps to have the orientation correct.]

Not the answer you're looking for? Browse other questions tagged qgis coordinate-system print-composer rotate or ask your own question.

5
On the fly reprojection in QGIS?
6
Automatically appending the CRS name in composer?
2
How to correct a Raster with Vector misalignment in QGIS?
3
Using project / layer CRS in QGIS?
2
Convert decimal degrees to meters QGIS
4
QGIS 3.6.1 problems with CRS
0
QGIS 3.10: why is PCS project, loaded with a single PCS layer, showing only geographic (angular, lat/long) coordinates instead of linear ones
1
How does QGIS reproject data onscreen when the project CRS is geographic?