How to have an infinite colour ramp for a choropleth, in QGIS

I have a dataset of land values which, for the full range, is say 125 to 250,000,000, i.e for a whole state. For the user, they will only be seeing on the map canvas, a small subset of this at any one time, i.e for a suburb. But they will want to get a full spectrum on the colour ramp in their area of interest, to tease out the slightest variation in the suburb.

The approach I have taken is to divide the full range into 10 and have pseudo range of 1 - 100% within that sym_rnge. The psuedo range therefore repeats (code below). This is OK, until you get to the edges, when the values shown go from 99% to the next upper set and revert to 1% 2% etc.

I looked at editing the code for the ramp, it is way too detailed I think to edit.

Is there a way to;

I'm not sure what exactly you want to achieve and how users will see the map canvas: in QGIS? The same instance as yours or on another computer? Online? Howver, what you can do is the define the min/max values of your raster for the whole raster file or just for the current canvas. See the documentation:

Calculations of the min and max values of the bands are made based on the: Statistics extent: it can be Whole raster, Current canvas or Updated canvas. Updated canvas means that min/max values used for the rendering will change with the canvas extent (dynamic stretching). https://docs.qgis.org/3.10/en/docs/user_manual/working_with_raster/raster_properties.html#setting-the-min-and-max-values

With this method, you always use the automatically whole range of your color ramp for each screen, it does not depend on the actual value range - in any case, the lowest value displayed in your canvas will get the color on the left, the highest value the color on the right of your color ramp, even if you are zoomed in and the canvas shows only a small section of the overall spectrum of min/max values for the whole raster. 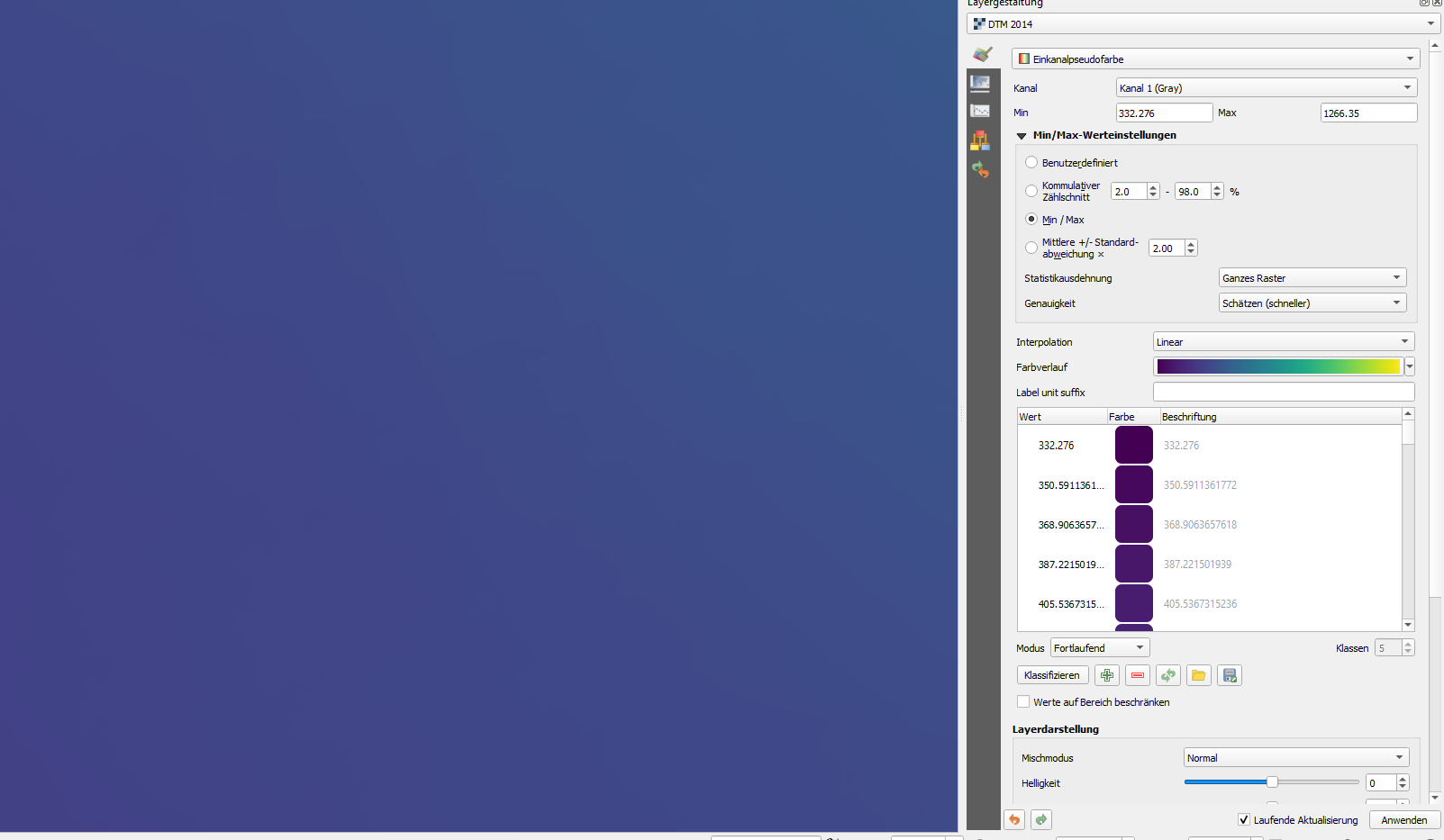 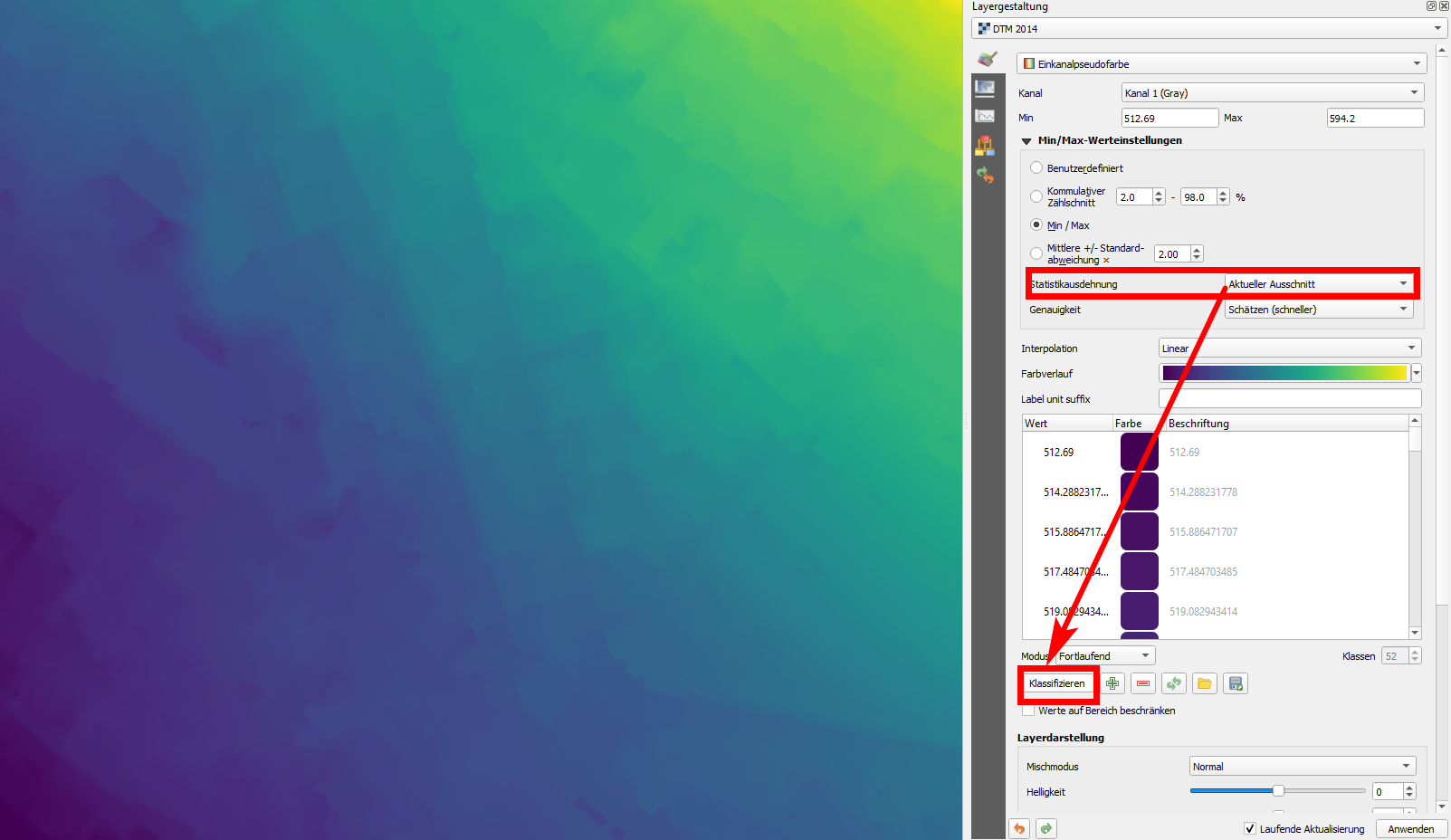 Figured out you can add stops in the editor to give more control than just the two endpoints. The end result 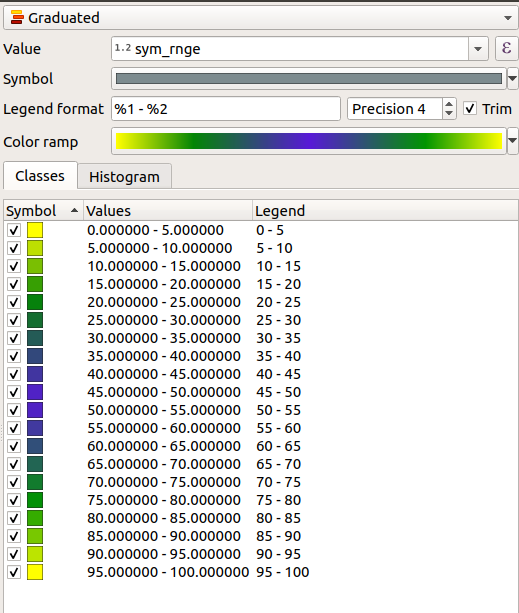 Not the answer you're looking for? Browse other questions tagged qgis symbology style color or ask your own question.

56
Choosing colour-ramp to use for elevation?
8
How to change DEM's gradient colour?
3
How to save colour (color) ramps in QGIS
6
Varying transparency of symbols within single layer in ArcMap
2
Raster statistics - incorrect and apparently arbitrary minimum value
3
Custom color palettes not visible to other layers?
3
How to make QGIS Categorical Symbology Classify only the values that are present (i.e. not provide a category for "All other values")?