I hope this is the right place. I found an 1862 reference to a very specific land location, not from where I live in Melbourne, Australia.

However, when I entered the latitude and longitude into Google Earth it placed the point in the sea. I wasn't really surprised, but am now looking for clues as to how I could transform the two values to 'modern' ones. (eg UTM/WGS84). This is not my area, but I'm ok with maths, Excel, Python etc.

I'd assume it would mean first finding out what the common 1860s Australian (therefore British) projections/datums would have been.

These are the values:

He was an Astronomer so, I assume, was giving the Longitude as a Right Ascension...and we multiply (the decimal longitude) by 15 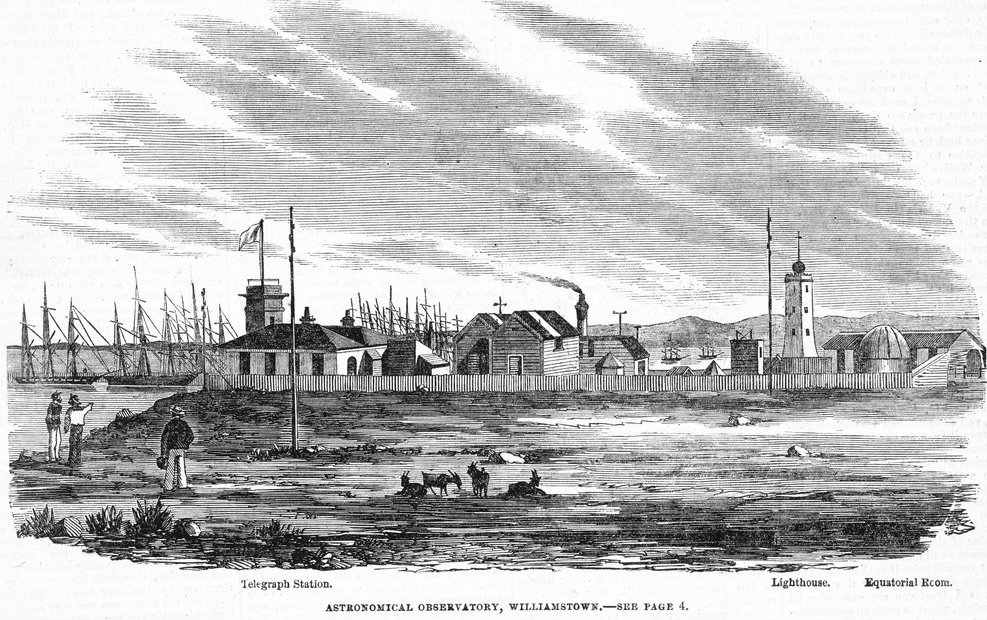 The observatory had transit instruments allowing to determine accurate timing by observing stars, similar to the Greenwich Observatory in the UK. It also served as a standard meridian for the early Geodetic Survey of Victoria (1858-1872)

Here are some interesting links for further reading on the Williamstown Observatory:

Indeed, the coordinates seem to fall a bit offshore when we use the modern WGS84. This isn't surprising, because back then they determined the geographic coordinates of Williamstown Observatory astronomically, which typically can differ from modern values by hundreds of meters, because of different sources of errors in the astronomical method. For example, the deflection of the vertical being around 7"S, 4"W (estimated from EGM2008 geoid), even with perfect instruments and chronometers, they would measure the coordinates to be 7"S, 4"W of the modern coordinate in WGS84.

Since Williamstown served as an important reference benchmark for laying out the Geodetic Survey of Victoria, the rest of the survey follows the then determined coordinate and is "off" by a certain amount when compared to WGS84. Also, the use of a different ellispoid (Clarke 1858) to compute coordinates away from Williamstown also contributes to differences in geographic coordinates when you compare to WGS84.

This old 1874 document seems to report the coordinates of Williamstown Observatory as S37° 52' 7", E144° 54' 42". I don't know if this is the reference coordinate they used, but if we knew them for sure, then it might be possible to calculate an approximate mathematical transformation from that datum to WGS84. Ideally, we would need a reference azimuth, or other reference points, to determine a transformation. There is a drawback to the mathematical approach though; positions derived from surveys back then weren't quite as consistent as today, so transformation errors are still to be expected, but for a relatively small region (eg a city), it could give an interesting approximation. Maybe a transformation already exists, but I haven't found any.

However, if the coordinates you are talking about were determined purely astronomically, then I'm afraid the margin of error of these instruments is too large to determine a consistent transformation.

Prior to 1966, Australian maps used a transverse mercator projection, in yards, with the Clarke 1858 ellipsoid. This was called the Australian National Grid (ANG).

Where in the World… Geodetic Datum Mapping Issues suggests the same:

As an example, in Australia, there are 3 main datums in use: AGD66, AGD84 and the latest one – GDA94. Each of these datums is supposed to reference particular spheroids – AGD datums use ANS (Australian National Spheroid) and GDA uses GRS1980. However, an issue that often occurred in pre-1970 wells and surveys, was the use of an older spheroid – the Clarke 1858 Spheroid.

Not the answer you're looking for? Browse other questions tagged coordinate-system latitude-longitude australia or ask your own question.

4
Seeking Australian Topo Map GeoTIFFs
7
locating latitude-longitude point in a piste-map with matrix transforms
7
Identify what projection this Australian map uses?
3
How to convert to Australian Height Datum from Google Earth elevation?
4
Converting Australian coordinates (EPSG:3112) for mapping in R
0
plotting a circle in a spreadsheet
3
Projection and transform lat,long coordinates in geo in OpenLayers