Trace upstream/downstream for multiple pairs of points in ArcMap

I have two point layers, one is set of origin points and one is a set of destination points, each with 608 points. Object IDs match the origins to the destinations. The points are all snapped to the National Hydrography Dataset (NHD) streams. I am working in ArcMap 10.5.

I need to find the distance between the paired points along the NHD stream network, AND state whether the route is upstream or downstream. 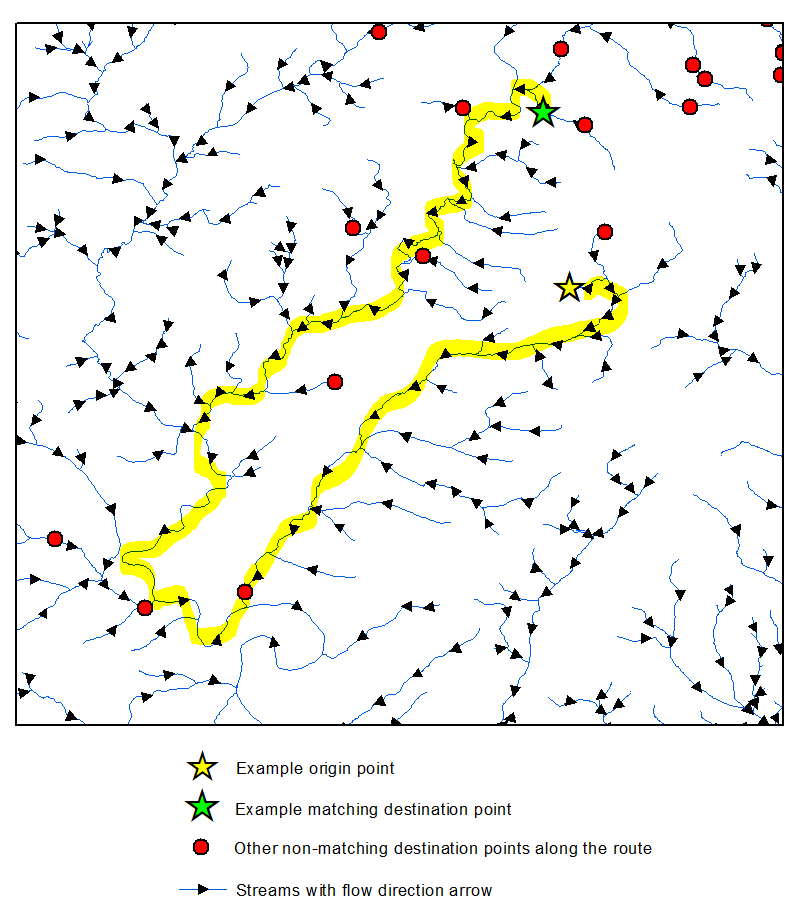 Any ideas for finding the distance and direction along a stream network between pairs of points?

RivEX can link sites, assuming the network is not huge. But I doubt any tool will tell you if the relative direction is u/s or d/s. How do you measure if something is d/s of you, you could initially head down stream then head of up a tributary much further, is that considered "downstream". Elevation won't necessarily guarantee if something is d/s, nor distance from network mouth. Your image starting at the yellow star initially heads downstream then heads upstream, so is the green star upstream? You need to be more explicit about that rule if in fact it is of any value?

Not the answer you're looking for? Browse other questions tagged arcmap network-analyst geometric-network trace stream or ask your own question.

0
Is there a function like XY-to-Line that calculates distance along a network for many XY pairs?
1
arcgis 10.0 od matrix only solves A-A, B-B, C-C, not A-B, A-C, etc
2
Summing multiple routes using ArcGIS Network Analyst
1
Different results in OD Cost Matrix analysis and Route analysis
1
How do I know the IDs of the multiple links that are involved in the shortest distance between any two points in a Network?
1
OD Cost Matrix does not work from every origin to every destination?
2
Added lines to an existing feature class and geometric network are not included in a geometric network trace
1
Calculating incremental closest distance in ArcGIS Network Analyst?
3
Routing with set of points and barriers individually using ArcGIS Network Analyst