I'm using these codes to generate Cell-Statistics, I have data in four different folders but right now I'm using two folders just for the testing but I couldn't get the result. I'm a beginner level of Python user.

Can you help me out with this code?

I'm getting this kind of error again and again: 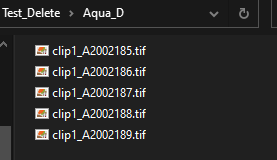 prefix1 = prefix.rstrip("Aqua_D") is just asking for a failure, python is a case sensitive language; it seems to me you want to swap "Aqua_D" with "Aqua_N" so perhaps instead of rstrip and concatenation try raster2 = os.path.join(inws1, r.lower().replace("aqua_d","aqua_n")) then check that both rasters are valid with arcpy.Exists, case isn't important to the file system so using the lower case of the input string won't hurt.

Perhaps the biggest problem is that your file paths don't match your screen shots, the paths you have printed are:

But your screen shot of the Aqua_D folder shows file names like I:\Test_Delete\AQUA_N\clip1_A2002185.tif, I can only assume that the files are similarly named in the Aqua_N folder.. which makes all the path/string modifications redundant:

Not the answer you're looking for? Browse other questions tagged arcpy arcmap batch error-000732 cell-statistics or ask your own question.