Does Calculate Value (Model Only Tool) work correctly in tools run in Batch?

Am I correct that if my model has a model-only tool (Calculate Value), and then I run the model as a batched process, it will not run the Calculate Value expression?

I wrote a model to upload, define, project (and clip) XY data from excel files. I had thought to use iterate tables, but it wasn't working. (I assume due to having to choose which worksheet within xlxs). So I thought to do a batch, but this seems to leave that annoying $ that arc appends to table names (and is an invalid character in most tools...)

My guess is that the Calculate value that removes my $ is not being run in the batch. Ideas? Confirmations?

The Model Only Tool called Calculate Value can be run in Batch.

To prove this to myself I did the following:

Result is the number 29 in the field for each of the five feature classes so the Calculate Value tool was run in Batch.

The "proof" above was poorly designed because only proves that the Calculate Value tool run in Batch gives the right result when Calculate Value is not intended to provide a different answer for each row in the Batch Grid.

The model takes a feature class (which must have an integer as the 5th character in its name e.g. test1, test2) as input, uses Calculate Value to grab the 5th character and return it as an integer so that Calculate Field can add that to the value of a field called Count (always has value of 1) to get a value written into another field called NewCount. Details of dialog settings to accomplish this are below. 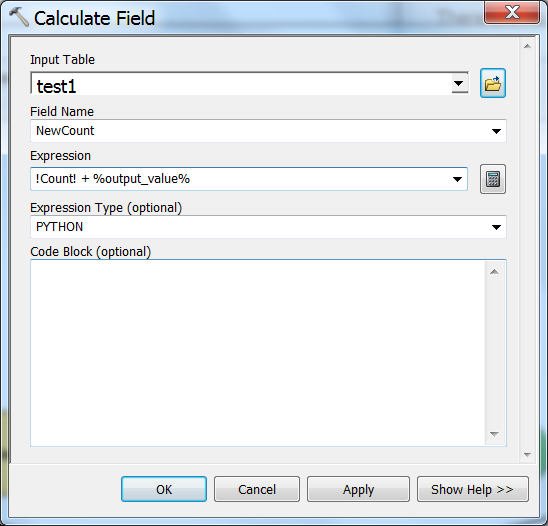 The tool produces the expected result when run using Open or as a Batch with one row.

However, when the tool is run in batch using two input feature classes of test1 and test2 you would expect the NewCount fields to be updated to 2 (=1+1) and 3 (=1+2) respectively. Instead, what happens is that if test1 is in the first row of the batch grid then 2 gets written to both and if test2 is first then 3 gets written to both.

From the following it is obvious that while every other tool gets run once per row of the batch grid, the Calculate Value tool is only getting run once in total.

Feedback from Redlands via local support was "We have tested the case in house and observed that ... Issue is reproducible in house ... this is a known limit with Calculate Value tool ... NIM053898: "Calculate Value tool stops after first expression variable in batch mode (or when defined as a list of values)" Status of bug: Rejected as designed Reasons for rejection: Known limit. Use Iterate multivalue in 10." I'm disappointed that this is being treated as a Known Limit so have asked whether that Status can at least be documented under Calculate Value and Using Batch Grids.

This sounds like the issue described in this thread: Force batch to run processes sequentially

Basically, when you run a model in batch mode, it runs the first step in the model once for each row in the batch dialog, goes to the next step and runs it for each row, etc.

So it is in a way running the processes in parallel instead of in sequence, which can have all sorts of stupid side effects and I have seen no explanation from ESRI as to why it behaves this way.

I've had to wrap many of my models in Python scripts to work around this annoying behavior.

Update: Here's an even simpler test (doesn't use Calculate Value).

What's happening is during the first iteration (batch grid row), it runs the Get Field Value Tool. Then it runs it again. And again. For each row in the batch grid it gets the SAME field value over and over.

When it's done with that it goes onto the Calculate Field tool and runs that for the first batch grid row, then runs it again for the next row, etc., with that same field value, so it never increments.

So in the text output you see something like this:

Not the answer you're looking for? Browse other questions tagged arcgis-desktop modelbuilder batch or ask your own question.

2
Passing each parsed file name to next tool in ModelBuilder?
2
Why are steps out of order when running model in Batch?
0
Does Calculate Value run only once in Batch mode?
1
How to batch a model created with "model builder" in arcmap 10?
5
Is there a bug with the "For" iterator in model builder?
4
ModelBuilder exports the same files when running in batch mode
4
Reclassifying 16,000+ rasters and doing weighted sums on these rasters per year using ArcGIS ModelBuilder?
3
Show feature classes as a checklist in a workspace in ModelBuilder
0
ModelBuilder names not changing with batch operation?
0
Applying batch process with ModelBuilder in ArcMap?
See more linked questions

4
Arcpy remove invalid character
5
What causes ModelBuilder error occurred in script on this page MdDlgContent.htm?
3
Select rasters from a folder that intersect the tiles of a polygon shapefile
1
Extracting a Feature Class' Name, and Adding It to a Field
1
Clearing Calculate Value before Model Run in ArcGIS ModelBuilder?
1
Using multiple Calculate Value tools in Model Builder
3
Substituting inline variables in ArcGIS ModelBuilder?
0
Model Only calculate value with zonal statistics as table