Algorithm "Merge Layers" from SAGA not showing in QGIS Modeler

I'm trying to merge multiple vector-layers via the modeler in QGIS 3.14.1 as a part of a bigger model.

As a matter of fact the QGIS-native "merge layers" algorithm doesn't work here, for the layers to be merged have some different data types, due to the layer creation by a different software, which should not be the topic here.

So I need to use the SAGA-algorithm "merge vector layers", which used to work out fine in previous versions of QGIS (up to 3.12), but now it does not show natively in the toolbox or the modeler.

After I check the Box "show algorithms with issues" in the processing preferences, the mentioned SAGA-algorithm shows up in the toolbox, marked with a special warning (see picture below), but it works as usual without any errors or problems. 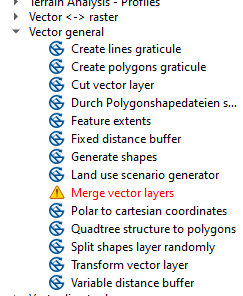 But: In the modeler the algorithm is still not available, so I still can't use it for my model.

Anyone knows a solution for this?

I tested it both on a Windows and on a Linux System, it's exactly the same issue.

The use of the QGIS-native "merge layers" algorithm is not an alternative here, for I cannot influence the creation of the input layers.

As a "Quick and Dirty" Workaround I can build a "fake"-model in QGIS 3.12 (or earlier), using the SAGA-merge-algorithm and save the model.
Once I re-open the Model in QGIS 3.14, the SAGA-merge-algorithm shows up (only in the "fake"-model, not in modelers toolbox.
Then I can copy the algorithm from the "fake"-model, paste it directly into my actual model and modify the settings there as needed.
By this workaround, the algorithm works as it should in QGIS 3.14 and I dont't have to switch between different versions of QGIS anymore...